Cloudy in the West by Elmer Kelton

.
.
Read, enjoy but don’t expect greatness
.
.
Elmer Kelton (1926 to 2009) wrote a large number of Western novels which were always competent, sometimes pretty ordinary, fairly predictable but worth a go if you haven’t got a truly fine Western to read.
Texas, 1885. Cloudy in the West (Forge, New York, 1997) is a straight coming-of-age tale about a boy of twelve, Joey Shipman, whose parents die, leaving him with a wicked stepmother, Dulcie. The character of Dulcie is overdrawn and she is impossibly nasty to the boy. Her smarmy new husband, Meacham, is nice to the lad but he and Dulcie would inherit if the boy were out of the way…
.
. 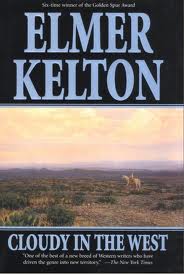 Better for youngsters really
.
Joey runs away to find his likeable ne’er-do-well cousin Beau and they team up. They get into various adventures as they travel West. Most of these are well-telegraphed in advance and the novel has the air of a TV Western in that way, as it does in its rather anodyne language and action. For example, there are enough references to the famed outlaw Miller Dawson for the reader to know damn well that Miller is going to appear in the story and Joey and Beau will ride with him.
Still, the characters (apart from Dulcie) are quite well drawn and fairly interesting, like the sheep herder Mr McIntosh, with whom they join up.
.
. 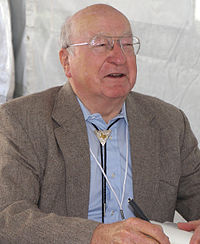 EK
.
You can see the ending coming too, so no great surprises await.
.
.
Boys of twelve would probably like it.
.
.
On the cover of my paperback edition the author is described as “The greatest Western writer of all time.” This is palpable nonsense. He is nothing of the sort. But he does give you a solid read in a rather staid way and I wouldn’t want to be dismissive of Elmer Kelton books. Read them, enjoy a bit of escapism, but don’t expect greatness.