The Bounty Hunters by Elmore Leonard

.
.
The scalp trade
.
.
The Bounty Hunters was written in 1953 and was Elmore Leonard’s first Western novel. One of the most striking aspects of it is how modern it seems. True, it is more discursive and descriptive than Leonard’s later work but it is already terse and economical in style and already a lot of the action is advanced in the dialogue. When you consider that it was written in the same year as books like Louis L’Amour’s Hondo or Luke Short’s Silver Rock you realize how ahead of the game Leonard was. If you were told before starting to read The Bounty Hunters that it had been written in the 1990s, you’d believe it.
.
. 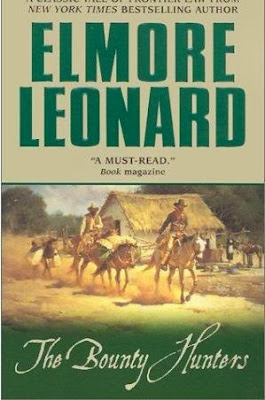 .
It’s the story of a tough, experienced Army scout and a young, green but brave officer fresh from West Point (common figures in Leonard fiction), both in civilian dress, sent by a colonel, the Adjutant of Arizona, who has his own (nefarious) motives, on an undercover mission south of the border to find and bring back the Apache chief Soldado Viejo.
They arrive in a village run by corrupt Rurales and come up against a very nasty gang of American renegades, in league with the drunken Rurales lieutenant. This gang is hunting scalps for the bounty the Mexican government pays for Apache hair. So it’s a complex interaction of goodies and baddies. It’s further complicated by dissensions within these ranks as the Rurales sergeant foments mutiny against the lieutenant and a lone but independent gunman joins the ranks of the bounty hunters.
There was indeed a grisly trade in scalps in Mexico. Sonora was the first state to offer a bounty, in 1835, 100 pesos for the scalps of braves (a peso was roughly worth an American silver dollar). Soon after, Chihuahua enacted a similar law offering a graded bounty: $100 for braves, $50 for squaws and $25 for children under fourteen. To prevent fraud, “scalps” were defined to include one or both ears or the crown (otherwise, a fresh scalp could be stretched before it was dried and cut into up to a dozen “scalps”). Regulatory committees were established to examine scalps but these were often bribed.

Many of the scalp hunters were former Texas Rangers searching for quick cash. Some of the more famous include Major Michael Chevallie (who appears as a character in Larry McMurtry’s Dead Man’s Walk), James Kirker, Capt. Michael Box and John Joel Glanton (who, in a fictionalized version, appears in Cormac McCarthy’s Blood Meridian). By 1850, indiscriminate raiding of innocent villages was resulting in hundreds of scalps being taken (in one single raid Glanton took 250 scalps) and the states had difficulty in finding the money for the bounties. Indian chiefs started offering huge bounties for the scalps of the hunters in retaliation. Glanton had a reward on his head in Chihuahua and he relocated to Sonora before the Yumas killed him. Kirker and Box were run out of Chihuahua and Durango and ended up in California. Although the bounty laws stayed on the books until the 1880s, the gruesome trade was really over well before this.

There is no known picture of John Glanton but in his memoirs My Confession: the Recollections of a Rogue, Samuel Chamberlain (above) tells of his time with the Glanton gang
.
Like most of Elmore Leonard’s Westerns, you get a real sense of place. The stripped-down language suits the spare, arid landscape and you don’t get a lot of purple prose describing countryside or weather yet you are somehow able to ‘see’ the setting. It’s well done.
Of course the two central characters, Flynn the scout and Bowers the Army officer, are typical, tough Westerners, savvy, brave and enterprising. And naturally the alcade of the village has a beautiful daughter. But they aren’t cardboard cut-outs. They come across as real people.
.
. 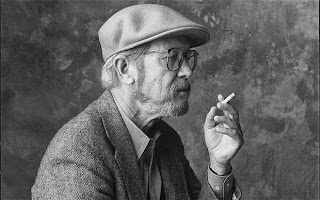 Elmore Leonard (1925 to 2013)
.
The bad egg colonel gets his come-uppance and Flynn gets the girl – I don’t think it constitutes a spoiler to tell you that.
300-odd pages of tight, gripping Western paperback. There is a quote from Book magazine on the cover of my Harper Torch edition. It says “A must-read”. A rare example of publisher’s blurb being correct.
.
PrevPreviousReturn to Lonesome Dove (CBS TV, 1993)
NextThe Westerns of Jack PalanceNext