.
.
Diluted
.
.
There’s a limit to how much Lonesome Dovery one can take. When you’ve read the four novels by Larry McMurtry and seen the corresponding TV mini-series, and met so many different Captain Calls that you’ve got totally confused (he was tall, short, fat and thin), when you’ve seen the making-of documentaries and even done the trivia quiz on the DVD, hell, you’ve probably even bought plastic figurines of Gus and Clara, it all becomes a bit debased.
.
. 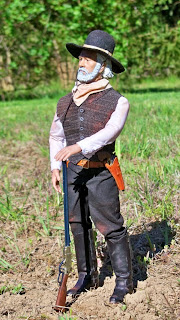 Got your Call figurine yet?
.
And it’s not helped by the fact that apart from Lonesome Dove itself, which was a wonderful Dickensian novel and a splendid TV show, the other mini-series bear the hallmark of family-friendly blandness. In that curious American take on Puritanism, it’s perfectly acceptable for young children cherished by their parents to (1) watch people shooting lead bullets into other people and causing horrific and/or lethal gunshot wounds, but not at all acceptable to (2) show people making love to one another or saying “shit”. Guess which of the two people (including the said cherished brats) always do.
There’s something creepy about the Hallmark channel. Certainly they manage to take any known work of literature and reduce it to pap. And when they don’t even have a work of literature to start with, the pap-making propensity is unrestrained.
For Return to Lonesome Dove was a McMurtryless sequel. The TV people got so fed up with waiting for Larry to pen the further adventures of Call that they went ahead without him. The series was written by John Wilder, the writer and executive producer of Centennial. It was skillfully done, technically speaking, but lacked the spark. In fact it becomes tedious. It was directed by a certain Mike Robe who had done only one TV Western before, a Custer story, Son of the Morning Star (1991).
.
. 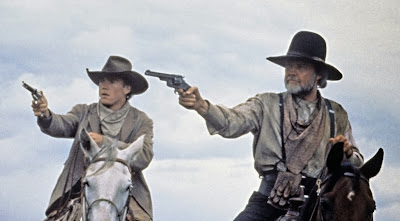 Schroder is back as Newt but Voight replaces Jones as Call
.
Tommy Lee Jones refused the part of Captain Call, tragically or not, in favor of The Fugitive, so Jon Voight, penciled in as Fugitive star, went to Montana to be Call. He was alright, I guess, though apart from when he is energetically running the arrows (they had to put that in), he often seems plain bored. Rick Schroder and Timothy Scott are back, as Newt and Pea Eye.
.
. 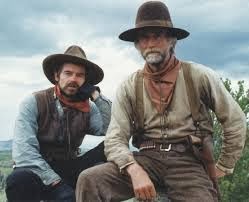 Scott is Pea Eye again. He’s very good.
.
I think that McMurtry killed off Newt in a one-line aside in his book Streets of Laredo just out of annoyance at what the writer of this series did to him. Lippy is there (William Sanderson), but only with almost a walk-on part. July Johnson (Chris Cooper) is back too; he has a bit more to do (he’s preposterously supposed to fall for Gus’s illegitimate daughter). Schroder, Scott, Sanderson and Cooper do manage to give some continuity. And peripherals such as the music and some of the sets do too. But once again we have to get used to key characters being played by different people.
Barbara Hershey (the archaeologist in Last of the Dogmen) is now Clara. She nags as tiresomely as previous Claras. Lightning deservedly strikes and her house burns down. Lorena did most of the nagging in McMurtry’s real sequel, Streets of Laredo, but she doesn’t appear at all in this one; she’s gone to San Francisco, at last.
.
. 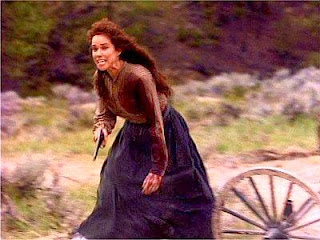 Why anyone would fall for Clara is a mystery
.
New characters are brought in, notably William Petersen as ex-Ranger Gideon Walker, who unwisely sets his cap at Clara. He’s not bad, though if he was supposed to provide a Gus-type figure, he flops in that.
.
. 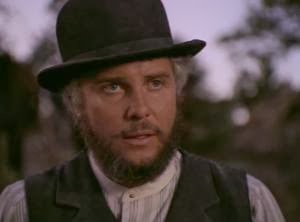 Petersen as a Gussian ex-Ranger
.
Louis Gossett Jr, the war film guy, is the Deetsian character, Isaac. Oliver Reed is the ruthless rancher and he is very poor. Quite dreadful. He attempts a Scots accent (he was more expert at Scotch than Scots). He may have been OK buckling swashes but he was sure lousy in Westerns, as The Trap, The Hunting Party and The Great Scout & Cathouse Thursday proved. Surely they could have got someone who could ride.
.
. 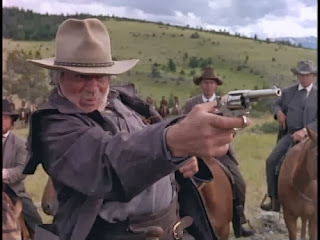 Reed very poor
.
Reese Witherspoon is also very weak as the rancher’s young wife, with shockingly modern diction. She comes across as a 1990s California babe, though I’m sure she isn’t one. The Blue Duckian evil bandit part now necessary to the formula is taken by Dennis Haysbert as Cherokee Jack Jackson. He doesn’t have enough scope to be evil enough. It was his only Western. Phew.
.
. 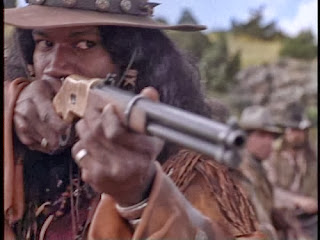 The standard villain
.
The scenery is very nice, though much of the photography (Kees Van Oostrum) is filtered to appear sugary/nostalgic.
I’m afraid I’m all Lonesome Doved out.
.
.
Please don’t ask me to review the TV series.
.
PrevPreviousApache Territory (Columbia, 1958)
NextThe Bounty Hunters by Elmore LeonardNext