.
.
Poor acting, writing and direction
.
.
Ray Milland, as a tough Army-deserter who guides an 1840s wagon train (he could only really do suave), and Barbara Stanwyck, as a gambler/possible prostitute run out of town, go out to California. Stanwyck, who had a strange inability to keep her mouth closed and must have caught a wagonload of flies, is expelled by prim ladies, rather like Dallas in Stagecoach.
The pair develop a love/hate relationship, though we already know from the first reel which of the two emotions will prevail, and that’s one of the weaknesses of the film.
.
. 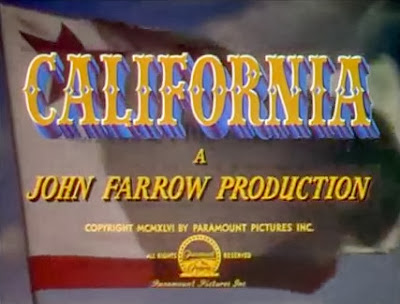 A bit of a turkey
.
The direction, by John Farrow, is uneven – that’s the polite word. Australian Farrow never really understood the Western and Hondo was the only good one he directed (and he didn’t even finish that one). California, though, is at best a semi-Western and is really more an adventure-romance. Some parts of the movie drag. At one point a wagon train participant complains to Milland that it’s going too slowly and wants it to speed up. He is talking for the whole cast and audience, I think. At other times, the action is breakneck with huge amounts of plot being crammed into brief minutes of screen time.
Perhaps the worst aspect of the movie is that it is nigh on a musical. Not that I’ve got anything against musicals as such. If people like musicals, by all means let them watch them. But I personally don’t want Hollywood choirs singing patriotic anthems in my cowboy films, thank you, and this movie grinds to a halt every few minutes for a song. Four minutes in from the start and we are still having a “stirring” overture (punctuated with dreadful folksy sayings). After 11 minutes the camped wagon trainers burst into song. 28 minutes in, Stanwyck sings in her saloon. Later she sings at a big party too. That’s enough songs! Grief.
.
. 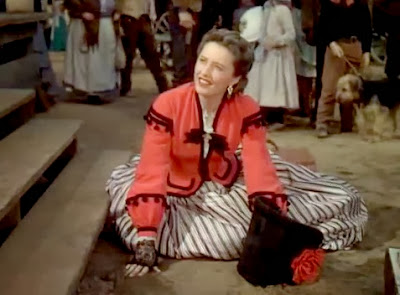 Stanwyck as saloon gal run out of town
.
The Victor Young score, one of those written afterwards, tries to synchronize with the action – clashing chords with each knife thrust, that kind of thing – and is mostly grandiloquent and overdone.
One good thing is the Ray Rennahan photography. It’s a big color movie with a whopping Paramount budget and the scenes as the wagons pass through Arizona and are let down bluffs on ropes (all wagon train movies were obliged to have that bit in) are really quite impressive. There’s a great deal shot in the studio too, mind. Those sound stages never quite convinced, did they, even when they were enormous.
.
. 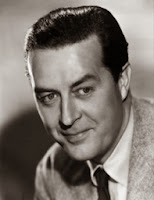 Milland. Rhymes with bland. Miscast.
.
Anthony Quinn is in it (one of the reasons I watched it) but it’s a disappointment: he doesn’t appear till 53 minutes in and has a very short part as Californian grandee Don Luis. He’s good, though.
Of the other actors, best was Dubliner Barry Fitzgerald as the honest farmer who is elected as delegate to the Monterey convention on statehood. Nice to have an Irish accent done by a real Irishman for once. He disappears, though, for all the middle part of the film and it’s a bit odd; you think he’s been written out. Other familiar faces are there: Frank Faylen as the rustic Whitey and Albert Dekker as the villain’s henchman – they both do a good job – and you can spot Frank Ferguson as a cavalry lieutenant. Everyone else, including the chief bad guy, Brit George Coulouris as an evil ex-sea captain, and indeed the stars too, are a bit ho-hum.
.
. 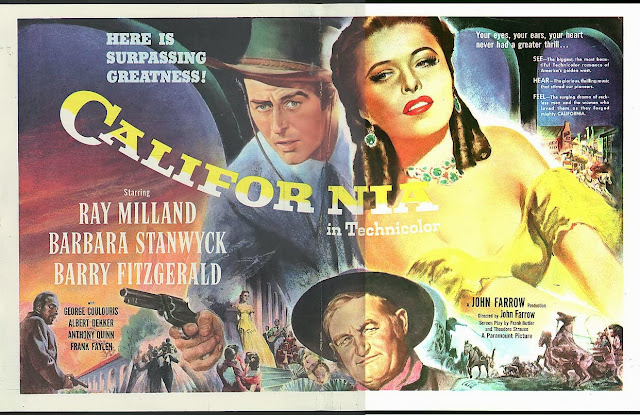 Surpassing greatness, my foot
.
It all actually reminded me of a Cecil B DeMille picture, overblown, turgid, colorful, ponderous, and not a proper Western at all.
.
.
Historical bosh but much more fun on the founding of the California Republic is the 1940 Kit Carson. Watch that instead.
California? Skip it.
.
PrevPreviousThe Young Land (Columbia, 1959)
NextPillars of the Sky (Universal, 1956)Next

PrevPreviousThe Young Land (Columbia, 1959)
NextPillars of the Sky (Universal, 1956)Next
Jeff Arnold © 2022 – All rights reserved – Designed by BetterCallChris
Scroll Up