.
.
Heart-warming
.
.
Lou Diamond Phillips, of Spanish, Scottish/Irish, Chinese, Filipino, Hawaiian, and Cherokee ancestry (which is probably why he is Cheyenne in Longmire), was in both Young Guns movies and then, Westernwise, did a Hallmark TV oater, The Trail to Hope Rose.
What can we say? It’s Hallmark. So it’s ‘family friendly’ and slightly saccharine. Killing is allowed (that’s OK for young children) but no making love (that could damage them irreparably), and it’s all generally heart-warming.

I’m afraid I’m never too keen on Westerns that are heart-warming. Heart-warming is not really an adjective that ought to apply to Westerns, in my book. But there we are. Heart-warming it is. It is only missing a couple of puppy dogs. It had all the rest: cheery old grandfather, angelic child, good triumphing over evil, bucolic ranch, true lerve. I’m probably cold-hearted and need to watch more of these heart-warming pictures.

.
.
But I don’t think I could stand it.
These movies usually wheeled out a couple of big stars, or stars in the descendant anyway. Ernest Borgnine became Andy Devine. He had the girth and the chuckle. In his final scene, as he chuckles his goodbyes, I swear it was Andy Devine. He plays the old guy who befriends Lou Diamond and his gal.
.
. 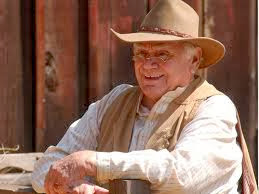 Ernest doing his Andy Devine impression
.
The gal is played by Marina Black. They always have pretty women with modern diction, perfect skin and sparkling teeth to play saloon gals, whores and laundresses. They speak in an educated way and are all respectable.
.
. 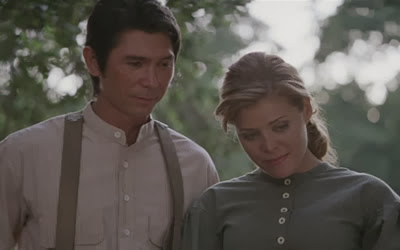 Sweet
.
Lee Majors is ‘Marshall’ (sic) Toll. They often confused the name of Marshall with the office of marshal. He is a bought-and paid-for lawman in a town treed by evil mine-owner Drigger (B and TV Western stalwart Warren Stevens, in his last Western). Of course the marshal(l) eventually stands up for right. He dresses all in black.
.
. 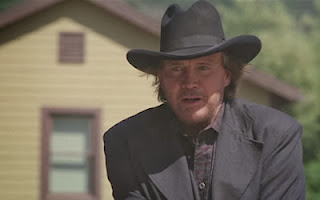 Marshal in black
.
There are various henchmen. The idea is to make these so evil that it excuses the good guys shooting bullets into their bodies; indeed, it is the recommended course of action. Making them so evil is the job of the hack writer and the make-up people (the henchpersons need disfiguring scars, of course).
It’s an entirely predictable tale of an ex-con trying (and succeeding as we know he will, so I am giving nothing away here) to go straight.
Watch it if that’s your thing. Ernest’s Andy Devine impression is mildly amusing but unless you’re a fan of the heart-warming genre, I’d skip it, honestly.
.
PrevPreviousKilloe by Louis L’Amour
NextTelling Western StoriesNext