.
.
Dashing Errol
.
.
This Western is fun in a 1945 kind of way. It was produced by Robert Buckner, who wrote Errol Flynn’s first three Westerns, and it was written by some big names: Alan Le May, of The Searchers fame, and WR Burnett, the Little Caesar and Scarface guy who contributed to some good Westerns too, such as The Westerner and Yellow Sky. It was nominally directed by non-Western director David Butler, his first oater at the helm (and he wouldn’t do much special after either) but Robert Florey and also Flynn pal Raoul Walsh (Flynn wouldn’t work with Curtiz anymore) are also said to have worked on it, both uncredited. It has some Walsh get up and go all right.
Flynn was a changed man after his trial for rape in 1943. He had been acquitted but was definitely chastened. Thomas McNulty, in his biography Errol Flynn: The Life and Career, says, “The egomaniac who had caused delays during the filming of Santa Fe Trail had been replaced by a courteous professional. Flynn let his carefree personality carry him through the drudgery and long hours of filmmaking. His co-stars, the extras, and the always cynical Warner Bros. crew now looked forward to working with him.” That was new. He was also growing to like the genre he at first distrusted. He knew his Westerns were popular (all four had been big hits) and was glad to be back in the saddle after what could have been a career-ending moment.His worsening alcoholism, however, was a handicap. 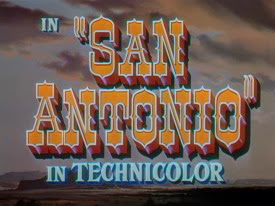 .
In San Antonio Errol is Clay Hardin, not a badman gunslinger as his portmanteau name from Clay Allison and John Wesley Hardin might suggest, although he is on the run. He’s a cattleman whose cows have all been stolen by slimy villain Paul Kelly. Errol’s pal Charlie Bell (John Litel in red and white check pants) helps him get back to San Antonio to brace Kelly and put him in jail. There’s loads of skullduggery, and the skullduggers fall out among themselves so then there’s even more.
.
.
The picture might well be described as rip-roaring. It has action and pzazz. The Bella Union saloon is really impressive, as is the gunfight that happens in it in the final reel. Acrobatic stuntmen fall from balconies to crush tables and a piano rolls down the stairs. Quiet it ain’t. There’s some very nice cinematography (Bert Glennon this time, not Sol Polito) in glorious Technicolor – the three Westerns since Dodge City had been in black & white. The sets were Warners-lavish and Calabasas Ranch exteriors very nice. Jack Warner splashed out: this one was budgeted at $2.23m, twice the amount of the previous oaters.

.
.
There’s shootin’ and gallopin’. The whole movie rattles along at a cracking pace.
.
.
Flynn was very dashing with his pistol on his belt and an elegant frock coat. The inevitable lerve interest is provided, faute de Havilland, as it were, by Canadian Alexis Smith as actress Jeanne (rather than Belle) Starr, incredibly 1940s looking in hairstyle and make-up. Well, it was the 1940s. McNulty says, “she added her blend of ladylike composure which always seems to be on the verge of dissolving in Flynn’s presence.” 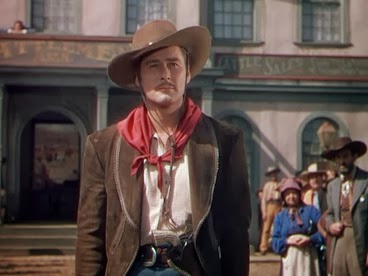 .
The fat comic relief is provided by SZ ‘Cuddles’ Sakall who does the standard English language-mangling foreigner act. Maybe it was a dig at Michael Curtiz, who famously never fully overcame the language barrier. The partner baddy, just as skunky as Kelly (for this a two-villain picture), is Belgian Victor Francen as a New Orleans crook, Laguerre, with suspiciously black hair and make-up applied with a trowel. His hat’s great, though.
Missing were Flynn drinking buddies Alan Hale and Guinn ‘Big Boy’ Williams, who had sidekicked him in earlier outings in the saddle. But good old Monte Blue is there and if you don’t blink you won’t miss Francis Ford and Chris-Pin Martin. Furthermore, Flynn gets to gun down former cowboy matinee idol Tom Tyler. 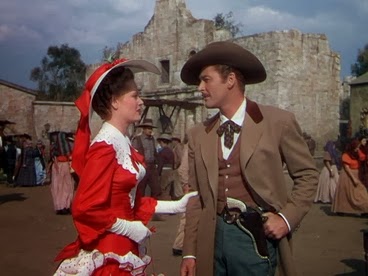 .
There are two pretty cheesy songs by la Smith to sit through (one, incredibly, Oscar-nominated). Most of the music, though, is based on the Max Steiner Dodge City score, and is pretty high-octane because of that. There’s a drunken cat. There’s a cowboy gang backing Kelly up called The Wild Bunch. There are one or two good lines. “This town is full of men,” opines Jeanne, “who look as though they’d step on baby chickens.” And in a way it’s The Alamo II because Errol tells Jeanne how brave Texans didn’t die there for later ones like him to give up. The Bella Union gunfight spills out onto the plaza and finally ends in the ruined Alamo.
.
.
The picture did reasonably well, but took some time to make back its big budget. It was the Flynn/Warners formula as before but maybe that was the problem. McNulty says that “its familiarity worked against it. Audiences had seen it all before.”
.
.
No one would pretend that San Antonio is a great Western. It’s a fast-moving, commercial oater with no art pretensions whatever. But it’s a lot of fun.