.
.
Slim loads a Winchester at full gallop
.
.
I really like The Outcast. It’s an unpretentious Republic Western with weaknesses, yes, but with a lot of strengths. It’s actionful, zippy and enjoyable, and has some excellent performances.
The 1951 Randolph Scott movie Man in the Saddle was also known as The Outcast but that was different. This one stars one of the weaknesses, John Derek (1926 – 98), aged 28, known, if known at all, as Bo’s husband, for his Joshua in The Ten Commandments and for being pipped at the post in the Worst Achievement in Film Award for his direction of Tarzan, the Ape Man, beaten by Michael Cimino for the megaturkey Heaven’s Gate. Derek was in 41 big- and small-screen Westerns and The Outcast was his third. He had lustrous black hair but limited thespian talent. Still, to be fair, he does manage the action scenes of the Western well and leaps athletically onto a horse.
.
. 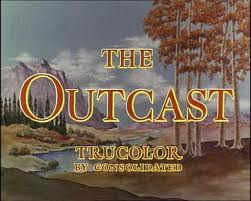 Nice color anyway
.
Luckily he is compensated for in the dramatic stakes by the other actors, some of whom are excellent. We have stalwart Frank Ferguson (always good to see) as the paterfamilias of the Polsen clan, decent farmers run off the range by ruthless cattle baron Jim Davis. Jim Davis, as doubtless you know, though best known as Jock Ewing in Dallas and for being the low-slung holstered railroad detective Matt Clark in all those Stories of the Century TV shows, started off at Republic and was in wagonloads of that studio’s Westerns. In The Outcast he was in his mid-40s and looked really good in his gray frock-coat as the tough but dishonest rancher, enemy of Frank Polsen-Ferguson.
.
. 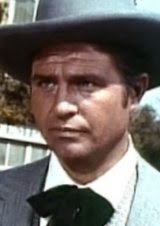 Jim as unscrupulous cattle baron
.
Patriarch Frank’s sons are good too. They are Zeke (Robert ‘Buzz’ Henry, a stunt man who often doubled for Frank Sinatra, Glenn Ford and James Coburn), young Asa (Nicholas Coster) and, best of all, Boone, the eldest son, played by Slim Pickens. Slim, as we know, was hardly accurately named but for such a big man, boy, could he ride. It’s worth watching The Outcast just to see Slim loading a Winchester at full gallop. Buzz Henry was pretty good, too. The action on this film is very well done.
.
. 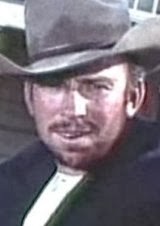 Slim he ain’t
.
And then we have James Millican as the cattle baron’s foreman/hired gun, Harry Carey Jr as one of his henchmen hands, and the excellent Bob Steele as the gunman hired by the hero who turns out to be a bad egg and changes sides. He shoots the inoffensive cook in the back. Oo, that’s mean. Mind, I’ve known a few cooks I’d like to shoot in the back. I also liked Nacho Galindo as another goon, the portly Curly. And there’s even Hank Worden as the barman. Good stuff. Low budget these Republic oaters may have been but you certainly got your ten cents’ worth.
.
. 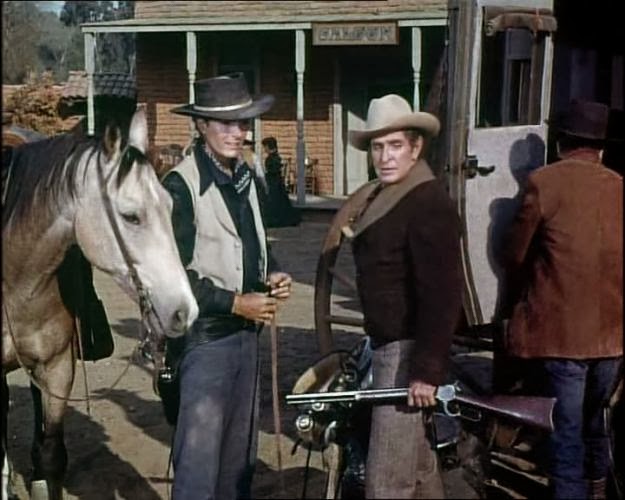 Bob Steele arrives on the stage to command the gunmen
.
The female leads were slightly less stellar. Catherine McLeod (known for her soapy romancers) has come out to marry Jim Davis, not yet realizing what a rogue he is, and Joan Evans (Anne in the Audie oater No Name Bullet) is the Polsen farm girl who falls for Derek.
All in all, though, the acting is either satisfactory or downright good.
Director William Witney (1915 – 2002) came from Mascot to Republic, and learned pace and action, especially fight scenes at which he excelled, on serials. He is credited in some way or another as having participated in 270 Westerns. Respect.
.
. 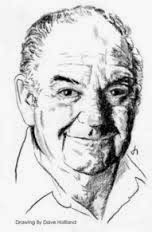 Director Witney
.
Another of the weaknesses, though, is the writing (John K Butler and Richard Wormser screenplay from a Todhunter Ballard short story in Esquire), with plodding plot and wooden lines. Still, it’s a Republic Western; we’re not talking The Searchers here. You want art?
More than watchable, though, I’d say.