.
.
For dyed-in-the-wool Johnny fans only
.
.
Boot Hill Brigade (or Boothill Brigade), which has nothing to do with Boot Hill, is a very standard Republic 56-minute B-oater with Johnny Mack Brown. With all the will in the world, it can’t be called a great film.
Johnny, who has a top-of-the-range holster and shiny pistol (probably Nieman-Marcus) and rides a fancy high-steppin’ white horse, is a small rancher in a tale of big rancher drivin’ homesteaders out of the valley. Of course he tries to keep the peace but is driven to fight. The story is complicated by the fact that Johnny is in lerve with the big rancher’s daughter, Claire Rochelle.
.
. 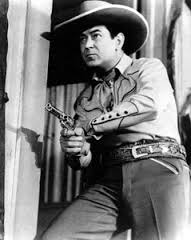 J Mack Brown Esquire
.
Naturally, it turns out that the big rancher (Frank LaRue) is being manipulated by some city slicker in a suit, Ed Cassidy. Johnny soon deals with him.
It’s one of those cowboy films where everyone always gallops everywhere. No one ever walks or trots a horse.
There is no music at all, apart from the intro and final credits, and while probably done for cheapness it is actually quite a pleasant relief occasionally.
.
. 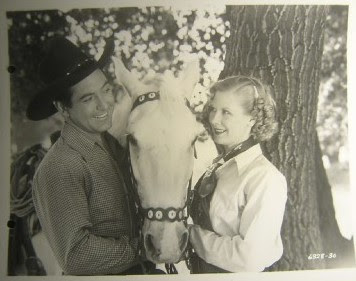 It’s supposed to be New Mexico but is very patently on the back lot behind the studios in California, complete with 1930s telegraph poles.
Horace Murphy provides the fat-man comic relief. He is the cook, with a shotgun named Betsy. Actually, there are only a few gunshots at the end as the posse pursues the badmen. Most of the film is gunless and, frankly, a bit preachy.
It was directed by legendary Poverty Row helmsman Sam Newfield, who did a lot of Westerns with Tim McCoy. He had two speeds for making a film, fast and faster, and usually got them in under a week since he didn’t believe in retakes, no matter what went wrong. It was co-written by George Plympton, 119 ultra-cheap Westerns to his credit, including the pretty clunky Buck Jones/John Wayne effort Range Feud.
The print is rather ropey now and the film jumps a lot over missing frames. The sound isn’t that bad though.
This will do for dyed-in-the-wool Johnny fans but more normal human beings may well decide to give it a miss.
.
PrevPreviousFaillir être flingué
NextNorth West Passage, Book 1 – Rogers’ Rangers (MGM, 1940)Next