Rawhide is a much underrated but absolutely excellent Western.

Given that Tyrone Power had been such a megastar for Fox and was Jesse James in their big color picture of the same name in 1939, it was perhaps surprising that they should have put him in this apparently small, black & white Western in 1951. But it was a high-quality picture in fact and Power was superb in it. He was not really a Western hero. Oh, sure, every big studio star had to climb into the saddle occasionally in those days, even if he were allergic to horses, and Power mounted up six times.
.
. 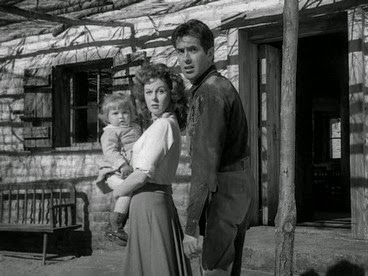 Power and Hayward: excellent combination
.
But apart from Jesse James and Rawhide, two were Canadian Mountie pictures, one was a Brigham Young biopic and in the other he was Zorro; they hardly count as Westerns at all. Jesse James notwithstanding, Rawhide was easily the best he was in. In it he is gritty, tough and ready to fight with fist or six-gun, a real Western lead. And he wears a great shirt. 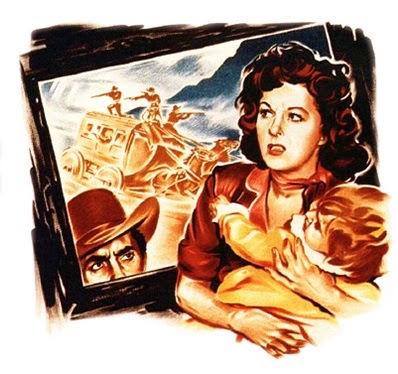 Amusing
.
The picture was directed – very well directed too – by Henry Hathaway. He’d cut his Western teeth on a long series of Zane Grey adaptations for Paramount in the 1930s, many with Randolph Scott, and in 1940 did that Brigham Young film with Power. He later directed Gary Cooper and John Wayne in some of their famous Westerns. So Hathaway knew what he was doing in the West and he does a damn good job with Rawhide, which is pacey, gripping and has excellent performances from the cast.
And the cast is top notch. Apart from Power, aptly named, we have a tough, belligerent Susan Hayward, magnificent in this. She first appears as an unmarried mother, quite shocking for 1951 audiences. The scene where, holding the baby, she demands to be addressed as Miss and not Mrs Holt is very well handled. In fact it turns out the little girl is her late sister’s child and she is going back East to take the infant from the placer camps in California to ‘civilization’. Full marks to Ms Hayward for an outstanding performance. She was one of the Hathaway Garden of Evil alumni (where she also played a tough cookie) and was also memorable in Canyon Passage, The Lusty Men and, in older age, The Revengers, all good Westerns and all the better for having her in them.
.
. 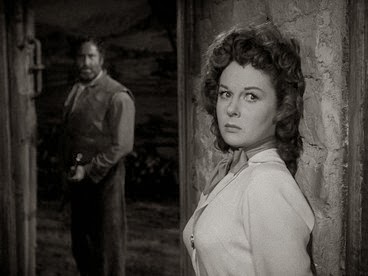 She was terrific in Westerns
.
Then we have Edgar Buchanan as the manager of the stage way-station, as grumpy and crusty as we would expect from the excellent Edgar and one of his best roles. For the scene is set somewhere in the Southwest, between Tucson, AZ and Huntsville, TX, so maybe southern New Mexico, though it is not specified (in any case, beautiful scenery, very well shot in Alabama Hills, Lone Pine locations by Milton R Krasner). Four bandits have broken out of Huntsville and take over the staging post in order to rob the stage of its bullion.
And the bandits are seriously good. They are led by a gripping Hugh Marlowe as Zimmermann. Marlowe was better known for his drama, crime and mystery thrillers but he was in seven Western features (and some TV shows), including with Hayward under Hathaway in Garden of Evil in ’54. Rawhide was his first and what a pity he didn’t do more.
.
. 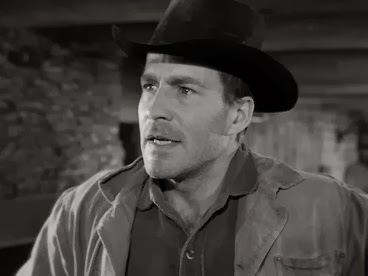 Marlowe: electrifying
.
His three henchmen are played by Jack Elam, Dean Jagger and George Tobias, all terrific. It was one of Elam’s earliest parts and one of his best – even possibly the very best. Right from the get-go he appears as a manic, bloodthirsty villain, just out of two years in the pen, and that squint-eyed, splay-toed, stooping figure is all that we want Jack to be. The sheer evil glee with which he shoots at the baby girl (in a scene that would never be allowed nowadays) is one of the most memorable
moments in Westerns. Jagger is the intellectually challenged Yancy, another classy performance from this great actor, and Tobias is the loyal ox Gratz. It really is one of the best gangs of western badmen ever assembled.
.
. 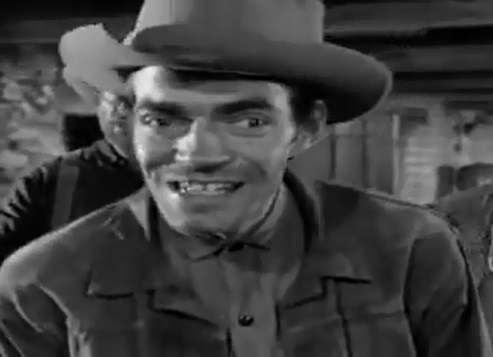 Elam: manic
.
And then other favorite Western character actors make their appearance, such as Jeff Corey as the stage driver, James Millican as the shotgun messenger and Kenneth Tobey as a Ward Bondish cavalry lieutenant. You really couldn’t ask for a better cast.
Another excellent feature of this movie is the music. It starts with a catchy, memorable tune worthy of a big A-picture, dum-de-dum-de-dum, morphs into O Susanna as the stage bowls along and gets terrifically dark when the sinister, threatening badmen are holding the good folk hostage. It’s by Sol Kaplan and it’s one of my fave Western scores. Kaplan’s music for Westerns included The Fiend Who Walked the West (because Fox re-used the score from The Day the Earth Stood Still). Good stuff.
The movie is written by Dudley Nichols, so that explains the quality of the script. It was in fact Nichols’s first Western since Stagecoach. The following year he adapted the AB Guthrie Jr. novel for The Big Sky and in 1957 he did The Tin Star. That’s pedigree.
.
. 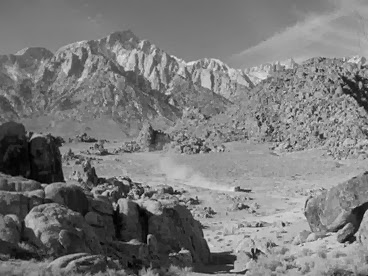 Wonderful locations, fine photography
.
There’s one bit that doesn’t ring true, when bad Guy Marlowe tells Power that he is a green boy now but when he grows it will be different. Marlowe was in fact only three years older than Power.
I love the intro and what they call an outro, as the voiceover (Gary Merrill) tells us about “the jackass mail”, St Louis to San Francisco in 25 days and all for $200 American. In fact I love the whole movie and do not really understand why it is so little thought of. It’s a gripping Western noir that won few plaudits at the time – or since – and yet is one of the best little Westerns the early 50s had to offer. It was apparently a remake of Fox’s 1935 crime melodrama Show Them No Mercy with Rochelle Hudson and Cesar Romero, which I haven’t seen. I doubt it could be as good as this.