There are so many hard-core Maverickistas out there that I hardly need to tell you that Maverick was a TV series that ran on ABC from 1957 to 1962, for a total of five seasons. Season1 starred James Garner as Bret Maverick, gambler, a charming rogue who thought cowardice the better part of valor, though not really. Eight episodes in, his brother Bart arrived, in the shape of Jack Kelly, equally only verging on the reputable, though not, perhaps, with quite the same charisma (though he did have his fans). From that point on, the brothers tended to alternate the leads, occasionally appearing together in the same episode.
. 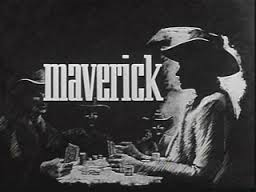 .
After three delightful seasons, which I gobbled up as a boy and still find wonderfully good (and the fact that Budd Boetticher directed several episodes might have had something to do with that), James Garner got into some legal wrangle with the studios and, tragically, disappeared, to be replaced by Beau, played by Englishman Roger Moore, the future James Bond. Actually, another James Bond, Sean Connery, turned the part down first; that was a pity because he was very good, I thought, in Shalako and could have done well on the show. Still, Beau did have his amusing appeal. In Season 4 yet another brother turned up, Brent (Robert Colbert) but he didn’t cut it for me, I’m afraid. The series petered out after the fifth season.
.
. 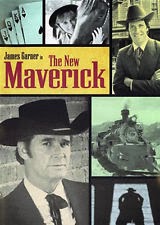 .
Everyone loves James Garner and everyone adored Bret Maverick. Happily, in 1978, a TV movie, The New Maverick, appeared which featured Bret and Bart again and also had Charles Frank playing the part of young nephew Ben Maverick, the son of Beau and a chip off the old slightly dubious yet winsome block. The TV movie was a pilot for the new 1979 series Young Maverick, starring Frank, but this flopped and was rapidly canceled, some filmed episodes not even being shown. Woe. 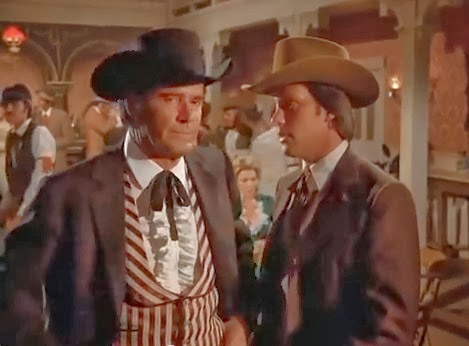 .
Garner had been a dashing and very handsome 29 at the start of the old series but was now 50. So he had added an inch or two to his circumference. Still, the same roguish charm was there. Kelly was a stocky 51 but ditto. In the early 80s, the failure of Young Maverick notwithstanding, Bret would return with another series, Bret Maverick, when he was, obviously, even older and although that show had respectable ratings, it did not survive beyond one season. Of course in 1994 we would get the excellent and very entertaining big-screen movie Maverick in which Garner returned, with a twist.
.
. 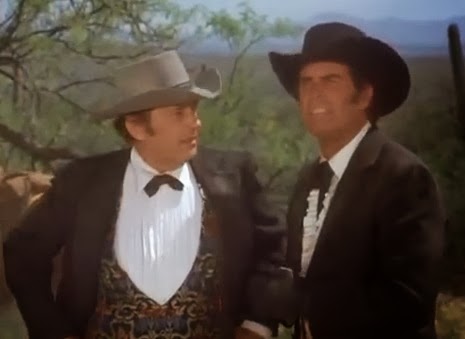 .
So much for a modicum of Maverick lore. You knew it anyway.
As for The New Maverick, it has undoubted charm. It was directed by Hy Averback (producer of F Troop and involved in various comedy Westerns) and written by Juanita Bartlett, who penned a lot of The Rockford Files for Garner. It was nicely shot by Andrew Jackson in those classic Old Tucson locations we know so well. The original music by John Rubinstein is an appropriately chirpy variation on the Maverick theme.
The New Maverick starred Garner. He arrives in East Las Vegas, New Mexico in 1880, where the signboard declares a highly improbable 1880 population for the boomtown on the AT & SF railroad of 127. There he finds that Bart has been killed. Well, of course, any Maverick fan knows perfectly well that he hasn’t been killed at all and he duly turns up later as part of the attempted scam. Bret then runs into Beau’s son Ben, who steals the famous back-up $1000 bill sewn into Bret’s vest, which does not put him in his uncle’s good books. Au contraire.
Well, there follows the expected heist/scam movie as all the Mavericks, along with Poker Alice (Susan Sullivan), among others, try to get in on the act. There’s some action to go along with the banter and a train (Denver & Rio Grande, oddly, and even more oddly, going from Las Vegas to Deming, Texas. I thought Deming was in western New Mexico but there we are). Jim Garner’s brother Jack plays Homer, henchman of the villain, New Yorker Vinnie (a not terribly good George Loros, who had appeared in quite a few Rockfords).
.
. 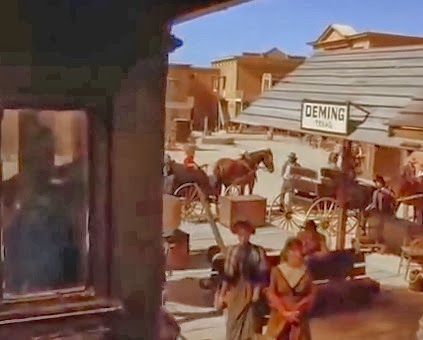 .
Bret has what looks like an odd derringer. I wonder what it was.
.
. 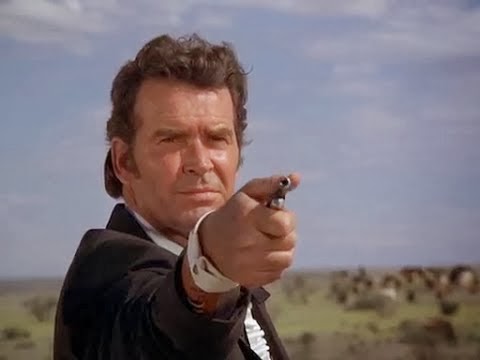 .
A must for Maverick addicts, this is watchable by normal human beings too, though not as good as the 1994 movie. Actually, none of the later incarnations came near the quality of Seasons 1 – 3 of the original.
.
PrevPreviousThe Trackers (ABC TV, 1971)
NextReturn of the Bad Men (RKO, 1948)Next