A Western worth seeing
.

While Fort Massacre is a Joel McCrea Western, and ipso facto worth seeing, it is an intense drama involving relatively few men (and no women really, despite Susan Cabot being second-billed) and it rather reminds me of a 1960s or even 1970s Western, being tough, cynical and unromantic.
.
.

A late McCrea, worth seeing
.
McCrea plays a grimmer than usual role, a sergeant, unshaven, filled with hatred of the Apaches who have been responsible for the death of his wife and children. The sergeant finds himself the ranking officer after an attack and in command. He is racked by doubt as to his worthiness and ability to bring the men to safety but does the very best he can despite an unruly, insubordinate and whining crew.

McCrea had been a sergeant the year before, in Trooper Hook, but there he was much ‘softer’.

Earlier that year McCrea had done Cattle Empire, in which he was a tougher than usual lead, we think at first almost a bad guy (though not quite, of course). In Fort Massacre he took that persona a step further.

Tougher still
.
Most of the many Fort pictures involved one of those wooden toy forts made of spiky logs, which is duly attacked by Indians. This one gives a new twist on that: the beleaguered soldiers hole up in ancient New Mexican cliff dwellings and turn them into a fortress.
The picture was competently if routinely directed by Joseph M Newman who had done North West Rangers in 1942, the Tyrone Power Canadian Mountie picture Pony Soldier in 1952, the Robertson/Baxter version of The Outcasts of Poker Flat the same year, and then this one. Later, in his best Western effort, he directed McCrea again in The Gunfight at Dodge City, then the rather weak A Thunder of Drums in 1961 (no thunder and no drums either) and a couple of TV episodes of The Big Valley. It’s not really a stellar Western CV but you know, it ain’t bad either.
.
.
Fort Massacre was another Walter Mirisch production. McCrea and Mirisch did six Westerns together. It was in fact the first film of Walter’s new company The Mirisch Corporation, and he switched from Allied Artists to the more powerful United Artists.
It was written by Martin Goldsmith who later worked on Gunfight at Dodge City but was no specialist really. There are some good lines, though, such as Joel telling John Russell, “More men find themselves in the wilderness than get lost in it.”
Visually the picture is appealing with its New Mexico locations around Gallup and the Red Rock State Park, with some Kanab, UT thrown in. It was photographed by Carl E Guthrie who had shot some 20-minute Western shorts for Warners in the 1940s then a few feature-length Westerns. He did The Oklahoman with McCrea in ‘57 and followed up Fort Massacre with Fort Bowie. He also photographed a lot of the Cheyenne TV series, so he liked his Westerns. His best work, I think, was Yellowstone Kelly in 1959. Fort Massacre is shot in CinemaScope and Guthrie and Newman made the most of the wide screen.
.
.

Making the most of CinemaScope
.
As for the acting, discounting the Indians, who rarely appear as real people in these pictures but only as a generic threat, and discounting a couple of brief bit parts (an old trader man and his wife played by Irving Bacon and Claire Carleton, and then at the end an old Piute Indian and his granddaughter – Francis MacDonald and Susan Cabot) the only personages are the recalcitrant troopers.
Forrest Tucker leads these with a brave/foolish attempt at a Dublin accent, and among the others there is an excellent John Russell, good old Denver Pyle (who had a difficult part as he was gravely wounded for most of the picture) and the best of them, the Pawnee scout, Pawnee, played by the splendid Anthony Caruso.
.
.

The troopers. That’s Russell, center right, and Caruso, far right
.
I’ve lost count of all the Westerns Forrest was in, almost always as a heavy. He was just great. Sergeant O’Rourke in F Troop on TV, he started pretty high up by landing a supporting part in The Westerner in 1940. After that he was in Westerns galore (a lot of those Randolph Scott ones, for example) and then loads of TV shows. A Western-lover will see him pop up again and again, and will always say, ‘Oh good, it’s Forrest Tucker.’
John Russell was of course Marshal Dan Troop in Lawman on TV but he was also in a lot of movies. His first oater was as Lengthy in the excellent Gregory Peck noir Western Yellow Sky in 1948, and at the very end of his career, in 1985, he was perfectly splendid as Marshal Stockburn in Pale Rider. You’ll probably also remember him as Nathan Burdette in Rio Bravo. A fine Western actor. Here he is the most sensitive and intelligent of the troopers, named Travis, so he must have been standing in for Ben Johnson.

Tough stuff
.
Anthony Caruso was one of those characters usually defined as ‘colorful’. He has the honor of having played 14 different characters in Gunsmoke, which has to be a record! His looks often got him parts as Indian, Mexican or generic foreigner. He was usually a heavy. Caruso (great name!) was in huge numbers of film and TV Westerns from 1940 to 1989 and is always worth watching when he comes on.
As for Denver, it’s time I did a Denverama, a retrospective of his Western career as I have for various other character actors. I’ll get to work on that. But he was in so many oaters it’ll be a long job…
La Cabot in her tiny part has a line where she says she is only 17. That’s a bit rich from an actress of 31 but it doesn’t really matter because blink and you’ll miss her. I supposed they billed her after Joel because it was traditional to have a female lead billed second (or even top) but she is only a token presence in this story.
.
. 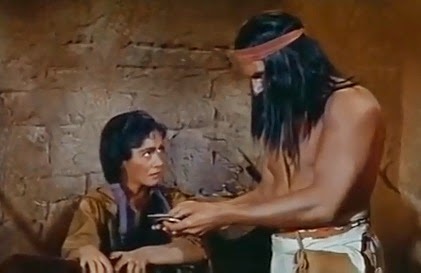 Token part
.
There are a couple of annoying bits such as where Forrest Tucker wants a drink from his canteen, finds it is empty and throws it down. Why do they always do that? Worse, an Indian exhausts the ammunition in his Winchester and chucks it away. A good director would not have allowed that kind of solecism.
.
.
It has a very downbeat ending and the whole picture has a grim tone. Perhaps that contributed to its lack of box-offic success.
But all in all it’s a Western very worth seeing, dark, somber and tough.