.
.
Frontier farce
.
.
Bob Hope was a huge star in 1948. Aged 45, he had already starred in 52 films, including three Road to movies. It was inevitable that he would do a comedy Western and The Paleface was the first of four, all funny.
Casting Jane Russell as Calamity Jane was an amusing stunt. She too was very famous and had just emerged from a seven-year contract with Howard Hughes which had led to the perfectly ghastly film The Outlaw, the worst Billy the Kid movie ever, in which she was frankly dreadful. Hope introduced her as “the two and only Jane Russell” and he said, “Culture is the ability to describe Jane Russell without moving your hands.”
.
. 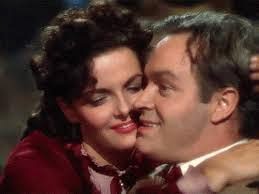 .
Paramount threw budget at The Paleface. Color films were not that common in ’48. Ray Rennahan was engaged as cinematographer and Victor Young did the music. Jay Livingston’s song Buttons and Bows won an Oscar.
.
.
They had Norman Z McLeod direct it. he was one of the leading comedy directors. He’d done Monkey Business and The Secret Life of Walter Mitty. The Paleface was the fourth of five Westerns he did; the last one was Bob Hope in Alias Jesse James.
.
. 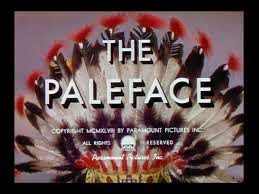 .
The Paleface has a preposterous plot, of course, but that was half the point. Calamity Jane is broken out of jail by henchmen of the Governor and sent as a secret agent on a mission to foil a plot by renegade white men to sell guns and dynamite to the Indians. Selling guns to Indians in Westerns was a crime situated somewhere on the scale of awfulness between cannibalism and matricide. But in fact the first reel is really quite serious and could be many a 1940s non-comic Western. But then the by-the-book dentist Painless Potter (Hope) appears…
Central casting was also clever to get hold of Adolf Hitler as principal badman and owner of the saloon. A very good likeness anyway. He’s even a bad painter too. The Adolf lookalike is Bobby Watson. Clem Bevans, who was comic old-timer in a heap of B-Westerns, is in it too. Among the bit parts you can spot Harry Harvey JP, Richard Farnsworth, and Nestor Paiva as Patient #2. But the majority of the non-Hope/Russell casting is a bit ho-hum.
.
. 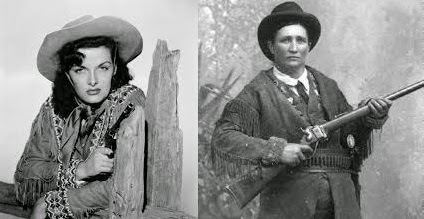 Calamity Jane
.
The writing is amusing but not exactly memorably hilarious. There’s the occasional droll Bob one-liner, “Brave men run in my family,” that kind of thing, but all in all I wouldn’t put this film in the greatest-of-all-comedy-Westerns class. In 1952 Hope and Russell made a sequel, Son of Paleface, and, unusually, that second one was funnier.
But don’t get me wrong, The Paleface is still very entertaining indeed.