.
Hi yo, Silver!
.
.
As everyone in the universe knows, the Lone Ranger first appeared in 1933, broadcast on WEBR in Buffalo, then on a Detroit radio station, WXYZ. The show was written by Fran Striker, who also wrote Sgt. Preston of the Yukon and The Green Hornet (and by the way, did you know the Lone Ranger and the Green Hornet were related? Well, they were). Buffalo actor John L Barrett was the first masked man, a few weeks before George Stenius (who later changed his name to George Seaton) took over. Striker went on to script various Lone Ranger novels, two movie serials, and The Lone Ranger comic strip. We owe him much.
.
. 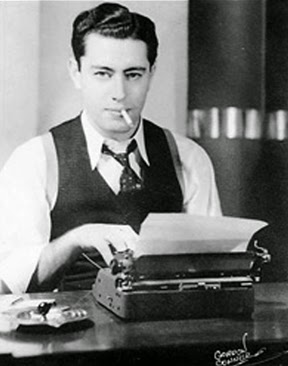 Cig, loose tie, typewriter. that’s what I call a writer. Thanks, Fran.
.
Much earnest and scholarly historical research has revealed that the character was originally believed to be inspired by Texas Ranger Captain John Hughes, one of the ‘four great captains’, to whom the book The Lone Star Ranger by Zane Grey was dedicated in 1915.
In 1949 the masked man moved to TV. Perhaps, on radio, he hadn’t even been wearing a mask. A frightening thought. Eight small-screen seasons followed, for a total of 221 episodes, and it was a big hit for ABC. The masked man, as everyone knows, was Clayton Moore. He had had small-to-middling parts in Westerns since 1937 and had starred in the Republic serials Jesse James Rides Again and Adventures of Frank and Jesse James in 1947 and 1948. Clayton’s tenure as the Lone Ranger was interrupted. There were legal wrangles – the whole Lone Ranger franchise has been beset by lawsuits – and he was replaced in Season 3 by John Hart (who played the crusading newspaper editor in the 1981 movie). Clayton rode again, though, from Season 4 on.
.
. 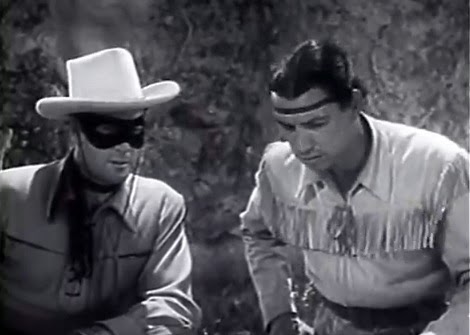 Clayton and Jay. My heroes.
.
Tonto was the great Jay Silverheels. The character Tonto hadn’t even appeared until the eleventh episode of the radio serial but thereafter was essential to the whole show. The Lone Ranger had to have someone to talk to. On the radio Tonto was a member of the Potowahomi tribe but he has been from various tribes since. The choice of his name was unfortunate, to say the least (and he is Toro or Ponto in Spanish-speaking markets). Clayton always called him Tonno of course but I think that was just his pronunciation. Silverheels (Harold J Smith) was a Canadian Mohawk who started in movies as an extra and stuntman in the late 1930s. He got a small part in the 1940 Kit Carson and was in sixteen Westerns before The Lone Ranger.  He would play Geronimo several times and though the parts he got were nearly always one-dimensional and he played many stereotypical Indians, he was always good.
The Lone Ranger and Tonto made it to the big screen as well as the small one. There have been six movies (not counting the 1949 TV pilot, Enter The Lone Ranger): The Lone Ranger in 1956, The Lone Ranger and the Lost City of Gold in 1958, The Return of the Lone Ranger in 1961, The Legend of the Lone Ranger in 1981, a TNT The Lone Ranger in 2003 and Disney’s The Lone Ranger in 2013. That’s quite a lot of masked men.

The 68-minute black & white TV pilot film was excellent. You see, it gives the backstory.
.
. 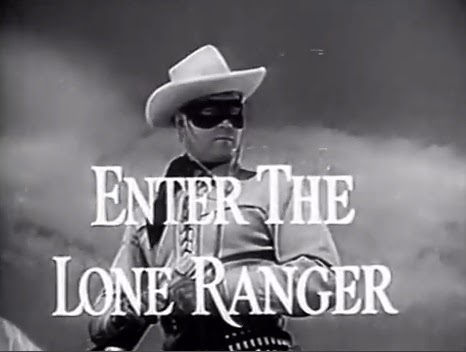 A must-see
.
In this gripping thriller, wicked Butch Cavendish and his gang set a trap for the Texas Rangers and brutally slaughter them, in a very 1930s pulp gunfight. Only one, who is, the dramatic voiceover informs us, the brother of Ranger Captain Reid, though badly wounded, survives. But we don’t see his face…
You can tell Butch is wicked because he has a pencil mustache and he shoots someone in the back. But this Cavendish is a smiling kind of villain. Who shall play this wicked man? Why, who else but Glenn Strange! Excellent. He’d been Butch on the TV show. 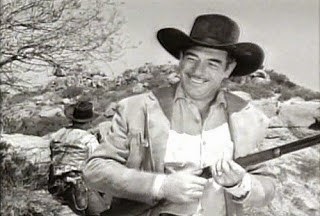 One of the greatest badmen ever: Glenn Strange as Butch
.
Now (you probably know this) when much younger, this survivor Reid nursed an Indian, Tonto, back to health and this same Tonto happens along now. He returns the compliment and cures Reid of his terrible wounds. The Ranger fashions a mask out of his dead brother’s vest (a bit creepy?) because he does not want it to be known that he escaped the massacre. He wants to ride the West and right wrongs. Anonymously. “I’m not going to do any killing,” he reassures Tonto. “I’ll shoot if I have to but I’ll shoot to wound.”
The Lone Ranger is already giving Tonto the menial tasks and Tonto is already meekly answering, “Me do.” Sigh. The LR hasn’t got his fancy gunbelt with two silver pistols yet, though, just an ordinary single gun.
They find a beautiful white horse about to be gored by a buffalo. Reid shoots the buff with his pistol and saves the nag. Oddly, the beast appears to be shod. Oh, well. Once he has tamed the wild stallion (Silver, of course), the Lone Ranger and Tonto on his paint, Scout, ride off to defeat Butch and right a few more wrongs.
.
. 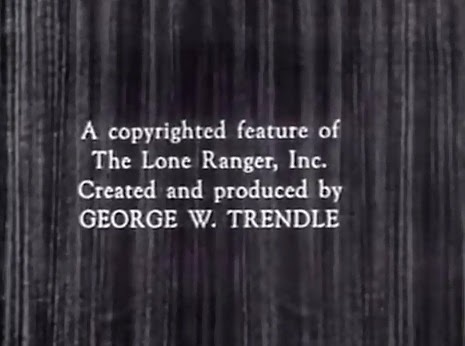 Trendle was the owner of the Chicago radio station and claimed to have invented The Lone Ranger. Fran Striker apparently had nothing to do with it.
.
It seems everybody important in Colby plumb got shot, an old timer friend tells the Ranger. Butch is behind it, of course. Tonto, Kemo Sabe and the old-timer go to a secret silver mine the Lone Ranger happens to own and this way he can finance his crusade and have unlimited silver bullets.
Well, the Lone Ranger and Tonto deal with the gang alright but Butch escapes. Butch’s mount is no match for Silver, though, and at the speed of light the masked man on his white horse catches up with the villain. Butch is obliged to throw down his .45. But you know how sneaky he was and sure enough, he gets out a pocket derringer! It does him no good, though, not with the masked man’s silver bullets in the offing. So the evil gang is rounded up. “You take off mask now,” says Tonto. “No. Our job is just begun, Tonto. We have a lot of trails to follow.”
.
. 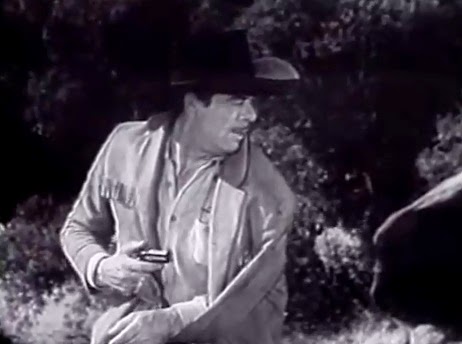 Boy, was he sneaky
.
Indeed they did. With 221 TV episodes and six movies to do, not to mention the comic books and all those personal appearances at fêtes by Clayton Moore in his mask, the trail had indeed only just begun.
To be brutally honest, the acting is desperately wooden and the script ponderous to a degree. But, well, it is The Lone Ranger. You can’t knock it. All serious Lone Rangerists, and normal human beings too, need to see this picture. 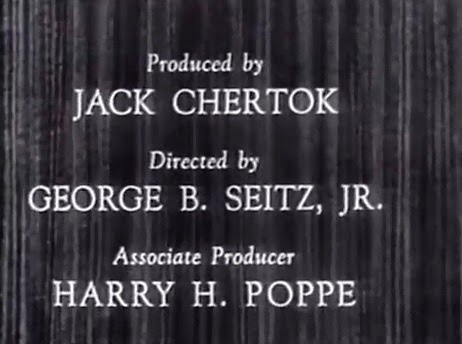 Seitz directed the pilot, 32 episodes of The Lone Ranger and two of the movies