Get the anti-nausea medication ready
.

Of all the many services that Jeff Arnold’s West provides, for only $99.99 a month (or free if you like Westerns), one of the most useful is the reviews of Westerns so appallingly awful that they are unwatchable. This means that you don’t have to sit through them yourself. Jeff takes on that onerous duty on your behalf and you remain mentally unscarred by such excrescences as Ramsbottom Rides Again. As an example of this, 34 spaghetti westerns have already been reviewed on this blog, meaning that you never have to see them.

Of course, there is also the risk that you won’t even read about them. You might skip this post entirely, or even cancel your $99.99 a month subscription. But that’s a risk Jeff is prepared to take. For he considers it his moral duty to sit through ineffable junk so that you, dear e-reader, should not have to.
In any case, don’t worry, for the review will be short.
.
. 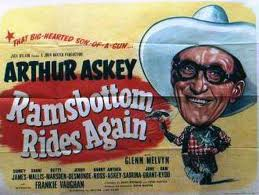 Probably hilarious in 1950s Britain
.
Arthur Askey was a comic who was very popular in austerity post-World War II Great Britain, especially in the North. His short stature, owlish eyeglasses, slapstick antics and catchphrase “I thank you” were considered hilarious. But like the finest wines, national senses of humor do not always travel well. In fact a citizen of any other country will look at Mr Askey and wonder what on earth is supposed to be funny about him.
.
. 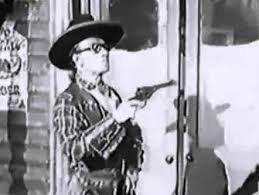 Yes, well…
.
Of course the British, like many nations, loved cowboy films (and many Brits, I am happy to say, still do) so it was natural, I suppose, that they would make “comedy” Westerns. They actually also made some proper ones and indeed, one or two of them were really not bad. 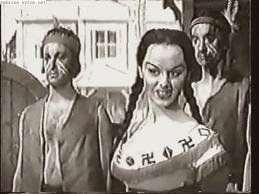 Sabrina. She’s supposed to be alluring.
.
But some were.
.
.
This 1956 effort concerns the owner of a Yorkshire public house who learns that he has inherited a mining claim and saloon in Lonesome, Canada and decides to live there. Unfortunately, the first half hour of the movie is taken up with the pub and his family’s voyage by sea to the Dominion. When they arrive, they meet a lot of British actors trying Canadian or American lingo, with limited success (I think they were honors graduates of the Dick van Dyke School of Foreign Accents) and the badman bandit leader they have to combat is played by another popular British comic, Sid James. Mr James, who would be on the stagecoach in The Sheriff of Fractured Jaw in 1958 and would star as The Rumpo Kid in another brit ‘comedy’ Western, Carry On Cowboy in 1966, seems to have enjoyed putting on Stetson and gunbelt. He acts with, er, gusto.
One of the unbelievably bad actors is the person billed as “Britain’s Jayne Mansfield”, Sabrina. She plays an Indian maid, ‘Girl’, and is… well, words fail me. Another of the unbelievably bad actors is the sub-sub-Sinatra British 1950s crooner Frankie Vaughan, and his part is morbidly watchable if you have any cyclizine or promethazine handy.
.
. 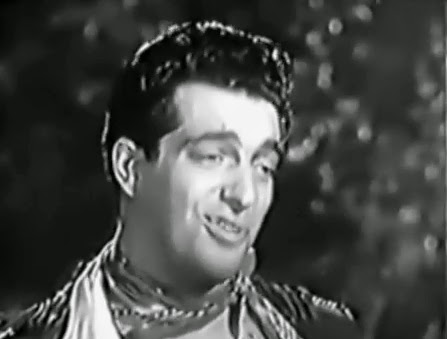 Frankie Vaughan. Morbidly watchable.
.
In fact I advise liberal dosage of those anti-nausea medicaments if you do, rashly, attempt to see this film.
.
PrevPreviousFlaming Feather (Paramount, 1952)
NextArrow in the Dust (AA, 1954)Next

PrevPreviousFlaming Feather (Paramount, 1952)
NextArrow in the Dust (AA, 1954)Next
Jeff Arnold © 2022 – All rights reserved – Designed by BetterCallChris
Scroll Up