.
Quirky and visually fine Western
.
.
Dalton Trumbo (1905 – 1976), possessor of the best name in world history (Dalton Trumbo) was a screenwriter and novelist, most famous for being one of the Hollywood Ten who refused to testify to HUAC. His subsequent blacklisting was a great blow to his career but it didn’t stop him. He won two Academy awards (for Exodus and Spartacus) under pseudonyms.
.
. 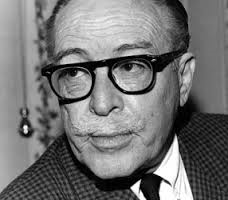 Trumbo
.
From a Western point of view he worked (uncredited) on Fox’s 1957 Lex Barker Mohicans picture Deerslayer, the 1958 Glenn Ford/Jack Lemmon picture Cowboy, the Robert Aldrich-directed Kirk Douglas/Rock Hudson picture the Last Sunset, and his last Western was the stupendously good Lonely Are the Brave, which Douglas again, an admirer, got him for. Now, having the best name ever doesn’t necessarily mean you are the best screenwriter ever, because one or two of the above were so-so. But right in the middle of the five pictures was the curious black & white Western with the lurid title Terror in
a Texas Town.

The title might suggest a similarity to The Fiend Who Walked the West or it might hint at some supernatural or even outer-space creature haunting the place. But nay.

Trumbo (with Ben Perry fronting for him) did not score high in this one on originality of dialogue, or, sadly, in characterization, but he did have an unusual plot. We open with the situation where crooked town boss Ed McNeil (Sebastian Cabot), with the aid of his henchmen and a tame sheriff (Tyler McVey), is forcing farmers off their land because they haven’t got proper registered claims. This story already had whiskers on it when the Triassic Age gave way to the Jurassic. But Trumbo has a Swedish seaman come back to visit his daddy on the farm, only to find that his daddy has been murdered by Johnny Crale, a two-gun hitman in black (Nedrick Young) paid by the evil McNeil.
The Swede is Sterling Hayden, who hated these “wretched” Westerns but did them for the money. Hayden was actually a seaman, with a master’s license, and therefore brought some realism to the part, though he was not from quite as far north as Sweden: New Jersey. Still, he makes a brave stab at the Swedish accent with its rising intonation. The seaman is in a town suit and derby, with what I thought at first was a casket on his shoulder but it turned out to be his sea-chest.
.
. 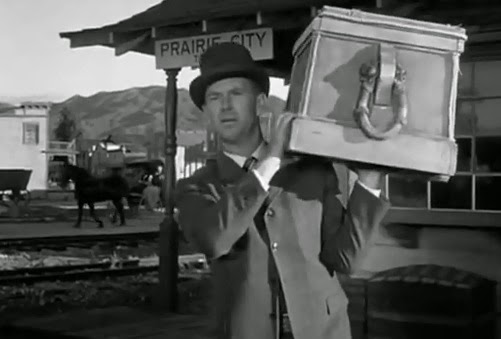 Swede with seachest
.
He stays in this garb; in most Westerns he would have changed into range duds on arrival. But his concession to the West is to remove his coat and collar. He never straps on a gun. He uses a whaling harpoon. Yup, that’s right. We get a main-street showdown between gunslinger in black with Colts and a Swede with a harpoon. You have to admit, that is unusual.
.
. 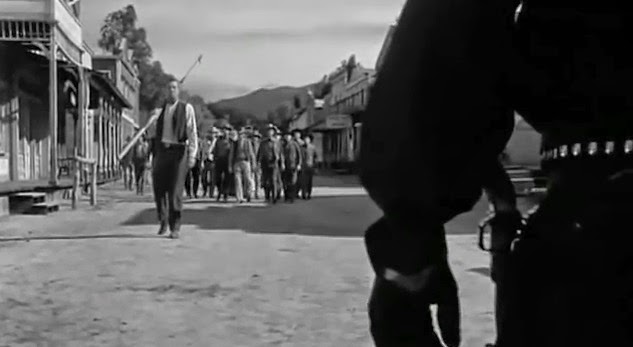 The oddest Main Street showdown
.
There’s a girl, of course, Molly (Carol Kelly, three big-screen oaters and a few TV shows). She is gunman Johnny Crale’s schmooze but she falls more and more out of love with him, the more innocent farmers he murders. I guess one might. 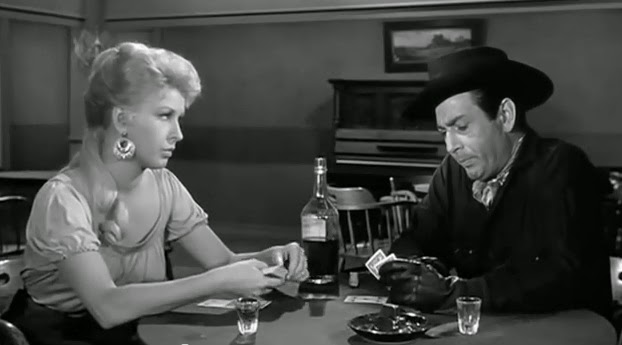 Falling out of love
.
One good thing, Frank Ferguson is the leading townsman and you know how I much of a FF fan I am. He’s like a walking, talking walrus.
.
.
. 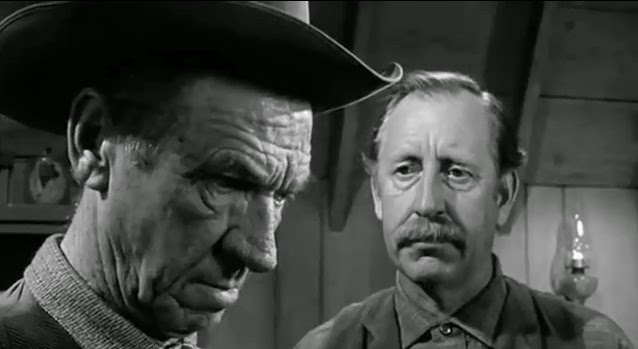 Glenn Strange (disgracefully uncredited) is on the train, so that’s good too. I always like to see Glenn. 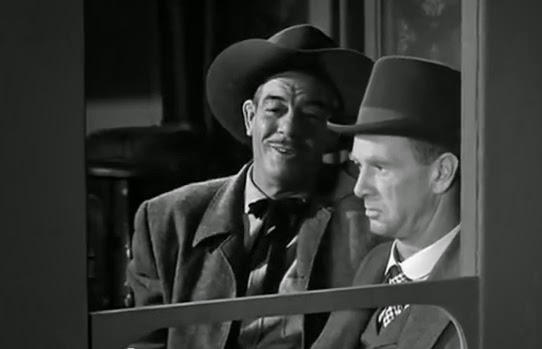 Glenn Strange the Great a passenger on the train
.
As far as avoidupois went Sebastian Cabot avait du pois. He was fat in a lot of TV western shows but only three movies. He’s appropriately scheming and greedy.
.
.
. 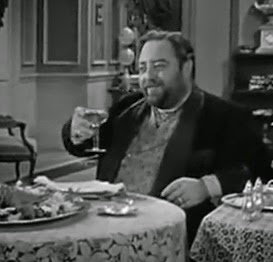 I could have sworn one of his henchpersons was Brian Donlevy but it wasn’t; it was Fred Kohler Jr, playing a character with the unflattering name of Weed. Kohler was in numerous B and TV Westerns from 1931 to 1967, especially Cisco Kid episodes.

Well, I liked it anyway. The script has a left-wing tinge to it as the brave working class homesteaders unite to fight the exploitative capitalist. And win. There’s also a sympathetic Mexican-American farmer (Victor Millan) who suffers at the hands of the greedy land-grabber and the picture has a good civil rights agenda for 1958. Hayden never forgave himself for not buttoning his lip before the HUAC and so probably felt he was expiating a bit on the set of Terror with Dalton.
.
. 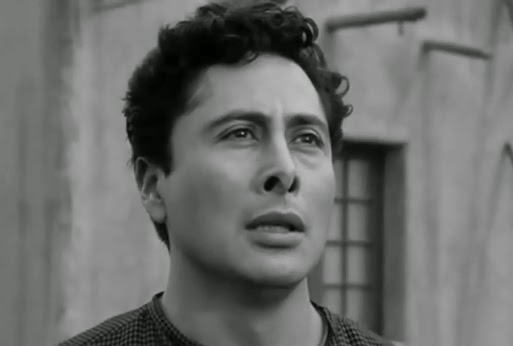 Standing up for workers’ and immigrants’ rights
.
It was actually shot (in black & white) by Ray Rennahan and is therefore visually very classy despite the minimal budget. There are some good angles, for example a dollying pan, I think it’s called, in which the camera moves from inside to the street discovering the advancing gunfighter. There’s a fine close-up of an old farmer’s face bathed in the flickering light of his burning barn as he sees his livelihood go up in flames.
.
.
. 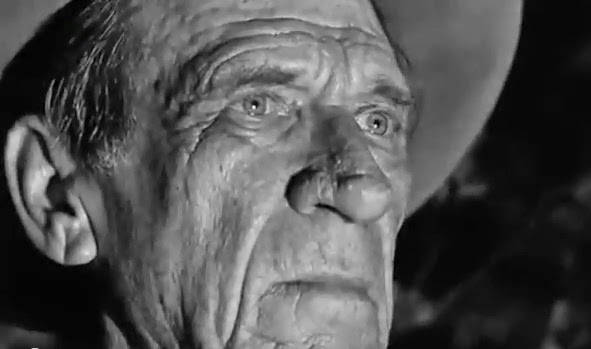 I liked the opening shots and the ones under the titles, which are highlights of the movie to come. Rennahan shot a lot past foreground objects, as if we, the watchers, were there, almost spying, or like townsfolk, afraid, watching, but our view was sometimes obstructed. 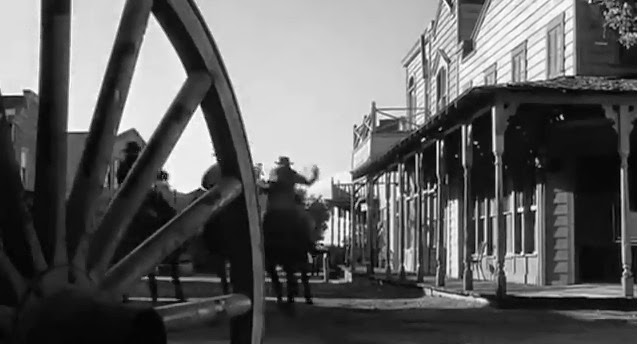 Gunmen gallop by but our view is obscured

It was directed by Joseph L Lewis, his last movie before he devoted himself exclusively to TV. Lewis has his admirers and he managed to turn out ultra-low-budget pictures with a certain flair. Martin Scorsese has called one of his films (the noir Gun Crazy) “a tone poem of camera movement” but that seems arty talk to me, I’m afraid. There definitely is some noticeably good photography in the film but that doesn’t make it a tone poem. Lewis’s first Western work was as editor of the Tom Mix serial The Miracle Rider  in 1935, so respect. 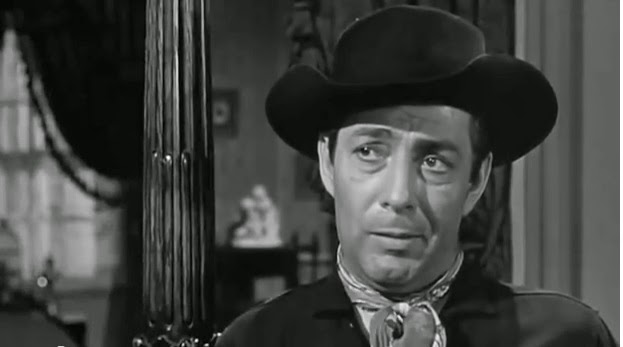 Trying to be Bogart
.
The picture has gained a little cult status and is certainly worth a watch for Hayden, Ferguson, a glimpse of Strange and to see the harpoon. Although in the last resort it’s a rather ordinary low-budget oater, it’s still a quirly little film well worth a watch. 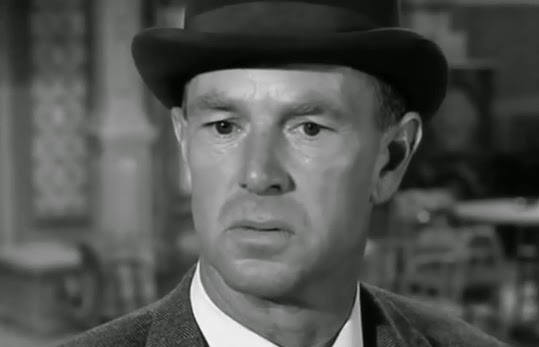