.
A Western that bears little resemblance to Bret Harte (or the Western)
.

This film is in some ways not a “spaghetti western”. It was made quite late (1975) when the genre was really over, and it had certain pretensions to being better than those pulp exploitative movies that were churned out in great numbers and very cheaply in the late 1960s and very early 1970s.
It was directed by goremeister Lucio Fulci (1927 – 96), who did all those Italian horror and zombie movies. He was involved in seven Westerns (or westerns anyway) altogether, from 1966 to 1978, starting with his direction of Massacre Time (which went by the snappy original title of Le colt cantarono la morte e fu… tempo di massacro) with Franco Nero and George Hilton, and ending with Sella d’Argento, which went by the English title not of Silver Saddle, as one might imagine, but the rather cheeky They Died With their Boots On (no relation to the good one), with some minor Italian ‘stars’. Fulci’s biggest hit was a 1973 version of White Fang, to which he made an even weaker sequel, Challenge to White Fang, in 1974.
.
. 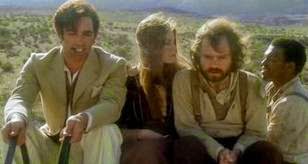 The 4
.
Unfortunately, however the direction of Four of the Apocalypse is one of its major weaknesses. It is far too leisurely of pace and needed sharper handling and, failing that, better editing. At 104 minutes (the uncut version on my DVD anyway) it is too long and too slow. Maybe the cut theater version was better.
It is based on The Luck of Roaring Camp and The Outcasts of Poker Flat, two Bret Harte stories (though the titles don’t trouble to spell Harte’s name correctly) but when I say “based on”, I mean that only in the loosest sense. Mind you, that was true of all movie versions of such stories – see, for example, any film version of Poker Flat (there were several) or Tennessee’s Partner. Their contents bear very little relation to the source stories, and not a single one managed the amused and ironic detachment of the Harte narrative. The written stories are anyway so brief and only hint at the past lives of characters, so they encourage liberal interpretations. Watching Apocalypse, I sense a conflict, never resolved, between writer Ennio De Concini, who was trying to produce a serious story with even some romance in it, in Harte style, and director Fulci who just wanted sensational gore and spaghetti shoot-em-ups galore.
.
. 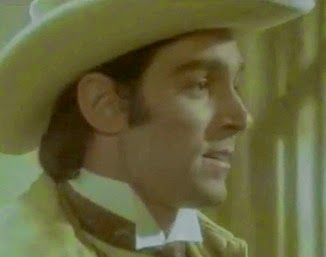 Fabio Testi as slick gambler Stubby
.
The movie opens with an ultra-violent version of the opening pages of Poker Flat, with a town that decides to expel its less salubrious elements and organizes a group of hooded vigilantes who bloodily shoot down or brutally hang any number of drinkers, gamblers, whores and black people (the latter because they are black). The four are: gambler-dandy Stubby Preston (Fabio Testi in the Oakhurst role); rather well-dressed and clean-looking pregnant whore Bunny (Lynne Frederick) in a combination of the Duchess and Cherokee Sal parts; Michael J Pollard as Clem, a younger and less evil version of Uncle Billy, the drunk; and, playing no part written by Harte, mentally disordered Butt (Harry Baird). They are all taken from jail and are about to be hanged but the delinquent and corrupt sheriff (Donald O’Brien) takes Stubby’s thousand-dollar bribe and the four leave town in a wagon for Sand City, two hundred miles distant.
.
. 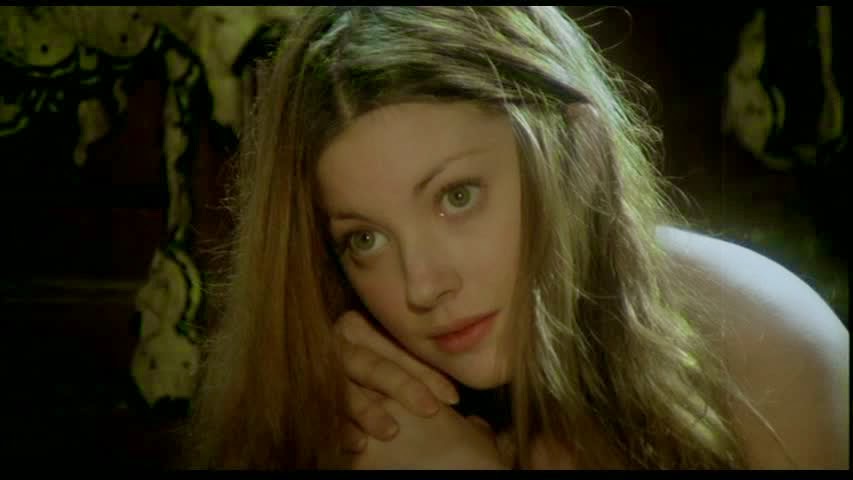 70s-pretty Frederick, often in (then) fashionable soft focus
.
To compare this motley quartet with the four riders of the apocalypse is clearly silly and undermines not just the title but the whole meaning of the film.Once they are expelled, the Poker Flat story is abandoned and they are not snowed in. Instead they progress (very slowly) towards Sand City.
They are met by a sinister, bloodthirsty bandit, the Charles Mansonish Chaco (Tomas Milian) who, in a series of really unpleasant scenes, flays a captured lawman, shoots Pollard, ties up Testi and Baird and rapes Frederick, then goes off in the wagon, leaving the foursome to stagger on foot towards their goal, Stubby and Butt carrying Clem on a stretcher.
.
. 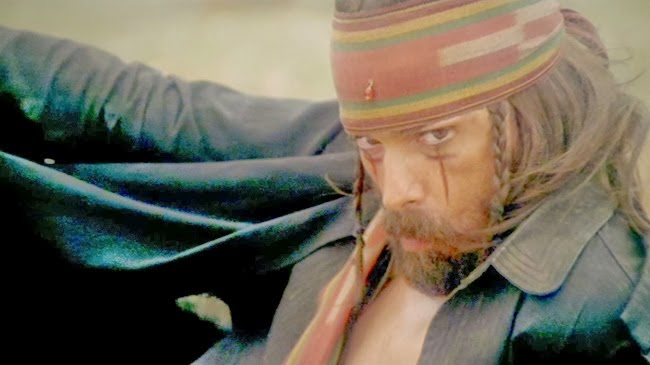 Mansonish Milian
.
There’s a 1970s (more 60s, actually) American-style folk-rock song, Movin’ On, which plays on a repeat loop as the soundtrack while the characters endlessly plod on. This is a kind of Western road movie – what you might call a trail movie – and the trouble with trail movies of this type is pace: the film moves at walking (or shuffling) speed, or hardly at all. They get soaked in a rainstorm. They come to a ghost town where, being soaked, they now have an excuse to take their clothes off. Baird goes crazy communing with the dead souls in the cemetery, Pollard dies and they eat his left buttock. Stubby and Bunny abandon Baird, set off again, meet a preacher (Adolfo Lastretti) and finally arrive at a men-only mining camp, Altaville, which is the film’s version of Roaring Camp and now that story takes over. Bunny gives birth to a baby boy before expiring, and the rough miners adopt the infant.
.
. 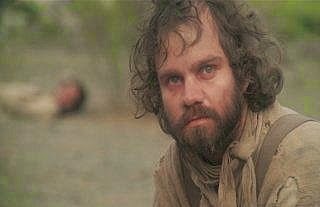 Drunk Pollard
.
There are other non-Harte plot developments it would be too boring to recount, about a wagon train whose people are slaughtered by Milian and how Testi gets revenge. It all goes on far too long.
Like all these Italian westerns, it is post-dubbed. It is very hard for even able actors speaking good lines (which these are not) to overcome this handicap and it always sounds false and staged. Weaker actors (such as Ms Frederick) are doomed. There are also those dumb gunshots spaghettis always have, where every bullet ricochets with a whine even if it doesn’t hit anything.
.
. 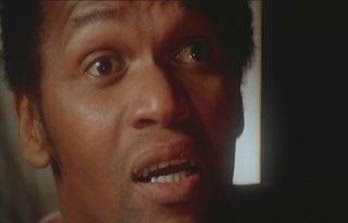 Crazy man Baird
.
It was filmed, according to the end-credits “on location” (one of the stupidest film expressions of all, meaning in a place) and at Cinecittà. The locations were actually a set they built in Austria (heaven knows why), and the inevitable Almeria, which looks as much like the purported Utah as Mongolia does.Testi did the stunts as well as his part. He had worked as as stuntman for years trying to pay his way through college (which in Italy can easily be a decade-long experience).
Filming wasn’t easy because Fulci was rather a tyrant and Pollard had to depart the set for a drug rehab clinic. The picture didn’t do that well at the box-office in an era when spaghetti westerns were really done and dusted. So it was both a commercial and critical dud.
All in all, e-pards, I wouldn’t bother, even if (especially if) you like Bret Harte.
.