The Cisco Kid wins an Oscar
.

There have been many Cisco Kids. When you hear the name you might immediately think of Gilbert Roland, or Duncan Renaldo, or perhaps (depending on your age) Cesar Romero. The first celluloid Cisco was William R Dunn, in a 1914 short, a silent movie with the same title as the original O Henry short story, The Caballero’s Way. Warner Baxter was the second, in 1929. 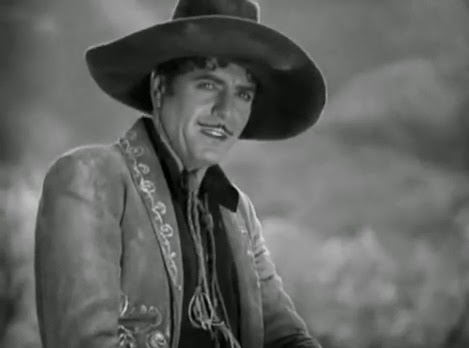 Warner Baxter wins Raoul’s Oscar
.
It was to have been Raoul Walsh. He had quuite a career as an actor, working with DW Griffith (he was John Wilkes Booth in The Birth of a Nation, for example) and he should have both starred in and directed Fox’s movie In Old Arizona. But a jackrabbit through the windshield put paid to that (and an eye) and so Irving Cummings took over the direction and Warner Baxter played Cisco. Raoul might have cursed later, when the film was Oscar-nominated for best picture, best direction, best writing, best cinematography and best male lead. Baxter won. Or perhaps generous Mr Walsh was pleased.
.
. 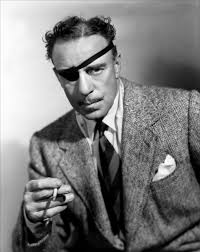 The eye-patch looked dashing, though
.
Seen today, it seems amazing that the film should have been up for these awards. The picture is slow to the point of ponderousness. The actors speak slowly. There are long speeches as the very limited action of the story unfolds at what would today be regarded an intolerably leaden pace. The runtime is 95 minutes, no less, and when you are watching, it seems it.
Still, having said that, it definitely has its plus points. It was the first full sound Western (much is made of ticking clocks, clip-clopping hooves, and so on) and the first talkie to be entirely filmed on location (California and Utah standing in for old Arizona) and not on a studio lot. And it must be admitted that Baxter did have a roguish charm. The film follows the story very closely (unlike later Romero/Renaldo/Roland efforts). Cisco is a pretty bad man. They did tone Henry’s character down a bit. He doesn’t kill people for the fun of it, as in the book. But he does engineer the shooting to death of his faithless girlfriend, which some chaps might consider not entirely gentlemanly behavior.
.
. 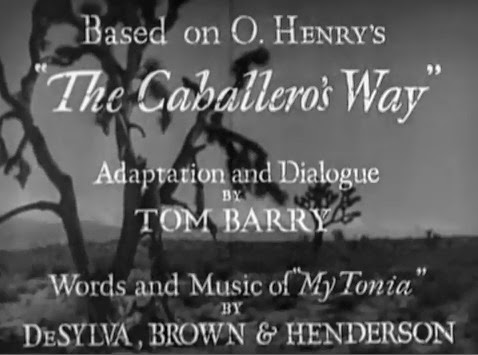 Actually quite close to the O Henry story
.
The 4600-word story had been just one (the eleventh of nineteen) in Heart of the West, a collection of short stories by William Sydney Porter (1862 – 1910) whose nom de plume was O Henry. It is in the public domain and available to read free here if you wish.
The opening words are:
The Cisco Kid had killed six men in more or less fair scrimmages, had murdered twice as many (mostly Mexicans), and had winged a larger number whom he modestly forbore to count. Therefore a woman loved him.
And Henry adds:
He killed for the love of it–because he was quick-tempered–to avoid arrest–for his own amusement–any reason that came to his mind would suffice.
This was hardly the Cisco Kid of 1950s TV, was it? And it wasn’t acceptable onscreen in 1929 either, for this Cisco does not gratuitously shoot people for fun, but at least in In Old Arizona Cisco is a little villainous and doesn’t ride around with a fat sidekick doing good deeds all over the place.
Cisco’s girl is Tonia Perez, and she was…
… half Carmen, half Madonna, and the rest–oh, yes, a woman who is half Carmen and half Madonna can always be something more–the rest, let us say, was humming-bird.
In the movie she is Tonia Maria and she is played by Dorothy Burgess in her film debut, not a Western actress of renown, who plays the part as what in those days would have been termed a saucy wench, or possibly a vamp. She did do the dirty on Cisco, betraying him with a US Army sergeant from the Bowery (Edmund Lowe) but still, I’m not sure that she deserved her fate.
.
. 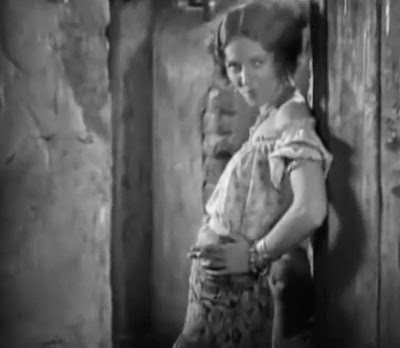 Dorothy Burgess vamping it up as Tonia
.
The sergeant part is built up a lot (well they had to fill out the plot somehow) but Lowe delivers his lines with great deliberation, one word at a time, taking forever. Perhaps there were mic problems or something. I know that on the set on another early talkie Western, The Big Trail, (directed by Walsh), the actors had virtually to shout. Sgt. Dunn says he is called Big Casino. That nickname got about, as Pat Garrett would have testified. Actually, Garrett didn’t die till 1908 so he might have taken umbrage. Lowe was quite well known, and as a sergeant too, because in 1926 he had starred in a Raoul Walsh directed silent, What Price Glory, as Sgt. Quirt.
.
. 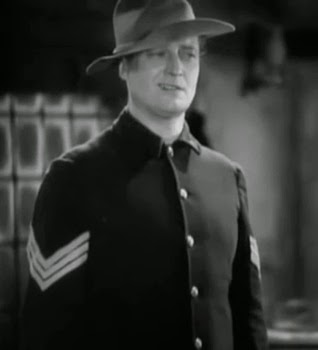 Does he look a tiny bit like John Wayne to you?
.
The Henry story was adapted into a screenplay by Tom Barry and I must say that all in all he did a good job, though it was his only Western.
The setting is quite late. One of the songs is Daisy, Daisy, which was written in 1892, and President McKinley (in the White House 1897 – 1901) is mentioned. There’s a phonograph. I love contemporary gadgets in Westerns.
.
. 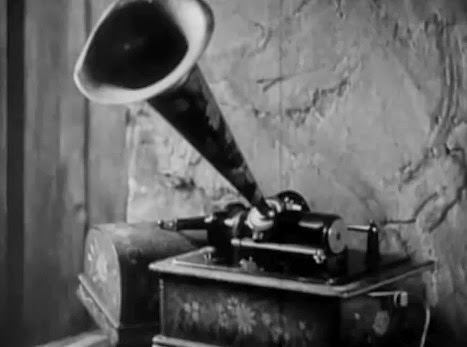 1898 gadget
.
One annoying feature is that Spanish-speaking characters talk to each other in a very heavily accented Pidgin English. “You know I lerve jou,” that kind of thing.
As was expected in 1920s Westerns, Cisco shoots the bad guys off their horses with a pistol at a thousand yards.
Well, well, I’m not carping. The movie is interesting to see, certainly for hard-core Cisco-istas but actually for anyone interested in the history of the Western. There’s a new Blu-Ray edition.
They all came back (except Tonia Maria, natch) in a sequel in 1931.
.
PrevPreviousThe Bride Comes to Yellow Sky (RKO, 1952)
NextJuarez (Warner Bros, 1939)Next