Movies like Warner Brothers’ 1939 Juarez, however good (or bad) they may be, are not really Westerns. Warners came out with Dodge City in 1939. That was a Western. This one, not so much.

Some motion pictures which happen to have Mexico as a setting are Westerns. The Magnificent Seven, of course,The Professionals and The Wild Bunch too.  But those are Westerns about American gunmen in Mexico, not films about Mexican history.
There is also another category, what we might call semi-Westerns, when gringos go south of the border and get involved in Mexican revolutions. Robert Mitchum did that a lot (The Wonderful Country, Bandido, Villa Rides) and movies like Vera Cruz, Wings of the Hawk, Duck You Sucker (or whatever you want to call it) or Bullet for the General are in this class. Many Pancho Villa stories had a gringo in there somewhere, to ‘justify’ Hollywoodism. Look at And Starring Pancho Villa as Himself.
But gringoless American films about old Mexico are really more historical costume dramas. Viva Zapata! is a first class movie, with horses and guns, filmed in Texas (the Mexican authorities were unhappy with the treatment of Zapata and didn’t want it shot there), starring Marlon Brando and Anthony Quinn, directed by Elia Kazan for Fox and written by John Steinbeck. Very American. But it still isn’t a Western. Still, we have a very liberal interpretation of what constitutes a Western on this blog, so bye for now, purists, have a nice day, see you again soon; we’re going to watch Juarez.
Wilhelm Dieterle (1893 – 1972) was born and died in Germany but is thought of as a Hollywood film director. He came to the United States when he was 37, in 1930, and put his talents to work for Warners. He had long been an actor in and director of European films and had worked under Paul Leni, FW Murnau, Conrad Veidt, Emil Jannings and other luminaries of German expressionist cinema. At Warners he specialized in biopics and made films about Madame Du Barry, Louis Pasteur and Emile Zola, the last two with Paul Muni in the lead (Paul probably passed on the first one). It seemed natural that Dieterle and Muni should have a go at Juárez next.
.
. 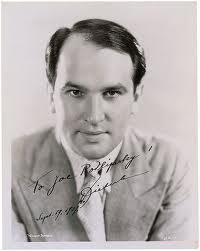 Wilhelm/William Dieterle
.
John Huston, no less, was one of the writers. The screenplay was based on a play by Franz Werfel and a novel by Bertita Harding.
Benito Pablo Juárez García was a lawyer of peasant Zapotec origin who served as Mexico’s President for five terms from 1858 to 1872. As a young man he managed to gain an education and he became a lawyer, then a judge, and governor of the state of Oaxaca from 1847 to 1852. He was driven into exile (he worked in a cigar factory in New Orleans) because of his opposition to the autocratic and corrupt regime of President Santa Anna. At the fall of Santa Anna in 1855 Juárez became a leading figure in La Reforma, then interim President as Mexico wallowed in bloody civil conflict, before being elected in his own right. His leadership of the struggle against Napoleon III’s forces and the overthrow of Napoleon’s puppet the Emperor Maximilian is a famous one.
.
. 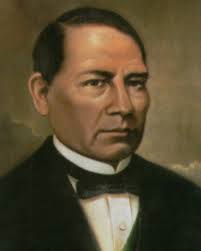 The Juárez of Dieterle and his writers, played by a heavily made-up Muni, is ethical, noble, almost saintly, and much is made of his admiration of and friendship with Abraham Lincoln, whom he tries to emulate in all but height (Juárez was a tiny man, 4 feet 6 inches or 1.37m in height). In the film he is often seen below a picture of Mr Lincoln.
.
. 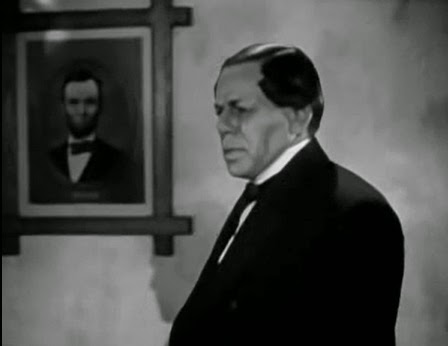 Benito and Abe
.
The support he received from President Buchanan is not mentioned. The anti-clericalism of Juárez is not addressed either, and Juárez seems to mastermind the fall of Maximilian personally and without assistance. Muni’s performance is stiff and formal but he makes the president an enormously attractive character. He certainly looks quite like Juárez.
.
. 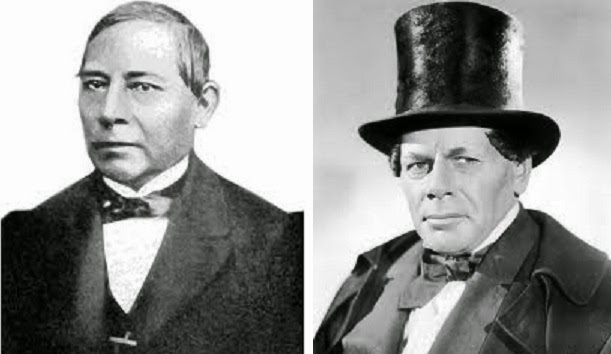 .
But the film manages a neat trick: it makes the great opponent of Juárez, the Emperor Maximilian, sympathetic too. The Hapsburg monarch is played by English actor Brian Aherne, who had made his Broadway debut in 1931 as Robert Browning in The Barretts of Wimpole Street. He was nominated for an Oscar for his portrayal of Maximilian and with just cause. His Maximilian is no arrogant autocrat or extravagant philanderer but a sensitive person who sincerely tries to do the right thing by the population of his new country. So we have two upstanding protagonists. Both Maximilian and Juárez have, however, in their entourage untrustworthy, ambitious and scheming people.
.
. 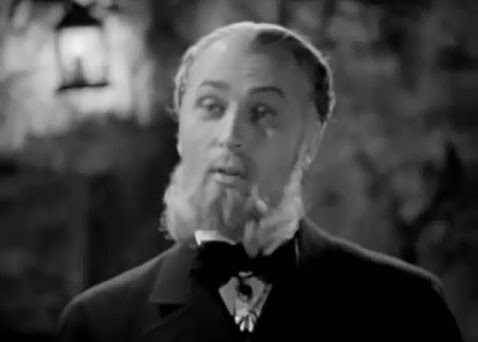 Aherne as Maximilian
.
Juárez has his (fictional) Vice President Alejandro Uradi, played by the excellent Joseph Calleia – such a good actor. He snipes at Juárez and finally launches a coup against him, which Juárez bravely (and alone) overcomes. Maximilian has repressive Maréchal Bazaine, played by Donald Crisp. I never thought Crisp good in Westerns – he was too English, too ‘posh’, somehow – but he does a good job here, constantly urging the Emperor to crush his subjects and grind them underfoot.
And behind them all lurks the Machiavellian presence of Napoleon III. Claude Rains was the ideal, almost inevitable choice for the scheming, vain, unreliable ‘ally’. Gale Sondergaard makes his wife Eugénie almost as politically underhand.
.
. 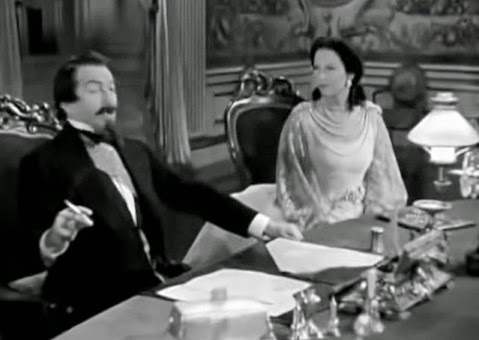 Napoleon III and Eugénie scheme and plot
.
While this is all rather simplistic, the plot of the film does generally more or less conform to historical fact as far as Hollywood ever does. None of Maximilian’s love affairs are shown, or even hinted at. His overspending and lack of interest in the real welfare of his people are also not addressed. But it could have been a lot worse.
.
. 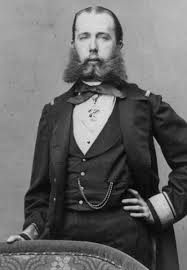 The real Maximilian, not quite so noble
.
Maximilian is supported, almost fanatically so, by his wife Carlota (Charlotte), played by Bette Davis. There’s a sickly sentimental scene as she prays to the Virgin Mary for a son she cannot have. Later, furious at Louis Napoleon’s betrayal of her husband, she goes to Paris to rage at the “bourgeois Bonaparte”. There she declines into mental illness, giving Bette full license to chew the scenery.
.
. 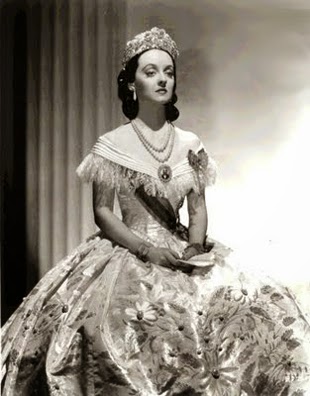 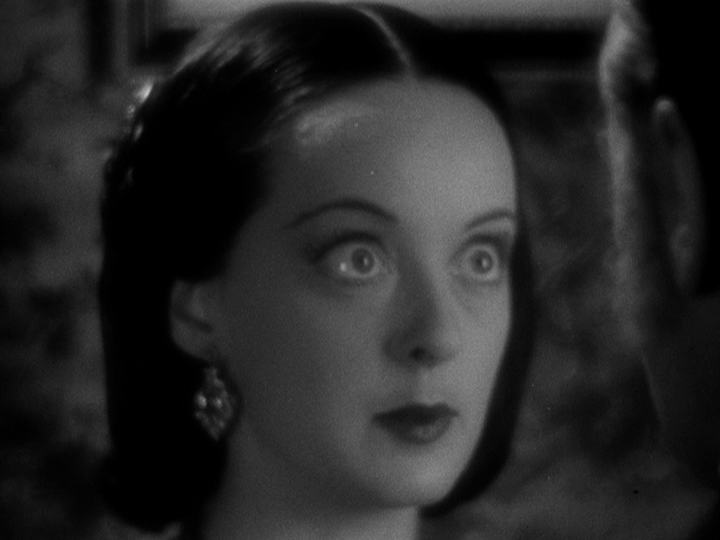 …goes off her rocker
.
Juárez is supported by John Garfield as a young Porfirio Diaz who gives no clue as to his future role as ruler of Mexico. Gilbert Roland is a super-loyal disciple of Maximilian who, Judas-like, finally betrays him, doing wrong for all the right reasons. Irving Pichel and Monte Blue take small parts.
.
. 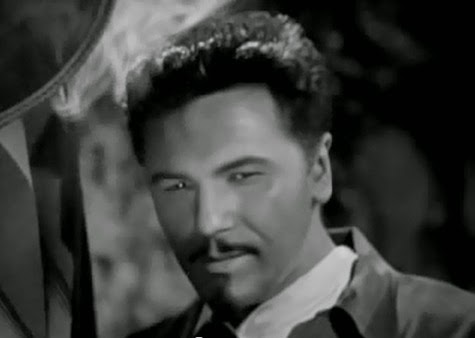 A rather dashing Porfirio Díaz

The original music by Erich Wolfgang Korngold is very well done and cleverly incorporates variations on the themes of various national anthems when those countries are mentioned or a representative of that nation appears. Korngold adapted parts of the score, the love theme in particular, for his violin concerto in D major, op. 35, in 1945.
.
. 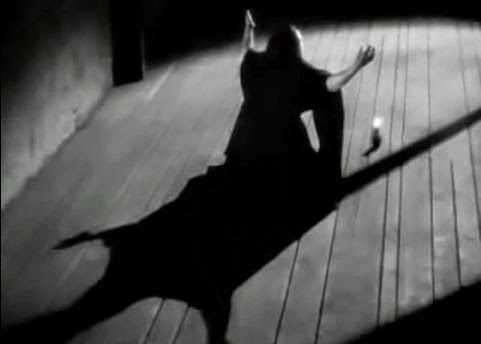 Very dramatic, occasionally melodramatic photography
.
Visually the picture is very fine and Tony Gaudio received the other Academy Award nomination of the film. It’s in black & white. There are scenes clearly suggested by Goya’s portrayals of another brutal war.
.
. 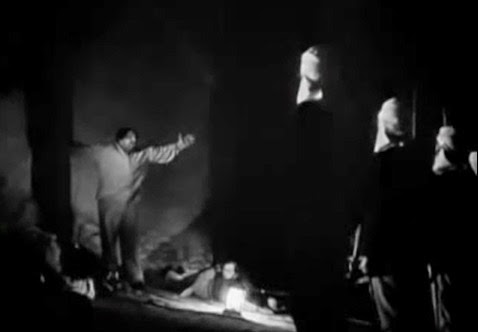 Goya influence
.
If you’re willing to watch a non-Western every now and then (it does happen) you will probably enjoy this movie. Take it with a pinch of salt – that goes without saying. It’s too long. But it has a decent vaguely leftist agenda and overall it’s an enjoyable excursion from Los Angeles into nineteenth-century Mexican history.
.