.
He used his fists
.
.
One of the lesser-known but still interesting characters of the old West was a man who bore no intrinsically memorable, sonorous or unusual name, such as Wyatt Earp or Jesse James. But even a prosaic ‘Tom Smith’ can make his mark and leave a reputation behind him. The nickname helps to add color, as Wild Bill Hickok, Mysterious Dave Mather and Black Jack Ketchum could testify. Perhaps, too, Bear River Tom’s lesser fame was due to his rather un-dime novelish or Hollywood rep for bringing them in alive and using fists more than a gun. There were lawmen who were disinclined to use guns: Wyatt Earp, for example, despite Hollywoodiana, was a man who rarely pulled a trigger. He used a gun, but preferred ‘buffaloing’ recalcitrants by knocking them over the head with the barrel rather than actually shooting them.
Unlike Earp, Tom Smith hardly appeared in novels or on the screen at all. There was a 1952 Death Valley Days episode, when he was played by Ronald Reagan, but I know of no other appearance. Please correct me if I am wrong (by leaving a comment).
.
. 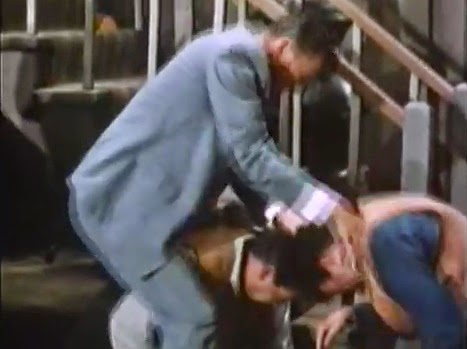 Ron subdues Abilene rowdies
.
That dislike of firearms did for Tom in the end, though.
Thomas James Smith was probably born in New York in the 1830s – one source gives July 21, 1830 – but we know little of his early life. From descriptions and his photograph we know that as a young man he was tall, nearly six foot, 170 pounds, intelligent and quietly spoken. He had a steady gaze, longish side-parted dark hair and a fashionable, bushy mustache. He was said to have been a professional middleweight prizefighter.
.
. 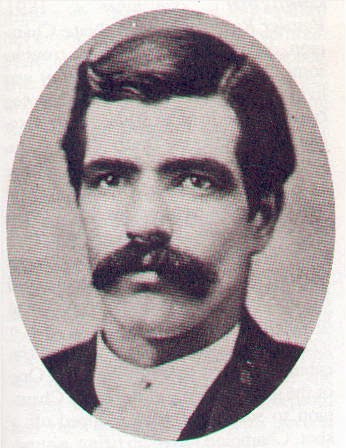 The only known photograph of Bear River Tom Smith
.
There is a story that he was a police officer in New York but left the force and moved West when he accidentally killed a fourteen-year-old boy. Out West, Smith worked for the Union Pacific in Nebraska. It was the time of the railroad camps with their ‘hell on wheels’ saloons. Tom Smith was one of the wild ones. In Bear River, WY, drinking, gambling and fighting were a way of life. On one occasion a mob of railroad men busted up the newspaper office, tore down the jail and released all the prisoners. Vigilantes responded with their own form of ‘justice’. It took troops from Fort Bridger to restore order. Tom Smith was on the side of the exploited laborers. He charged a barricade, emptying his revolvers into it, and was shot, almost fatally, by police. He survived but was a changed man.
.
. 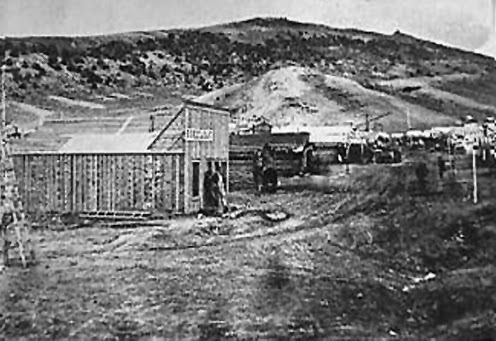 Bear River, WY, in the early days
.
Few of these railroad camps achieved anything like permanence as settlements but Bear River was one. It incorporated, and hired lawmen to keep the peace. The peace officers had to be pretty tough, and Tom Smith fitted the bill. He was accepted by the laborers, and riots and shootings declined. Tom gave up gambling and drink, and he was rarely seen with a gun. His steely look and handy fists were usually enough. Tom Smith ‘tamed’ Bear River.
Tom then moved to Kit Carson, Colorado, where he worked with the tough lawman Pat Desmond (another interesting character – another day) and strengthened his reputation for a gutsy, but gunless, peace officer.
In 1870 the Kansas town of Abilene advertised for a marshal. The Texas cowpunchers driving their herds there to the railhead were making the place lawless and dangerous. Smith applied but the mayor of Abilene was unconvinced by the quiet man. Abilene went through a series of incompetent law officers (two St Louis police officers were hired but resigned before the end of their first day on the job) and increasing violence, and in the end the mayor changed his mind and invited Smith to take the job.
.
. 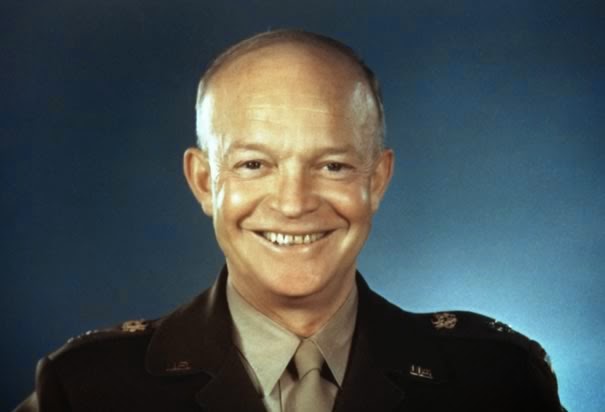 Ike was a fan
.
Smith’s first achievement was to convince the elders that there would be no peace in Abilene until the punchers surrendered their firearms on entering town. Smith set about enforcing the new ordinance. When cowman ‘Big Hank’ Hawkins went for his gun, Tom laid him out with a mighty punch. A week later he had to use his fists to set about Hank again and this time the marshal ran the troublemaker, and his partner, ‘Wyoming Frank’, out of town. The trail hands got the message and began checking their weapons at the saloons. It is said that Bear River Tom toured the Abilene red light district and came back with a wheelbarrow full of ladies’ derringers. Now that I would like to have seen.
Smith’s salary was raised to $150 a month plus two dollars for every arrest. He was presented with a pair of pearl-handled revolvers, which he used, Earp-style, as clubs. Tom survived two assassination attempts. Some semblance of peace began to reign in Abilene.
Towards the end of 1870, Smith was appointed deputy US marshal, headquartered in Abilene. On November 2nd, a deputy, James McDonald, asked him for assistance in arresting one Andrew McConnell, an alleged murderer who was to be found on a farm out of town. The deputy and marshal rode out to the ranch, where they found two men, McConnell and a friend of his named Moses Miles. As Smith disappeared inside the farmhouse to serve the warrant on McConnell, Miles and McDonald
remained outside, eying each other suspiciously. Suddenly, Miles picked up an old carbine, aimed at the deputy and pulled the trigger. As was so often the case, the gun misfired. McDonald scuttled off and did not stop running until he reached town, leaving Smith alone with the two gunmen. Tom was wounded in the chest by a gunshot, probably from McConnell, but grabbed his assailant round the neck and dragged him outside. There, however, Miles clubbed Tom from behind with the carbine. Miles then used an axe to decapitate the lawman and so died Bear River Tom Smith, who had never shot a man in his life.
McConnell and Miles were later captured and sentenced to life imprisonment. Tom was buried with honors in Abilene. The new town marshal was the famous gunfighter Wild Bill Hickok. Dwight D Eisenhower, who grew up in Abilene, much admired Tom Smith and often visited his grave.
.
.
Ernest Haycox’s 1941 novel Trail Town featured Dan Mitchell, a pre-Hickok lawman in River Bend (clearly Abilene), and it was made into a movie, Abilene Town, in 1946 starring Randolph Scott as Mitchell. But really there’s no resemblance to Bear River Tom. For one thing, Randy goes heeled all the time.

.
.
Sandy Wilson wrote an article, Able Marshal of Abilene, in Wild West magazine, February 1995 issue. There was an (anonymous) article in the Friday, September 29, 1899 edition of the Kansas City Star entitled Brought Order to Abilene (Dickinson County Historical Society, Abilene, KS.) and the same historical society holds The Death of Tom Smith as told by Walter D. Nichols by HL Humphrey, 1931. I don’t know of any full biography, though there is a work of historical fiction, the e-book Bear River Tom Smith by James Bankes, which I have not read and so do not recommend necessarily.
All in all, though, I do kinda agree with Dwight.
.
PrevPreviousSam Bass in fact and fiction
NextStagecoach (CBS TV, 1986)Next

PrevPreviousSam Bass in fact and fiction
NextStagecoach (CBS TV, 1986)Next
Jeff Arnold © 2022 – All rights reserved – Designed by BetterCallChris
Scroll Up