.
The weakest of the three Stagecoach versions but still just about watchable
.
.
John Ford’s Stagecoach, though it was, in my view, far from the best ever Western, is certainly one of the most famous and many people would put it right up there with the greats. It was not the first adult Western, as has been claimed, or even the first adult talkie Western but it was an intelligent ensemble piece, (loosely) based on a decent short story, Ernest Haycox’s Stage to Lordsburg, and indirectly and vaguely, through Haycox, on Maupassant’s Boule de Suif. It did not introduce John Wayne to A-Western stardom – Raoul walsh did that in The Big Trail in 1930 – but it did bring him back to fame after the previous decade languishing in B-oaters and it showcased him alright, and made him a star.
.
. 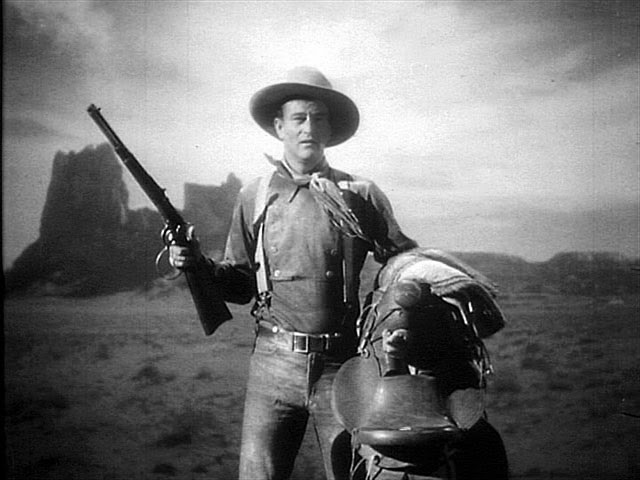 The real Ringo, 1939
.
Though over-talky, with too few location shots and occasionally slow, the movie did have an actionful climax with Canutt stunts. It is not truly great but it is a very fine film.
A remake was inevitable. Fox did it in color in 1966 with, on top of the stage, Slim Pickens replacing Andy Devine at the reins alongside stocky Van Heflin in the shotgun messenger/marshal role first taken by George Bancroft. Despite solid (not to say stolid) direction by Gordon Douglas, and William Clothier photography of nice locations (the story was transposed to Wyoming), it suffered from, inside, Ann Margret as Dallas and Alex Cord as Ringo.
.
. 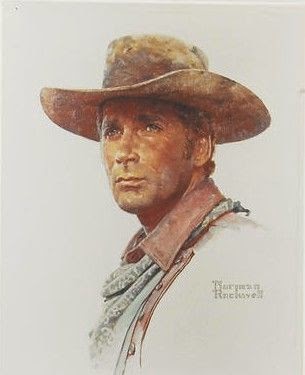 A pale imitation (sketched by Rockwell, though), 1966
.
They simply didn’t cut it. Bing Crosby was just about alright in the Thomas Mitchell drunken doctor role but Mike Connors as the southern gambler Hatfield and Red Button as the whiskey drummer Peacock were too weak. The movie is watchable and no worse than many 1966 Westerns but really that’s about all you can say.
Country-singer Westerns became quite a fashion in the 1980s, and in ’86 Johnny Cash, Willie Nelson, Waylon Jennings and Kris Kristofferson had a go at Stagecoach. The movie opens to the inimitable Willie warbling and he did all the music (I thought I detected an embryonic Borderline in there at one point). Kris gets the Ringo part, though in deference to his 50 years he declines to be known as the Ringo Kid, preferring just Ringo or his more prosaic moniker, Bill Williams.
.
. 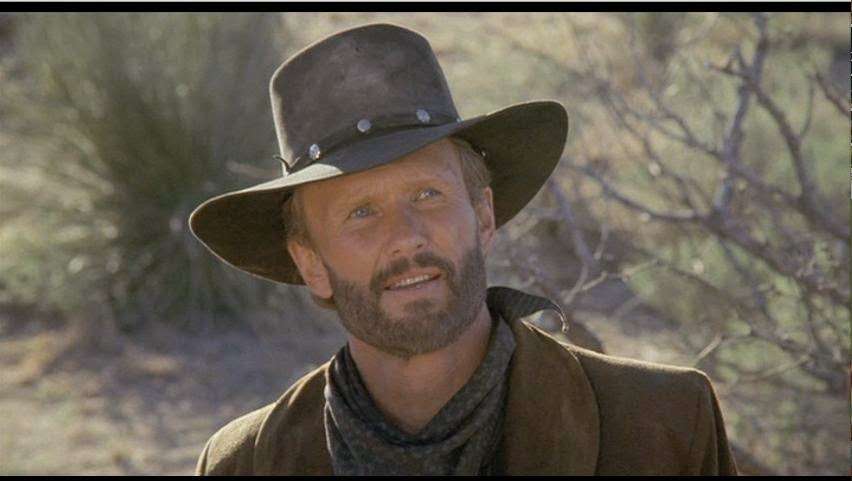 The Ringo Kid in 1986, aged 50
.
Ah, the magic of the Ringo name! Click here for our essay on that vital matter. Johnny Ringo (John Peters Ringo, 1850 – 1882) was in fact a rather staid, depressive character who probably committed suicide, but on the Hollywood screen (and the small one) he was all that a dashing gunslinger could be. Gregory Peck, Richard Boone, John Ireland and Jim Davis, among many others, gave us their Ringoes and pretty ornery and good with a gun they were too. Well, Kris is OK in his version, I guess.
As an actor, though, Willie Nelson made a great singer. In this one he is Doc Holliday, on his way to Tombstone. Yup, he’s the dentist who delivers the baby (though hardly a drunk). What was Doc Holliday doing in Stagecoach? Don’t ask.
.
. 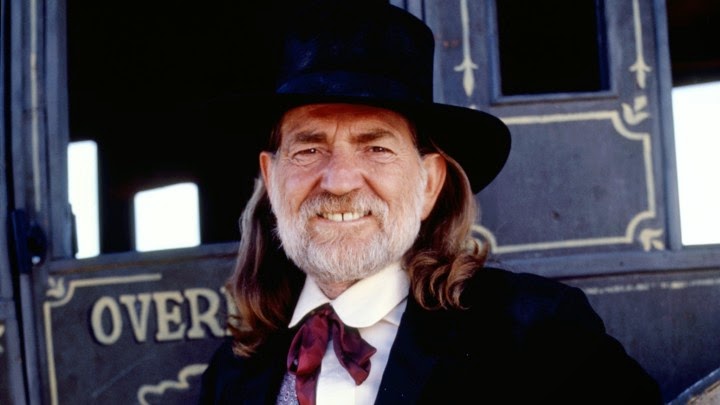 Willie as Doc. Yes, well.
.
The story starts in the oriental Saloon in Tonto and they are going to Tombstone, through Geronimo territory. The usual suspects assemble as passengers, or almost. The prostitute Dallas is there, played by Elizabeth Ashley, Nancy Sue in The Great Scout and Cathouse Thursday, who is modestly described in IMDb’s biography as “divinely outgoing in personality” but who, in this picture, isn’t. The crooked banker Gatewood also takes his place, impersonated this time by Anthony Franciosa (Rodriguez from Rio Conchos). The pregnant Army wife Mrs Mallory also makes an appearance (Mary Crosby). The drummer Peacock is Londoner Anthony Newley. The worst actor, though, even worse than Willie, is Waylon Jennings as Hatfield. It’s really quite painful to watch.
.
. 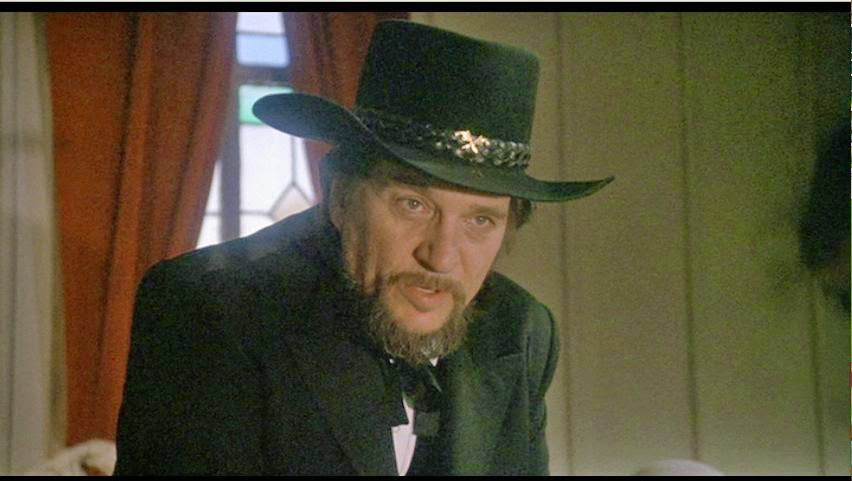 Waylon as the Southern gambler Hatfield. Oh dear.
.
Up on the box, John Schneider from Dr Quinn, Medicine Woman is the Overland stage driver and beside him as the Tonto marshal taking a turn as guard is the best actor of the cast, Johnny Cash. Cash was in a lot of TV Western shows and had also been surprisingly effective as a tired gunslinger on the big screen opposite Kirk Douglas in A Gunfight in 1971. Cash’s marshal is tougher than the original and much less sympathetic to Ringo.
.
. 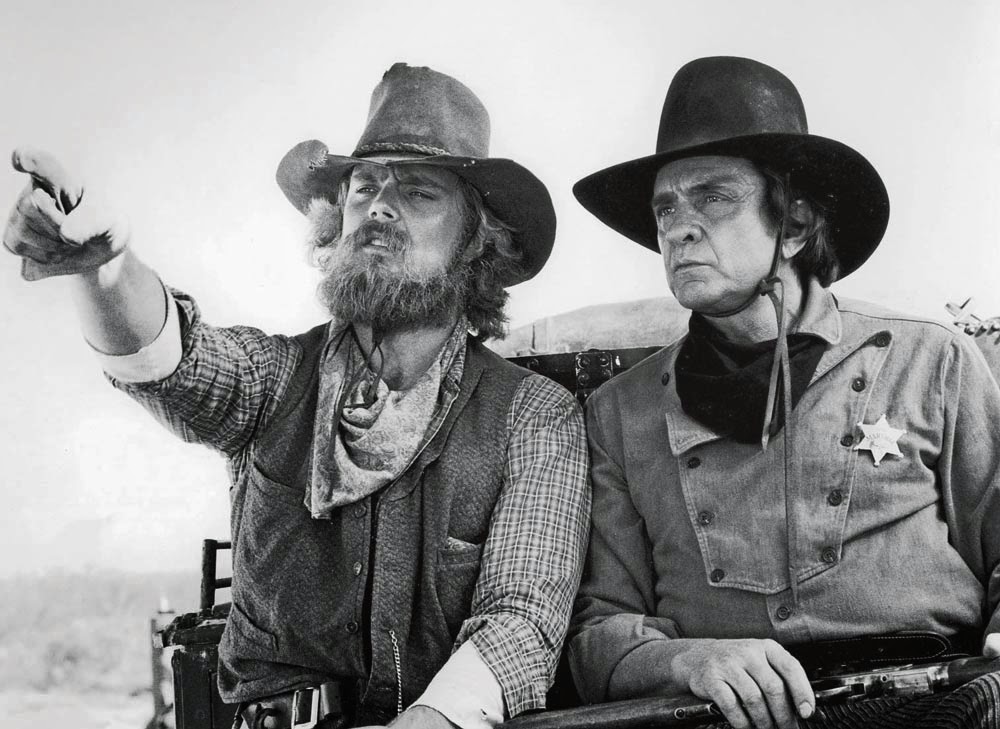 Schneider at the reins and Cash pretty good as Messenger
.
There’s little subtlety. It’s not an art film. The scene where Gatewood refuses to eat with the whore, for example, is bungled by very experienced TV Western director Ted Post, who should have done better. The characters are more modern and cynical than in 1939 (or 1966), and the Dallas/Ringo relationship is especially hard-bitten and knowing. Just occasionally some attempt is made with the writing to lift it, such as when Willie appears to quote Saki in declaring that “There’s nothing a child hates more than a good example.” The teleplay was written by James Lee Barrett, something of a Wayne/McLaglen groupie. All in all, though, it’s a made-for-TV movie, with all that that implies.
The drummer leaves with the Army when they get to Apache Wells and it is Gatewood who is shot with an Indian arrow. At the end it is the four singers who walk down to fight it out with the evil Plummers. The bartenders take the mirror down before the gunfight, in time-honored fashion (they were already doing this in Ford’s 1917 Straight Shooting and I suspect that wasn’t the first time). It all climaxes with a classic Ringo/Luke Plummer quick-draw pistol showdown.
.
. 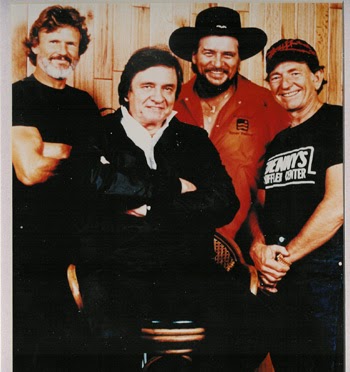 The Highwaypersons, mid-1980s
.
It’s the chemistry between the members of The Highwaymen (the supergroup was founded the year before, and this movie functions as a sort of commercial for it) that fuels this film rather than thespian skill, and, as Rolling Stone said, “Stagecoach cracks its whip by focusing on country star power, not necessarily acting ability.” Never mind, it’s still quite fun, in a B-Western kinda way.
.
PrevPreviousBear River Tom Smith
NextCowboys & Zombies (Mattia Borrani Productions, 2011)Next