One of the better Audie Westerns
.

Bullet for a Badman was the 22nd and penultimate of the many Westerns Audie Murphy made with Universal, a series that had begun way back in 1950 with Kansas Raiders. By 1964 some viewers accused the studios and the actor of being repetitive and they allege that the later pictures are weak. Murphy himself grew tired of them and said that the only thing that ever changed in them was the color of his horse.
.
. 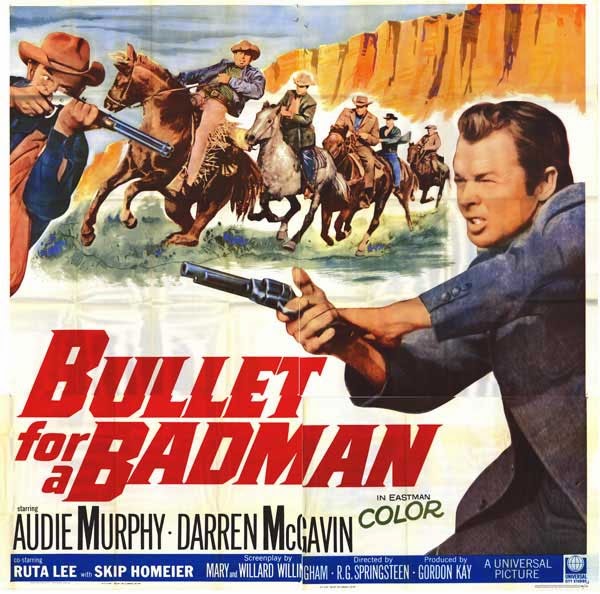 One of the better Westerns Audie did for Universal
.
Judging by Bullet for a Badman, however, this is not a fair criticism. Audie was a much better actor than he gave himself credit for (as anyone who watches him as Burt Lancaster and Audrey Hepburn’s brother in the John Huston-directed The Unforgiven in 1960 will know). Universal’s Audie Westerns had high production values and were usually shot in attractive Western locations by good cinematographers. This was especially true of Bullet, photographed by the great Joe Biroc up at Lone Pine. Support acting was always competent or better and the director was rarely top drawer but Universal didn’t use nonentities either. Bullet was helmed by RG Springsteen, a hugely experienced hand, whose experience with Westerns ran from 1936, when he was assistant director on Fast Bullets, to directing George Montgomery in Hostile Guns in 1967: 143 film and TV oaters in all. True, they were hardly great classics of the genre, but they were never less than professional.
One good feature of this movie is that there are shades of gray in the characters; they aren’t all simply white hats or black hats, though it is true that the headgear shade was generally on the darker side. Most of the characters are pretty bad eggs. Not Audie, of course. He is tough but decent, as he always was. The story is a fairly simple one: there is a charismatic outlaw, Sam Ward (Darren McGavin) who escapes from a life term in prison and comes looking for his ex-wife Susan (Beverley Owen), who is now Mrs Murphy. She doesn’t want to know. She has cast off Ward and settled down with Audie, and her son thinks Audie is his dad. Audie, once a Texas Ranger, is an honest farmer and has hung up his guns. Of course we know he will soon be strapping them on again.
Well, Ward and his gang rob the local bank and cold-bloodedly murder the bank clerk and there is a big shoot-out in town from which only Ward escapes, to join his latest squeeze, Lottie (Ruta Lee). A posse is organized, of none too reputable men, and they set out after Ward. Audie does too, separately, but joins up with them. It is now a question of who is worse, the murderous robber or the greedy and brutal pursuers?
.
. 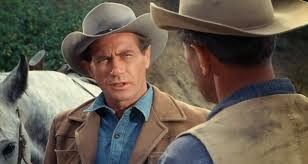 Outlaw former pal of Audie, Darren McGavin
.
The posse, in order of badness starting with the worst, is comprised of sadistic saloon slicker Alan Hale Jr; unscrupulous lowlife Skip Homeier; crusty old buffalo hunter George Tobias; young gunslinger Berkeley Harris; and greedy but squeamish townsman Edward Platt. Hale is splendid, as he always was. He rarely played the out-and-out baddy but when he did, boy, was he bad. Homeier had of course made a career of the punk kid role ever since shooting Gregory Peck in the back in The Gunfighter in 1950. By the mid-60s he wasn’t a punk kid any more, just a punk. Tobias, Harris and Platt were not so well known to Western fans: Tobias usually played the slightly dim pal of James Cagney and neighbor Abner on Bewitched but he also had a sideline in Western heavy from 1940 onwards and was especially good in Fox’s excellent Western noir Rawhide in 1951. This was Harris’s first big-screen Western and the following year he had a small part in Shenandoah but mostly he did TV work. Platt had one of those recognizable faces and you might place him from Get Smart or as James Dean’s juvenile officer in Rebel Without a Cause but he appeared in Westerns from Backlash in 1956 to Santee in 1973, and was a regular of Western TV shows.
.
. 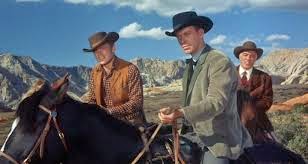 Three members of the posse of lowlifes: Berkeley Harris, Skip Homeier and Edward Platt
.
The excellent Ray Teal is in it and should have been in the posse, maybe as a corrupt deputy, but was wasted just sweeping the sidewalk back in town. Really annoying, that.
.
. 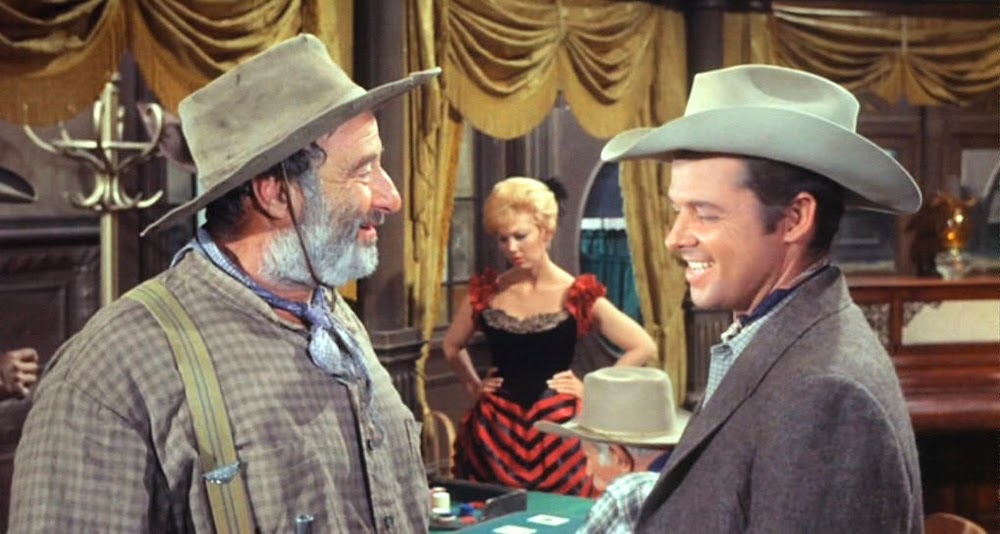 George Tobias enjoyable as none too scrupulous buffalo hunter and tracker
.
Darren McGavin plays the main bad guy, who turns out to be a good badman. McGavin didn’t really ‘do’ Westerns and you probably know him as Kolchak the Night Stalker but he made 74 Western appearances between 1951 and ’78, mostly TV ones, though he had been in The Great Sioux Massacre as No. 2 to Joseph Cotten. Curiously, one of those TV Western shows he did was Episode 2 of Cimarron Strip in 1967 which had a remarkably similar plot to Bullet for a Badman – bad guy escaped from prison wants his ex-wife back and is ready to kill the new husband to achieve that, but gets into Indian territory. McGavin’s OK as the badman, though it really needed a more charismatic charming-rogue type, maybe Dan Duryea or Lyle Bettger.
Bullet for a Badman was written by the Willinghams, Audie pals who wrote his Whispering Smith series. They were usually steadily competent rather than inspired on Westerns but I must say that in Bullet they did rather a good job. I like the way that the cold-hearted badman Ward gradually shifts into the Audie goody camp and the officers of ‘the law’ turn out worse than the villain.
.
. 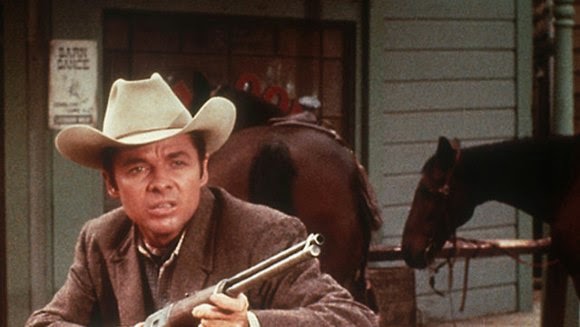 Audie doing his thing
.
Of course there should have been seven in the posse and there were only six, so that’s why they probably were all (except Audie, natch) killed, by Indians or each other. No gang or posse should number six, or eight, seven being the Mystical Western Number.
One of the better Audie Westerns, and definitely worth a watch, e-pards.
.
PrevPreviousFace of a Fugitive (Columbia, 1959)
NextA Ticket to Tomahawk (Fox, 1950)Next

PrevPreviousFace of a Fugitive (Columbia, 1959)
NextA Ticket to Tomahawk (Fox, 1950)Next
Jeff Arnold © 2023 – All rights reserved – Designed by BetterCallChris
Scroll Up