.
Van (not quite) the man
.
.
The Siege at Red River, aka Siege at Red River and also ka Gatling Gun, was a Panoramic Productions, er, production released by Twentieth Century Fox. It was unusual as a Western in that it starred Van Johnson.
Mr Johnson was noted as an MGM song-and-dance man, especially during the Second World War, when other stars were off in the forces, and was popular in roles of the clean-cut, amiable, boy-next-door type. Not being a fan of musicals or indeed anything much apart from the true and proper purpose of life, viz. Westerns, I didn’t know anything about Van Johnson during the 50s and 60s, and still don’t know that much even now. So I was curious to see how he did in the saddle.
.
. Van ‘n’ Joanne
.
Not very well. Westernwise, he was only in one 1959 Zane Grey Theatre episode and one in 1971 of The Virginian; he did a 1947 ‘romance’ which does not deserve the title of Western, one political spaghetti in 1969 and Siege at Red River. In effect, Siege was his only Western movie. He didn’t convince in it.
It’s a Civil War tale of a villain selling a Gatling gun to the Indians, who use it in an attack on a fort. If Van wasn’t quite the man, fortunately this villain was none other than the great Richard Boone, and wonderfully, snarlingly villainous he is too. What a superb actor Mr Boone was, and nowhere was he better than as a badman in Westerns. From a bit part in Pony Soldier in 1952 to a fitting end-of-career appearance as the evil Sweeney in The Shootist in 1976, Boone shot, cheated and snarled his way through dozens and dozens of oaters. He was never less than excellent (except maybe in those spaghettis). Have Gun – Will Travel was probably my favorite TV Western as a boy. I still think it’s good today. Of course, in Have Gun he was basically Good, dammit, but there was always a hint of the bad, wasn’t there. He was a gun for hire after all. And he had a derringer. But think of him as Usher opposite Randolph Scott in The Tall T or as Grimes opposing Paul Newman in Hombre. Superb.
.
. 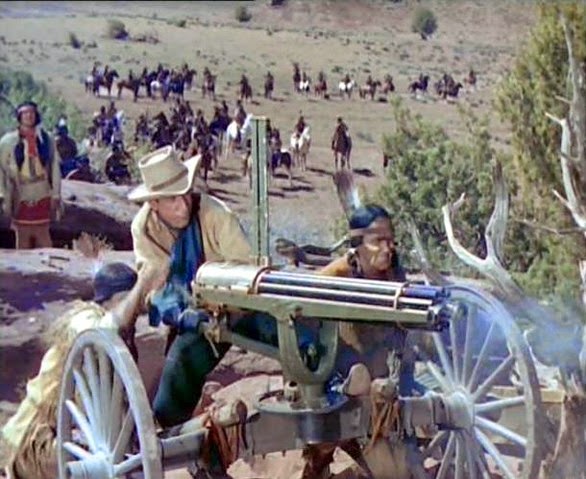 Boone aids the Indians attack the fort with a stolen Gatling gun he’s sold them
.
The picture has other plus points. It’s visually attractive with some great scenes (note, for example, the wagon being chased by horsemen in the dust, with a mesa in the background; it’s a great shot). It was photographed in Technicolor by Edward Cronjager, a true master, in wonderful Utah locations, in Castle Valley and along the Colorado River. It looks fine on my new W I D E screen TV. The climax battle scene is pretty spectacular.
Joanne Dru plays a rather snooty dame. Boone lashes out with his whip at her arm when she reaches for a rock to club him with, and he growls viciously, “Next time it’ll be your face.” Splendid. Early on there are a few low comedy scenes and Ms Dru isn’t too good at those. I am generally a great Joanne fan but it must be admitted that she wasn’t always brilliant, especially in later Westerns.
.
. 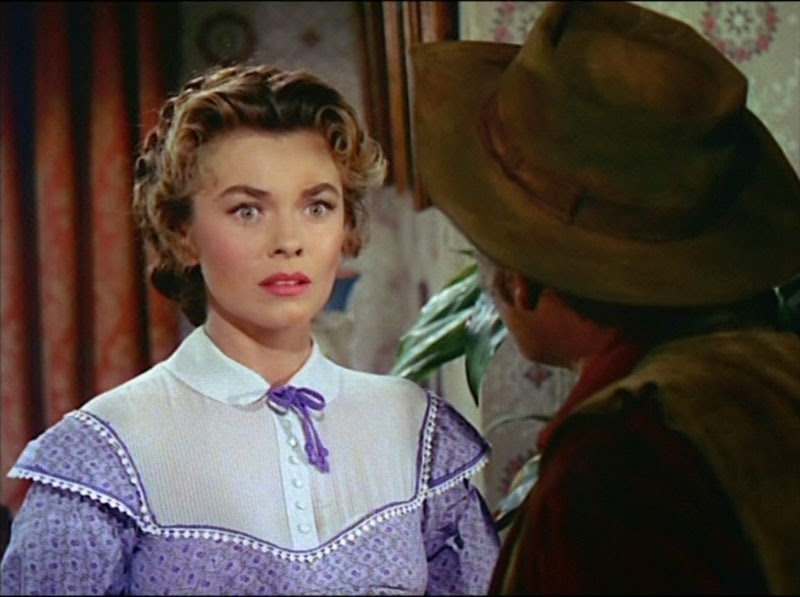 Dru not at her best. Red River it ain’t.
.
There’s an (unintentionally) hilarious bit where la Dru passes a baby to an Indian maid who shakes it, ostensibly to get it to sleep, but she shakes the wrapped doll more vigorously than I do my martinis.
There are some corny bits too. Smoke signals and one of those wooden toy forts they always have. The Indians (various tribes) are one-dimensional whooping dervishes. But all in all, there are enough original and interesting moments to grab the attention despite the Johnson/Dru performances, and this is definitely worth a look.
.
. 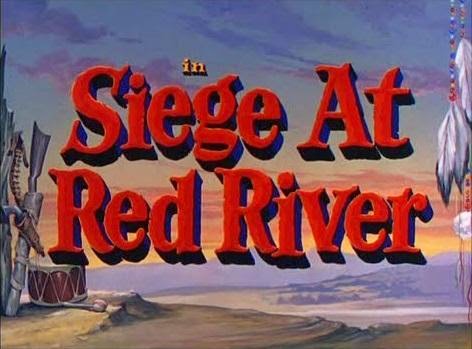 Nice looking film
.
It was directed by Rudolph Maté, who made seven Westerns including Three Violent People with Charlton Heston, The Violent Men with Glenn Ford, The Far Horizons with Fred MacMurray and Heston again, and Branded with Alan Ladd. Polish-born Matéhad had a distinguished career as a cinematographer and director in Europe before the war, though not such a great one in Hollywood (DOA being about his best work), but he liked the Western.
Doc from Gunsmoke (Milburn Stone) is a sergeant. Jeff Morrow from Union Pacific on TV is a scoutish sort of fellow, and Craig Hill, who later did all those dire spaghettis, is there too.
.
. 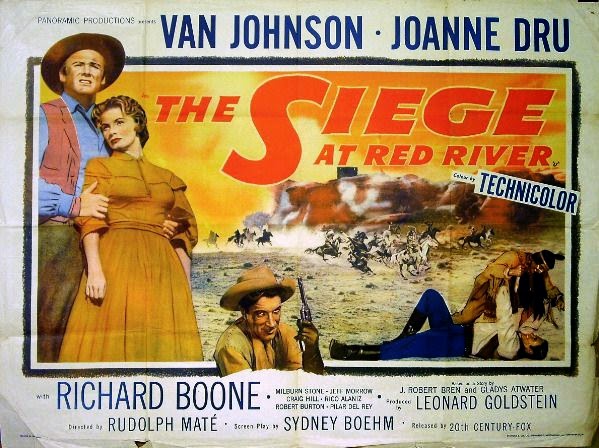 Colorful
.
It does make you think of the evils of the machine gun. In a way, the single-shot firearm limited battlefield mayhem for centuries. It was a weapon that required accuracy and skill and could be used for peaceful ends such as hunting. The repeating rifle and revolver wrought a far worse destruction on humankind. But worst of all was the invention of the machine gun, where a single man could mow down swathes of soldiers. That’s progress for you.
I’d give this Western a go if I were you – but don’t expect greatness. 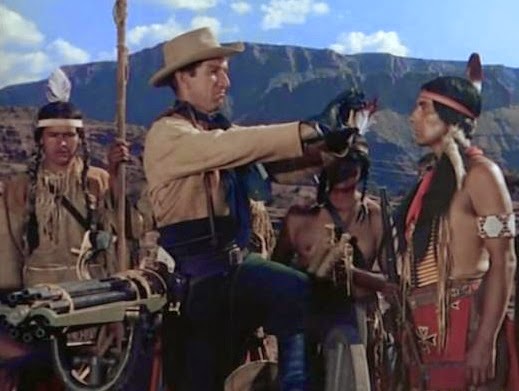 Love the gloves. He even wears them to play poker.