By 1972 revisionist Hollywood Westerns were in full flow. Former heroes were being debunked all over the place. And at the same time, with the civil rights movement swelling, post-Guess Who’s Coming to Dinner Sidney Poitier was in a good place to make a mainstream picture about the black West.
Actually, black Westerns were not new. Sergeant Rutledge twelve years before has a claim, at least, to be considered a black Western. Before then, in 1938 Herb Jefferies had starred in Two Gun Man from Harlem. (In fact it was only known recently that Jefferies wasn’t black at all but of Irish-Italian descent. He’d been passing for black for years in order to work in all-black jazz bands.)  Still, Westerns with black heroes were hardly common and the important part that African-American people played in the history of the West was pretty well completely ignored, at least by Hollywood. Buck and the Preacher partially rectified that.
.
. 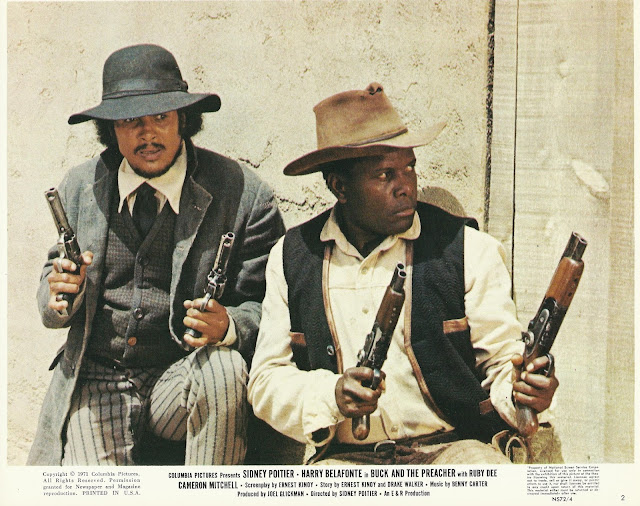 The preacher and Buck
.
I say Poitier ‘made it’. Well, he starred in it as Buck and he directed it (with uncredited Joseph Sargent; it is said that Poitier took over from Sargent when dissatisfied with how the picture was developing). Harry Belafonte was the eponymous clergyman and Belafonte Enterprises was one of the production companies. Let’s call it a joint venture.
So the movie is a worthy corrective, then, and interesting. I quite like Buck and the Preacher but I am the first to admit that it isn’t a terribly good film. It can’t quite make up its mind whether to play it as a zany romp or a deadly earnest anti-racialist picture. Some of the direction is not ultra-professional. The key shoot-out in the whorehouse, when master villain Cameron Mitchell (almost unrecognizable in false facial hair) is killed, is fluffed. We don’t even get to see Mitchell gunned down, just a flurry of shots. I do like the way, though, that the brothel madam is outraged that a Negro should enter her establishment. “I got my reputation to think of,” she complains.  Cameron Mitchell was always very good in Westerns but here he doesn’t get the chance to be. He’s a one-dimensional cartoon villain.
Much of the film is one-dimensional. The black people are all noble and beautiful while the whites are all murderous bigots. But after a lifetime of being shown the other way round, we can forgive. The exceptions are Belafonte’s preacher, who is roguish and half-bad, and the white sheriff (John Kelly) who kinda respects the law and is half-good.
Personally I like the music, by jazzman Benny Carter. It has been criticized as being inauthentic but just a moment, since when have Western music scores been “authentic”, and authentic to what? This one has a bluesy harmonica tint to it that goes well with the subject matter and actors.
Belafonte has the juicier part. He plays it with a set of false teeth, designed to be decaying and greenishly unwashed, but these gnashers do little for his diction. Though basically a conman, he still turns down the $500 offered him for information leading to the capture of Buck and he does the right thing. Poitier, as the black wagon master who leads freed ‘colored’ settlers West to find a home, plays it straight. He doesn’t ride too well though gives himself plenty of traveling shots galloping nobly over the plains. Funny, that, because he had been quite good on a horse in a previous Western outing, Duel at Diablo. I actually think Poitier was good in Westerns. Pity he didn’t do more – Diablo, Buck and a 1995 TV mini-series Children of the Dust were all.
The Indians are goodies too, of course, and come to the aid of the ‘black white man’.
The heroes carry firearms. There were many ordinances against black men out of the army carrying guns. Doubtless those laws were often more honored in the breach than in the observance; still, Sid makes no effort at concealment, wearing one of the classic Western (movie) double holsters.  In them he has two cut-down over-and-under shotguns, which he fires from the hip in a way that if done really would probably have knocked him into the next state but never mind. They bring back fond memories of Steve McQueen, El Dorado and other movies where cut-downs are used. The preacher has a Colt concealed in his bible. When Jed rescued his partner in Cat Ballou he had a gun hidden in a bible, and of course Bob Mitchum was similarly sneaky in 5 Card Stud, but these were little derringers. The preacher has to have one of those big bibles, a lectern edition, to accommodate his (1870s) .45.
The movie was shot, competently, down in Durango (the Mexico one) by Alex Phillips (Alfredo Garcia). The color is good.
Ruby Dee plays Ruth, Sidney’s amour. She’s fine. She was a leading light in the non-violent civil rights movement. I also thought Julie Robinson very effective as the Indian chief’s wife and interpreter.
.
. 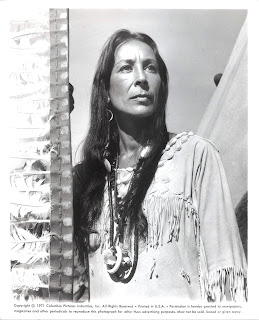 Julie Robinson as Sinsie
.
There are repeated scenes of characters riding double. I’m not sure what the significance of those is but only the good guys do it (preacher/small boy, Indian chief/wife, preacher/Buck).
One of the whites says, “We gotta keep things like they was,” a sentiment as doomed as it is ungrammatical.
There’s some mumbo-jumbo about an elderly black man casting bones to tell the future. He foresees a lush green paradise-like valley where they can settle, and the promised land duly arrives at the end.
Buck and the Preacher is far from being a great Western but it’s not junk either and would repay a watch. In fact it’s essential viewing from a ‘history of the Western’ point of view.
.
PrevPreviousCast a Long Shadow (UA, 1959)
NextThe Gun Hawk (AA, 1963)Next