.
Rod ‘n’ Rory ride again
.
.
Despite Allied Artists’ wish to move on from its modest-budget days and produce classy A-films in color, the Westerns they churned out were not always quite that. Still, they weren’t all bad. Rod Cameron pictures are OK, kinda, and Rory Calhoun flicks are fine too, now and then, so put both actors in an oater, one as sheriff, one as gunslinger, and you could be onto a winner.
Or not.
.
. 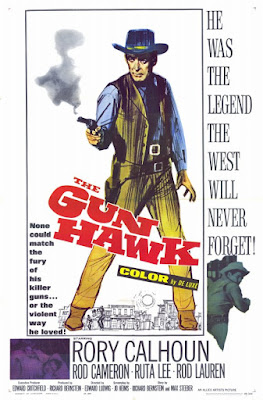 .
This one was directed by Edward Ludwig, his last film in fact. He’d been helming oaters since just after the war and moved into TV Westerns when they came along. He wasn’t John Ford. He worked with John Payne a lot, doing The Vanquished and a lot of Restless Gun, and he knew Calhoun from directing The Texan episodes. He’d done The Fighting Seabees for Republic so wasn’t a total loser. And he still has his admirers today.
The rather implausible story was by Richard Bernstein and Max Steeber (Bernstein’s only Western and Steeber’s only film), worked up into a screenplay by Jo Heims, also inexpert in the genre. It concerns tired gunfighter Blaine Madden (Calhoun) coming into Baxter, the town of Sheriff Ben Corey (Cameron). The sheriff has a young man, Reb (Rod Lauren, in his only Western apart from Law of the Lawless the following year) whom he wants as deputy but the youth isn’t interested and so wearing the badge instead is sour Morgan Woodward, who hates Madden. There’s a town drunk (John Litel) who is shot down by badman Joe Sully (perennial baddie Lane Bradford) and the drunk turns out to be Madden’s dad. So Madden hunts down Sully and his brother and murders them. But Sheriff Rod has followed him and reluctantly shoots him in the arm. This wound will turn out to be fatal.
.
. 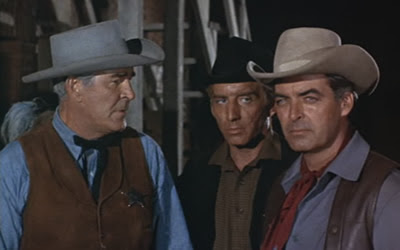 Sheriff Cameron, Deputy Woodward and gunslinger Calhoun
.
Well, Madden goes for sanctuary in a town conveniently named Sanctuary, which he seems to own. He owns the saloon anyway, which is called El Gavilan, The Hawk. There, Robert J Wilke (hooray!) is a thug who cold-bloodedly murders his partner in crime and boasts that he will outdraw Rory, but Rory, though wounded, beats him at fisticuffs and sends him packing.
Any film with Bob Wilke in it can’t be all bad.
.
. 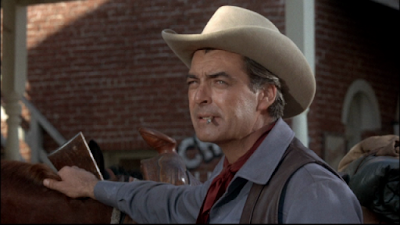 Rory on his way out
.
Of course there’s a blonde in Sanctuary (Ruta Lee) and Reb turns up there too. I won’t tell you any more – don’t want to spoil the utterly gripping suspense – but there is quite a dramatic ending, I must say. I said dramatic, not likely. Actually, Rory acts rather well as he falls ill from his wound, which he has allowed to get infected. Both Rory and Rod were graying a bit, and had added an inch or two to their girths, but it was 1963 to be fair. Furthermore, who am I to talk?
.
. 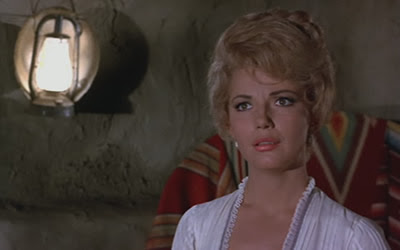 Rory’s semi-amour (but he can’t commit)
.
There are some decent Bronson Canyon locations, though most is done on sound sets. The DP was Paul Vogel, who did The Rounders, and the cinematography is perfectly competent. The color’s fine.
Look, this film is never going to be in anyone’s top ten best Westerns ever. But if you can take a Cameron/Calhoun oater now and then, you’ll be quite satisfied with this one.