You might think of The Taming of the Shrew as a 1590s rom-com. Transpose the dates a little and really give your imagination a workout and you could think of Bullwhip as a 1950s version set in the Wild West. Sadly, Adele Buffington’s name doesn’t have quite the ring to it that William Shakespeare’s did. Ms Buffington wrote Westerns with admirable dedication from 1925’s Love on the Rio Grande onward. The Cowboy and the Countess also sounds like a gripper. There wasn’t a single Western she did that was anything like an A-picture but she scribbled steadfastly on, churning out cowboy rom-coms, all though the talkie era, the 1940s and 50s. In fact Bullwhip was her last movie. I’m afraid it isn’t very good.
.
. 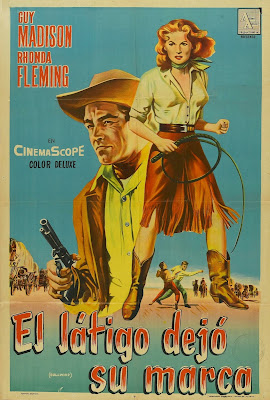 She tries whipping him but she gets whipped
.
Poor old Guy Madison was a bit on the wooden side and Western romantic comedies weren’t quite his thing. He plays it straight (probably the only mode he had). He was famous of course because of the long-running Adventures of Wild Bill Hickok on TV, which lasted most of the 1950s, but he also did big-screen Westerns such as Reprisal!, The Hard Man and The Command. He was the sensible Army captain in the Anthony Mann-directed The Last Frontier in 1955. From 1964 on he did a lot of spaghetti westerns.
.
. 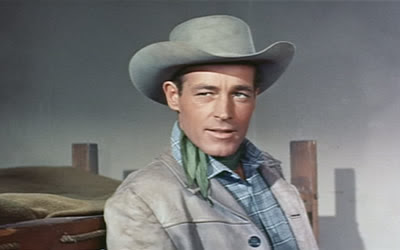 Guy Madison
.
Bullwhip has the curiously popular plot of a condemned man agreeing to marry to escape the noose (Goin’ South was a more recent example). So Guy is in jail and crooked Judge Carr (Don Beddoe, wagonloads of Westerns from Union Pacific on) hitches him up to Rhonda Fleming. Now, let me see, get hanged or marry gorgeous Rhonda Fleming? Hmm, tricky decision.
.
. 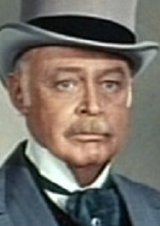 Crooked judge Don Beddoe
.
There is much complex skullduggery, which must have kept Adele toiling over a hot typewriter. But of course finally, as we knew they would, the two parties to the marriage of convenience fall for each other and live HEA.
James Griffith is the hired gunfighter who takes money from two different villains, to kill Guy and to protect him. I like Griffith. He always looked cadaverous and sinister. Guy and Rhonda both have sidekicks: Guy’s is Podo (good old Dan Sheridan, who was in every TV Western you care to name) and Rhonda’s is the Indian Pine Hawk (Burt Nelson, only three Westerns). Hank Worden is the cowboy Tex and as usual dutifully recites his lines.
.
. 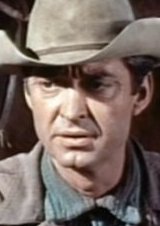 Gunslinger James Griffith
.
The whole thing was directed by Harmon Jones, who had started as an editor at Fox, but when he turned to directing wasn’t terribly distinguished. He did mostly TV shows. Allied Artists were trying to move upmarket and so this one is in CinemaScope with color by De Luxe (rather pleasant pastels, actually, a bit like Trucolor). The DP was John J Martin (the Adventures of Wild Bill Hickok cinematographer) and there is the occasional good shot, such as the early one of cowboys on a skyline with Indians moving bottom right. The wagon train under the titles is seriously impressive but it is never seen again and I guess it must have been lifted from an earlier movie.

There’s a painful ballad to start proceedings, sung by Frankie Laine, the credits say, but whose the female voice was is not revealed. Could it have been Rhonda?
All in all, though, mes chers amis, you will have missed little if you miss this film. It’s low on action and the 50s male chauvinism makes us cringe now. 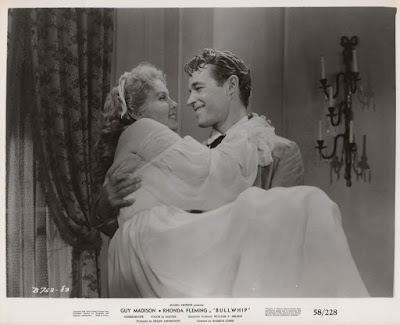 PrevPreviousBugles in the Afternoon, a novel by Ernest Haycox
NextAces ‘N’ Eights (TV, 2008)Next

PrevPreviousBugles in the Afternoon, a novel by Ernest Haycox
NextAces ‘N’ Eights (TV, 2008)Next
Jeff Arnold © 2022 – All rights reserved – Designed by BetterCallChris
Scroll Up