Bugles in the Afternoon, a novel by Ernest Haycox

My edition of Bugles in the Afternoon (University of Oklahoma Press, 2003) has a foreword by Richard Etulain and an introduction by Ernest Haycox’s son, Ernest Haycox Jr. If you want to read the novel, I suggest you get this edition. In 1989 Richard Etulain, always worth reading on anything to do with the West, wrote a biography of Haycox in the Western Writers series. Ernest Haycox Jr also wrote about his father in On a Silver Desert, published in 2003. But it is chiefly reading the original Haycox tales that one really appreciates the mastery of the man. And Bugles in the Afternoon was perhaps the summit of his achievement.

Ernest James Haycox (1899 – 1950) was a son of Oregon and he always loved the North-West. Some of his best stories are set there. He came from a poor and broken family and, his son writes, “by his 12th birthday, perhaps earlier, was on his own.” He enlisted in 1915, was stationed on the Mexican border and then was sent to Europe during the First World War. On his return, he studied journalism and began writing. 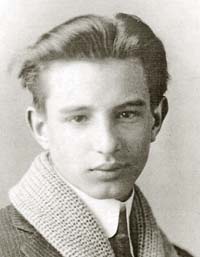 Haycox as a young man
.
.
Altogether he wrote two dozen novels and about 300 short stories, some about his early interest, the American Revolution, but mostly Western tales. In the 1920s, 30s and 40s he was a leading contributor to top magazines and papers like Collier’s Weekly and The Saturday Evening Post. Admirers included Ernest Hemingway and Gertude Stein, and Hemingway once wrote, “I read The Saturday Evening Post whenever it has a serial by Ernest Haycox.”
Haycox really became famous in 1939 because that was the year in which John Ford adapted his short story Stage to Lordsburg into one of the best known Western movies ever, Stagecoach.
.
. 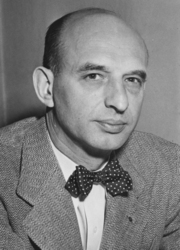 Haycox in his prime. He died sadly young of cancer at 51.
.
Bugles in the Afternoon first appeared in The Saturday Evening Post (unaccountably, Collier’s rejected it) as a serial in 1943 and was published as a full novel the year after.
Haycox had ambitions, largely achieved, to elevate the pulp Western story into American literature. Certainly he had a wide and deep knowledge of the West, and he managed to apply that without being didactic; he wore his learning lightly. Bugles is a Custer story and you get a really interesting picture of life in the 7th Cavalry by reading it. The hero, Kern Shafter, is with Reno’s command. Haycox had always been interested in Custer and had an extensive library of primary and secondary sources on the general (now in the University of Oregon library). He also interviewed many elderly participants in the Indian wars. He knew whereof he wrote.
(Although his interviewees weren’t all totally reliable. His son tells of one, a filthy tramp who spoke only in verse and said he was the Lone Ranger’s brother).
But he also developed a literary style that combined elegance with pithiness and thoughtful observations, and his characters are convincing and interesting. It is no wonder Hemingway admired him.
.
. 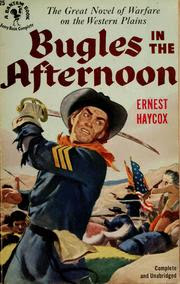 Haycox wouldn’t have approved of the cover. The sabers were left boxed at Fort Lincoln.
.
You really have to put the 1952 movie (see separate review) made from this novel out of your mind when you read the book. The film was stodgy, plodding and miscast. The book, however, is magnificent.
Haycox’s Custer is very convincing: a charismatic but flawed figure. His principal faults are arrogance and over-confidence. Haycox writes that Custer
scorned the cautions which held other commanders back; he had a blind faith in the naked power of a cavalry charge. On dash and surprise and swiftness he had made himself a general out of a boy lieutenant in four years and he would not change now.
Haycox underlines that this rashness and self-belief would have been acceptable if it had led only to his own demise. But more than 250 white American men and their families were to suffer the terrible consequences.
He was a simple man so hungry for greatness that he could ride roughshod over the personal feelings of other men and not be aware of it; he was so naïve in his judgments that even as he knew his enemies, he treated them in a manner of one who knows them to be entirely wrong and therefore to be treated charitably. … All these things he was – an elemental complex of emotions and hungers and dreams never cooled, nor disciplined, never refined by maturity; for he had never grown up.
There is a ‘small’ but powerful personal tale within the broader historical picture of the campaign. The story opens with Kern Shafter, a classic Western hero, traveling by stage and train to Bismarck and meeting, on the journey, the beautiful and lively Josephine, whom he protects from the dangers and coarseness of rough Western men. We learn that he was a lieutenant, cashiered from the Army after a quarrel with a senior officer over a woman. He now re-enlists as a private in the 7th. Here he finds that the officer with whom he had fought, the dastardly Captain Garnett, is also at Fort Lincoln and, worse, has set his cap at Josephine (among other ladies). This then is the heart of the plot.
Particularly gripping are the account of Shafter’s winter journey by sleigh on the mail trip to Fargo, when he is caught in a blizzard, and the attack of Company A under Major Reno by the Sioux. The book therefore carries you along, turning the pages.
Bugles did very well commercially. It received critical acclaim and sold strongly, more than any other Haycox novel. Many still regard it as the best novel about Custer.
As Richard Etulain writes, “Bugles in the Afternoon remains Ernest Haycox’s best novel … More than half a century after its first appearance, the work maintains its strong appeal as a smoothly written historical Western about Gen. George Custer.”
.
.
I concur. I love the ‘superior pulp’ Western novels of Luke Short and Glendon Swarthout, and the nostalgic old-West feel of Jack Schaefer, and the sweeping epics of McMurtry, and the gritty frontier tales of Elmore Leonard, and the comic genius of Charles Portis and Thomas Berger, and the intense literary works of Cormac McCarthy, but do you know, I have a sneaking suspicion that Ernest Haycox may be the best of them all.
.
PrevPreviousCaptain Apache (Scotia International, 1971)
NextBullwhip (AA, 1958)Next