.
Junk, of course, but ever so slightly better than most spaghettis
.

While still very bad and onot really worth watching, Captain Apache is perhaps at the more salubrious end of the swamp of searing dreadfulness which usually spawns spaghetti Westerns. I say this because while it has the hallmarks of spaghetti (an amusing metaphor), i.e. lousy acting, worse sets, appalling writing, bad photography, awful music, dire dubbing and so on, it is at least slightly more American than some Eurowesterns were.
.
. 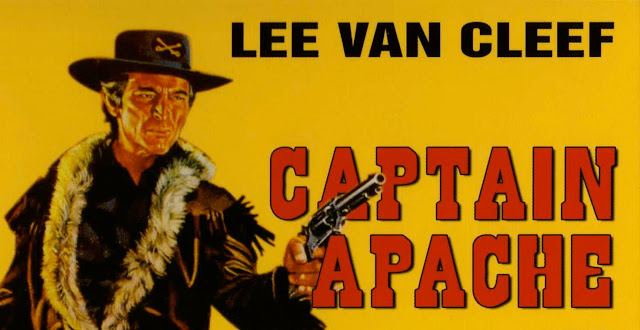 Lee in full spaghetti mode, early 1970s
.
The director was American for one thing, even if very much from the second tier (New Yorker Alexander Singer, TV Western director) and amazingly, astonishingly, jaw-droppingly, one of the writers was not only American but also good – Philip Yordan. Yordan, you doubtless know, wrote or co-wrote Westerns of the caliber of The Man from Laramie, Johnny Guitar, Broken Lance and The Bravados. What on earth was he doing bashing this trash out on his typewriter? But then I suppose that question could be put to many of the people involved with the movie.
And there are a couple of aspects which stir a modicum of interest in it. For example, the bad guy is Stuart Whitman, in early-70s hair and a frock coat, a gun runner to the Indians, or is it the Mexicans, I forget, or I may have been asleep. And with Whitman is British B-movie actor Percy Herbert, so we have a sort of Cimarron Strip reunion, with Marshal Crown and deputy McGregor roaming thru Arizona, Spain. However, this time Percy has lost his cod Scottish accent in favor of an even less convincing ‘American’ one.
.
. 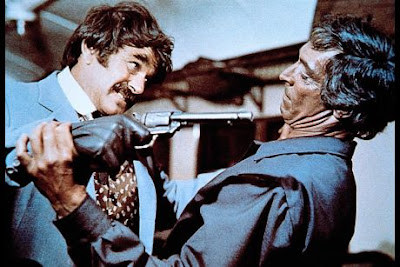 .
Far from the Cimarron Strip, Stuart Whitman is the bad guy,
while (below) Percy Herbert is not McGregor but Moon
.

.
The star is Lee Van Cleef, so that’s good. He plays an Apache who has become a captain in the Union Army. All the whites refer to him as “red ass”, not a term I was familiar with. The Apache don’t like him either, though, seeing him as a renegade who has sold out to the enemy. He is obliged, when going to meet the chief Diablo (Vito Salier), to strip off and negotiate wearing nothing but a Tarzan loincloth. Actually, though, in his make-up Lee did look just a little Native American, with that gaunt face and all. His other costume is hilarious, a sort of slinky leather jacket with feather boa collar.
.
. 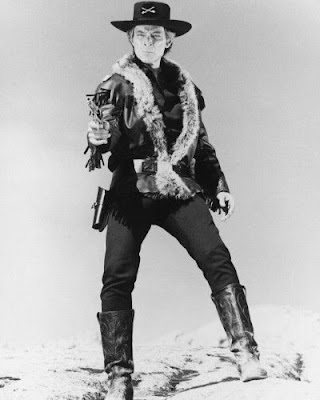 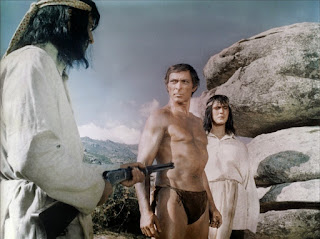 Hardly a costume at all
.
And there’s a third good thing: it’s a two-derringer picture. Besuited badguy Stuart Whitman has one, appropriately, one of those sleeve types that dashes the popgun into your hand, and one of the dames, I forget which (Carroll Baker or Elisa Montés) also uses one. You know how besotted I am with derringers.
.
. 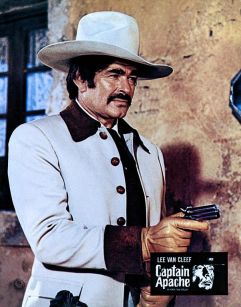 Derringer!
.
So it isn’t all bad.
Just most of it.
Yordan based his screenplay on “a novel by SE Whitman”. Do you think that was Stuart? He was actually SM Whitman. Still, …
There’s a trendy LSD sequence where Lee goes on a trip. Psychedelic, man.
The worst/funniest thing about the picture is Lee’s embryonic 1970s rap at the start, where he recites doggerel to electric guitar backing, and then he actually ‘sings’ (flat) at the end. Singers often tried acting in Westerns and with very few exceptions (Johnny Cash quite good in A Gunfight, Dean Martin wonderful in everything, even though many of his films were junk, Elvis very good in Flaming Star) they were pretty hopeless at acting and they should have stuck to singing. Similarly, actors who try singing really should have thought again. Think of Robert Mitchum in Young Billy Young. Oh dear. I make an exception for Chill Wills; he had a nice voice.
You can safely skip this movie, though. Unless you have a morbid interest.

PrevPreviousSeminole Uprising (Columbia, 1955)
NextBugles in the Afternoon, a novel by Ernest HaycoxNext
Jeff Arnold © 2022 – All rights reserved – Designed by BetterCallChris
Scroll Up