Broderick Crawford was always unsuited to Westerns, I think. He liked them, and made a lot (this was the ninth of fifteen), more’s the pity. But his girth and quick-talking Eastern gabble, more suitable to a gangster or tough cop than a Westerner, made him faintly ridiculous in the saddle. (I make an exception for The Last Posse, in which I think he was very good). Here, he is an Army sergeant who takes command of a small troop after the destruction of the town of Little Buttes and the slaughter of its inhabitants by Comanche chief Black Cloud.
.
. 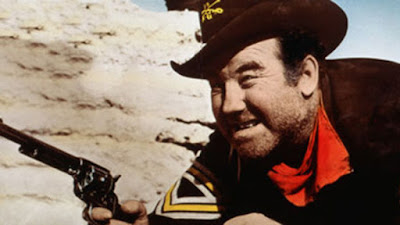 Far from Highway Patrol
.
.
Last of the Comanches (known in Europe as The Sabre and the Arrow) is a classic 50s Columbia mid-budgetWestern, nicely photographed by Charles Lawton Jr and Ray Cory in Technicolor in Old Tucson, AZ locations. But the writing is pretty clichéd and plodding. The screenplay was by Kenneth Gamet, who worked on the scripts of quite a few Randolph Scott Westerns, such as Coroner Creek (which was very good), Man in the Saddle, Santa Fe and several others, but who also did a lot of lower-budget and TV Westerns (Casey Jones in particular) of not very high quality. The story concerns the survivors led by Brod, struggling across the desert without water. They meet up with the stage, which obviously (for they had all seen Stagecoach) has a woman and a whiskey drummer on board and a crusty old driver (George Mathews). They take pity on a Kiowa boy (the not-very-Kiowa Brooklyn-born Johnny Stewart) and he leads them to a ruined mission with a well, and there they have to fend off Black Cloud’s attacks.
.
. 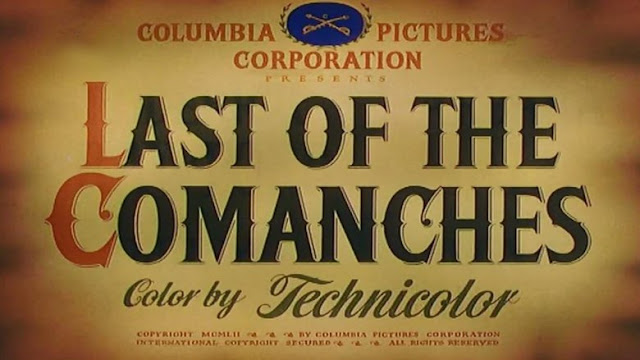 A bit of a plodder
.
The cowardly liquor salesman is Chubby Johnson, so that’s good, and the dame, the colonel’s daughter of course, is Barbara Hale, in the third of her eleven oaters. She is quite decorative but the script is so conventional that she had little opportunity to shine. Talking of shines, she takes one to Brod, a rather unlikely if inevitable romance. It’s all very chaste, of course, though Freud might have had a field day with her suggestive unbuttoning of his flap. But it’s only the holster flap.
.
. 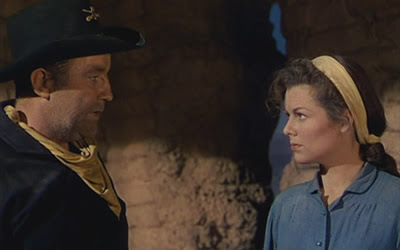 A rather improbable romance
.
Lloyd Bridges is rather wasted in a minor part as a trooper. Other troopers are the obligatory Irishman (Mickey Shaughnessy in his film debut) and Mexican-American (Ric Roman). They meet a dubious character in the desert (Hugh Sanders) and you guess within 3.5 seconds that he is the gun-runner supplying new Henry rifles to the Indians (the worst crime any character in a Western could commit). It isn’t exactly suspenseful.
They send the young Kiowa boy off to get help and he battles bravely through. You know the US Cavalry will appear to save them at the last minute, and they duly do.
.
. 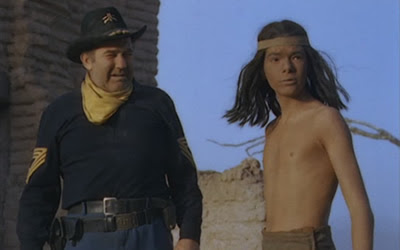 Kiowa boy saves them
.
But not before various members of the outfit (though not of course Brod or Barbara) are picked off, one by one.
The Indians are just cardboard-cut-out savages (in fact the intro screen text talks of “Black Cloud and his savage followers”) and there is no trace of post-Broken Arrow pro-Indian sentiment. Apparently Jay Silverheels was – uncredited – in their ranks but I didn’t spot him.
The whole farrago was directed by André De Toth. It’s an odd thing about De Toth, he loved Westerns and made some really good ones, but he also churned out some real clunkers. Dashing in his film director’s eyepatch (like Raoul Walsh but unlike John Ford and other patch wearers, he only had one eye), Austro-Hungarian De Toth had been an actor, then writer, editor and director in Europe. He fled to England when war broke out and worked under Alexander Korda. He came to the US in 1942 and was fêted as a top-drawer film maker of an intellectual kind but he reveled in hard-boiled American crime pictures, and he loved Westerns.
.
. 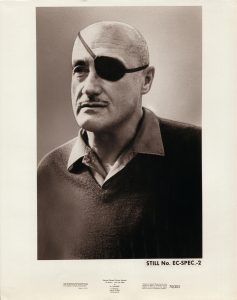 The movie was a Western remake of the Zoltan Korda-directed Humphrey Bogart war film Sahara. Really, you’d be better off with the original. Well, no, you wouldn’t, what am I saying, of course you wouldn’t, this is a Western. 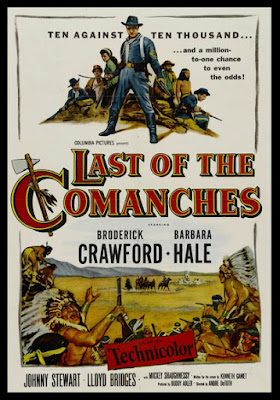 Slogan a bit misleading
.
It’s historical hokum: there was no Black Cloud and no 1876 massacre by Comanches (they had surrendered peacefully under Quanah Parker in ’75). Still, we don’t watch Western movies for history lessons.
The makers didn’t quite live up to the poster slogan ‘ten against ten thousand’; budget constraints must have intervened. But ‘ten against a hundred’ doesn’t sound quite so dramatic on a poster. The funniest bit is when Brod parleys with Black Cloud (John War Eagle) and speaks gangster slang like a machine-gun at him. Amazingly, Mr Cloud seems to understand and replies.