.
A fine film
.
.
In 1993 there were two films about Geronimo. One was a TV movie screened by TNT, Geronimo, and it wasn’t at all bad (see our review). It looked at the story from a more Apache perspective, which was refreshing. Jimmy Herman was especially convincing, I thought, as the old Geronimo. There were weaknesses: Geronimo is shown as a strategic general, disposing ‘his’ troops and giving commands as to when and where to attack. Apache warfare was more individualistic than that and Geronimo seems to have had a more advisory role. The Indians are all very well washed and have Daz-white clothes, gleaming teeth and very clean hair. I also think that Geronimo’s role as a medicine man and prophesier is underplayed, to make him ‘only’ a warrior. And the Indians speak English, not Apache.
The other offering, a big-screen version from Columbia entitled Geronimo: An American Legend, rectified several of these shortcomings. The Apaches speak Apache (with subtitles), and the actors (who, though of Native American descent, are not Apache) must have studied hard with a dialogue coach. They look more authentic in their costumes and some of the faces look more Apache too. Goyaałé (to give Geronimo his real name) has visions, for example seeing the train that will carry them to Florida. And he is less of a general in the white sense.
.
. 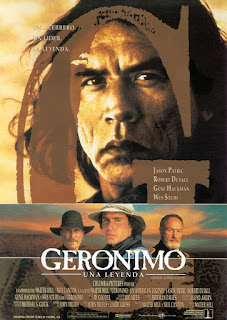 The best ever film on Geronimo
.
The Columbia film was produced and directed by Walter Hill. Now I have a lot of time for Mr Hill. He once said that he considers all his films as Westerns. Certainly when you watch a movie like Last Man Standing you can’t disagree with that. There is a story that John Wayne wanted him to direct The Shootist but such was Hill’s admiration for Duke, he did not want to direct a film in which he died. Don’t know if that’s true or not. Considering all, he has not directed that many Westerns (though it rather depends on your definition of the genre), you might say four (The Long Riders, Geronimo, Wild Bill and the made-for-TV Broken Trail) and an episode of HBO’s Deadwood. But they are probably the best ever films about Jesse James (well, except The Assassination…), Geronimo and Hickok. They do play about with history but as I have often said, we don’t watch Western movies for a history lesson. They are fiction or fantasy. That’s OK.
.
. 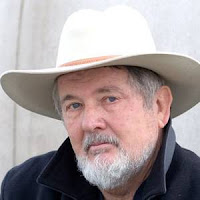 Walter Hill
.
Geronimo was written by John Milius, a favorite collaborator of Hill. Mr Milius is a Conservative (let’s say) and a gun enthusiast who quotes his favorite film as Red River, and wrote Jeremiah Johnson and The Life and Times of Judge Roy Bean, as well as another Walter Hill movie, Extreme Prejudice, a Western in some ways.
.
.
. 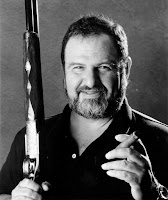 He does well on the screenplay of Geronimo, and manages to capture the cadences and language of the characters, especially, I thought, the parts of Goyaałé and Al Sieber. I don’t know why he had to kill Sieber (he has him shot to death in a saloon brawl); that didn’t happen and I am not sure it was dramatically necessary or useful. And yes, he does monkey about with the historical facts in other ways too but name me a Western that doesn’t.

The movie was beautifully shot by Lloyd Ahern in Moab, Utah locations. It is glorious in red, yellow and orange, with sweeping vistas and sometimes terrain as barren and pitiless as the violent conflicts that took place there. Mr Ahern started as assistant cameraman on Rawhide on TV in the 1960s and worked on The Big Valley and some Gunsmoke episodes, so was not known as a big-screen Western DP but with Hill he worked on Geronimo, Wild Bill, Broken Trail and the Deadwood episode, and did a great job on all of them.
Ry Cooder was in charge of the music. I love all Ry Cooder’s work so I was happy about that. The music is quite understated in fact but none the worse for that.
As for the acting, it’s pretty good. Gene Hackman is General Crook, played as a sage and sympathetic friend of the Apache. Mr Hackman was in some disgraceful Western junk like The Quick and the Dead ($$$, I suppose) but he also did some good Western work too, notably of course his outstanding Little Bill Daggett in Unforgiven. Here he interprets the bearded Crook with authority and conviction.
.
.

General George Crook (1830 – 1890) and Gene Hackman
.
Matt Damon is the green and idealistic young 2nd Lieutenant Britton Davis who narrates the story. It was the now-very-famous Mr Damon’s first Western, he was only 23 and he managed to look boyish and innocent; he suits the part well. He was also pretty good as a slightly more grizzled Texan in the Glenn Campbell part in the Coen brothers’ True Grit, I thought, but he hasn’t done many Westerns. All The Pretty Horses was not a success, reducing the fine book to a slushy love story.
.
. 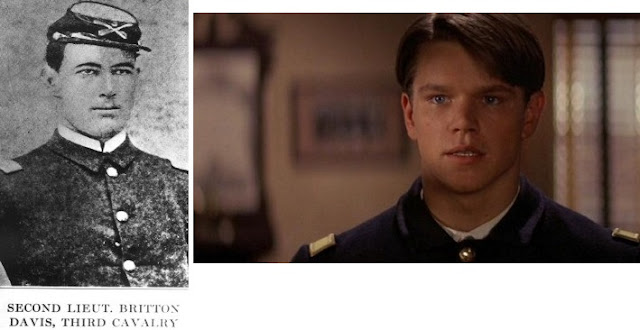 Lt. Britton Davis and Matt Damon
.
In fact Britton Davis (son of the Reconstruction governor of Texas) was a very interesting person. Not quite perhaps as naïve and green as in the film, he was one of the few (Gatewood was another) who saw the plight of the Apaches for what it was. In 1929, living in San Diego, he became so annoyed by the claims of the military to have ‘captured’ Geronimo (of course he was never captured) and by Hollywood movies recounting absurdities, that he wrote a book, The Truth About Geronimo (still available), to set the record straight. He wrote:
In my talks with the Indians they showed no resentment of the way they had been treated in the past; only wonderment at the why of it. Why had they been shifted from reservation to reservation; told to farm and had their crops destroyed; assured that the Government would ration them, then left to half starve; herded in the hot, malarial river bottoms of the Gila and San Carlos, when they were mountain people? These and other questions I could not answer. And above all they wondered if they would now be allowed to live at peace. Poor devils! Their fears were realized. In two years they were in prisons in Florida; four hundred innocent people, men, women, and children, who had kept the faith with us, punished for the guilt of barely one-fourth who had been lied to and frightened into leaving the Reservation by Geronimo, Chihuahua, and two or three other malcontents.
We have heard much talk of the treachery of the Indian. In treachery, broken pledges on the part of high officials, lies, thievery, slaughter of defenseless women and children, and every crime in the catalogue of man’s inhumanity to man the Indian was a mere amateur compared to the “noble white man.” His crimes were retail, ours wholesale. We learned his methods and with our superior intelligence, improved upon them…
Charles Gatewood is played in the movie by Jason Patric. Gatewood appears a much more experienced hand who teaches Davis about the Apaches, has a rapport with Geronimo, wins a single-combat duel with an Apache warrior (with some spectacular riding) and orchestrates a blazing (but fictional) shoot-out with some bounty hunters in a saloon – a classic Walter Hill moment and good Western action, if a bit out of place in the story. Mr Patric is perhaps better known in action movies like Speed 2 but he has done two Westerns, this one and the 2004 The Alamo, in which he was Bowie; this year he was in a short, The Weight of Blood and Bones, and, announced for 2019, he is scheduled to be Duane in another remake of The Last of the Duanes, a Zane Grey tale.
.
. 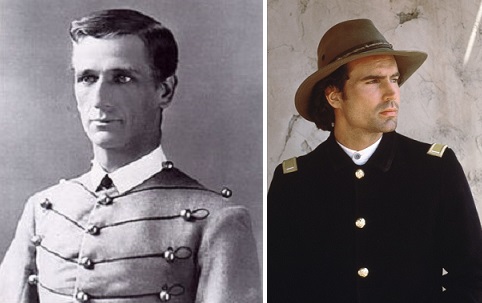 Lt. Charles Gatewood (1853 – 1896) and Jason Patric
.
The real Gatewood was treated disgracefully. Shifty politician General Nelson A Miles, Crook’s replacement, wanted none of Crook’s men around him and certainly not one who would remind everyone of how he had brought Geronimo in peacefully and how promises to Geronimo were shamefully broken. Nominated for but denied the Medal of Honor, Gatewood was sent to a remote Wyoming posting, was badly injured in the Johnson County War, retired from the Army in 1896 and died of stomach cancer the year after.
The third of Crook’s trio of Geronimo-chasers was Al Sieber. This Al Sieber is Robert Duvall, and Bob plays Al just as he played Gus in Lonesome Dove, Boss in Open Tange and Prentice in Broken Trail, with many a “yessir” and “nossir” tacked on to the end of his wily old words of wisdom. There is no trace of the strong German accent the real Al had. Of course the real Al did not take part in the Gatewood/Davis final expedition to find Geronimo and persuade him to surrender at all. Nor was he shot and wounded by Geronimo. And he certainly was not shot to death in a Mexican cantina in a fight with bounty hunters. But hey, you want history? Read a history book. Duvall is one of the best screen Siebers, at least the equal of John McIntire (in Apache) and Richard Widmark (in Mr Horn).
.
. 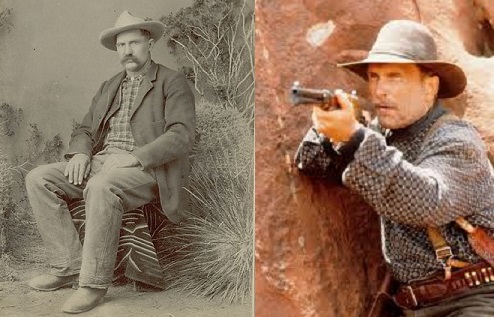 Al Sieber (1843 – 1907) and Robert Duvall
.
The real hero of the picture (it is named for him, after all) is Wes Studi as Geronimo. I think he’s very good indeed. He manages to look bitter and sour throughout, and Geronimo undoubtedly was (probably had reason to be). Through into the early 1900s he was a poisonous old man, disliked and distrusted by his own people as well as the whites, and a man who did not keep his word. But in this film he is almost admirable, and you are more than half on his side. The two 1993 Geronimo movies were valuable correctives in this sense, after generations of stories of Geronimo as the one who would not listen to the wise and statesmanlike chiefs who made peace with the White Eyes but rather favored the warpath and brought death and destruction. He did bring death and destruction, of course, but not as much as the Anglos and Mexicans wrought on the Apaches.
.
. 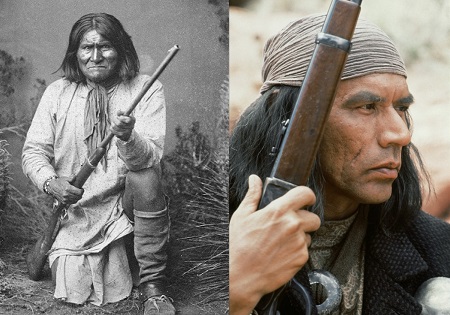 Goyaałé or Geronimo (1829 – 1929) and Wes Studi
.
Mr Studi had been one of the stars of Dances with Wolves in 1990 and had been Magua in The Last of the Mphicans in 1992, and in both he was excellent. I liked his Famous Shoes in Streets of Laredo in 1995 and more recently his Buffalo Hump in Comanche Moon. He was Wovoka/Jack Wilson in HBO’s Bury My Heart at Wounded Knee. He really is a strong and convincing actor, and his Goyaałé is one of the highlights of the Walter Hill picture.
Other famous Apaches appear, such as Dandy Jim (Michael Minjarez), Bronco Apache (Juddson Keith Linn), Mangas (Rodney A Grant), Chato (Steve Reevis) and Ulzana (Victor Aaron). Tom Horn isn’t there, however, which was a pity; I suppose Duvall’s Sieber filled the scout role. CS Fly (Jonathan Ward) comes in from Tombstone, to photograph the meeting (which Fly did). Kevin Tighe makes a sly and unscrupulous Nelson A Miles.
A very good film. Recommended.

PrevPreviousLast of the Comanches (Columbia, 1953)
NextAl Sieber in fact and fiction. Part 2/2: the fiction.Next
Jeff Arnold © 2023 – All rights reserved – Designed by BetterCallChris
Scroll Up