.
A travesty of Annie Oakley
.

I dislike Annie Get Your Gun not because it’s an bad film (though it is), nor because Betty Hutton as Annie roars out her songs like a wounded heifer (though she does), nor even because there isn’t a comma in the title (because it needs one) but because the basic picture of Annie Oakley is completely false. Hutton, taking the role Ethel Merman had in the Broadway show, plays her as a hillbilly tomboy, a sort of sharpshootin’ Doris Day-style Calamity Jane, and it’s quite wrong. Oakley was a demure, proper person who skillfully projected a persona of “little miss”, even as a married woman in her thirties, but she was never less than a Victorian lady in all matters of propriety and dress.
.
. 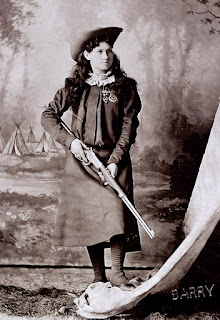 The real Annie with her gun
.
It is true that I am biased. I don’t care for musicals at all. I find them inherently silly and don’t like the style of music (though I love opera and have no problem with musical drama as such). But these tawdry Hollywood versions of garish Broadway shows are painful. I only watched it because of its vaguely Western subject matter, out of duty.
.
. 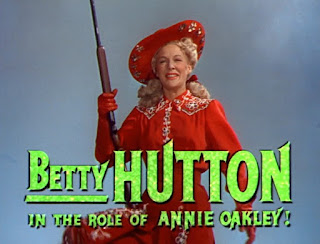 Doris Day, Judy Garland, Ginger Rogers were all considered
.
The love of Oakley’s life was the marksman Frank Butler (1847 – 1926), who fell for her when she beat him in a shooting contest, invited her into his show and soon gave her all the limelight. They were married and worked in variety together for years before joining Buffalo Bill’s Wild West. In the musical, they join Cody right away. Butler (Howard Keel) is a flashy Tom Mix-style dude cowboy who takes umbrage when bested by the young girl and goes off in a huff to join Pawnee Bill’s show. He and Annie love each other but are kept apart for most of the movie and Annie goes to Europe alone. There is no sign of Annie’s rival Lillian Smith either; Annie gets all the glory and meets all the crowned heads.
.
. 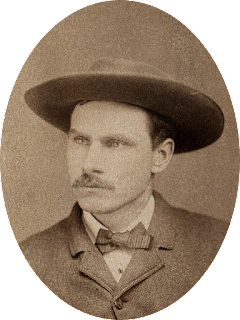 Frank Butler
.
Louis Calhern is Buffalo Bill. As a singer, he makes a great actor. (The others can sing but not act). Calhern looked the part; he was tall, distinguished and aristocratic-looking. It was to have been Frank Morgan but Morgan died just as filming began. Calhern was in fact in a proper Western as well as this junk: he had second billing in the excellent Anthony Mann-directed Devil’s Doorway the same year. he is really the best thing about Annie Get Your Gun.
.
. 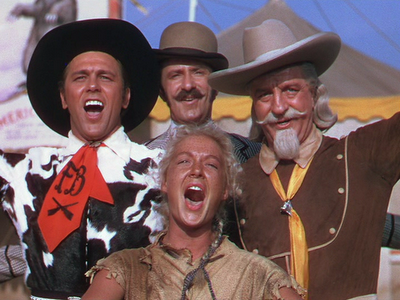 Yes, well, if you like that sort of thing…
.
The Indians are portrayed offensively, in a 1950 ‘comic’ way. They are greedy and coarse. Sitting Bull (J Carrol Naish) introduces himself with an “Ug”. He provides the money for the show, investing revenue from oilwells he has (I know, but that is the least of the sillinesses of the storyline).
.
. 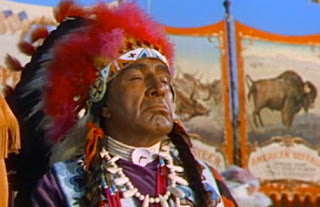 A non-comic Sitting Bull
.
Buffalo Bill’s manager, a principal part, is one Charlie Davenport (a fictional character, but then they all are) played by Kennan Wynn. He tells Bill that despite the European tour the show is broke. They hatch a plot to merge with Pawnee Bill’s show to pay their debts, not knowing that Pawnee Bill (Edward Arnold) is broke too and wants to merge to get his hands on Buffalo Bill’s supposed wealth. Or something. The plot is too daft to recount further. This business does at least give rise to one of the few good lines in the screenplay (by Sidney Sheldon and Herbert and Dorothy Fields) when the mutual impecuniousness is discovered and someone says, “They haven’t got as much money as we haven’t got.”
.
. 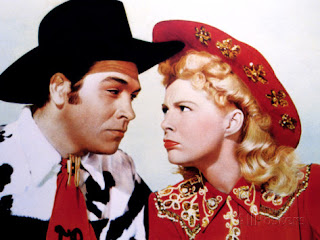 Butler & Oakley, Hollywood-Broadway style
.
For a big-budget musical there is surprisingly little spectacle in the Wild West show, the ‘biggest’ scenes being one where Annie saves the Deadwood stage by shooting Indians (she didn’t) and the finale as riders surround the happy couple.
.
. 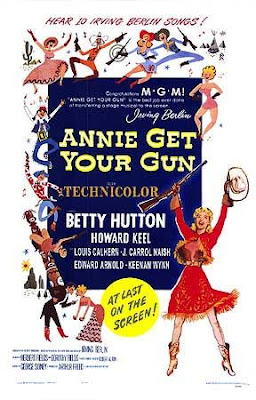 Yawn
.
You may like this movie if you like colorful musicals. It has at least There’s no business like show business and Anything you can do in it. With Irving Berlin (replacing Jerome Kern) and Rodgers and Hammerstein involved (and Busby Berkeley directed quite a few scenes but they were excised or reshot) it couldn’t be all bad, but it could be mostly bad, and it was. As a Western, of course, it’s nowhere, but you can’t fairly blame it for that (though I do).