The Texans was the last film Randolph Scott made under his Paramount contract. The studio finally gave him an A-Western, a big-budget effort along the lines of its The Plainsman (1936) or Wells Fargo (1937) but it was too late. He had negotiated a series of movies as a freelance with various other big studios, and it was Paramount’s loss. They had underused him.
.
. 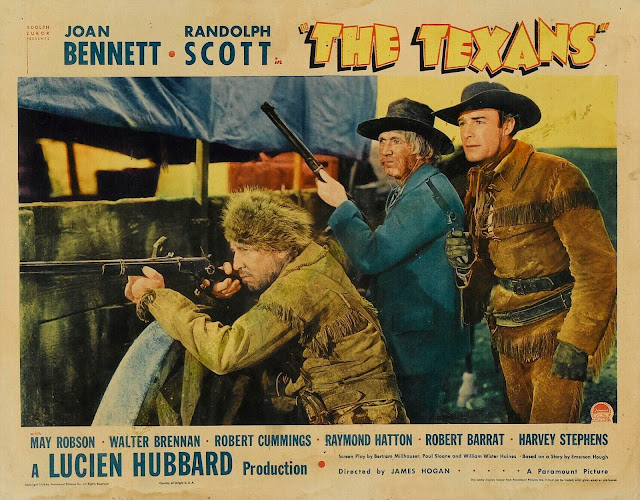 Ray Hatton, Walter Brennan and Randy hold off the Comanches
.
The Texans is not as big-budget as The Plainsman (a Cecil B DeMille pot-boiler/farrago but with a perfectly splendid Gary Cooper) but it’s still quite enjoyable. It’s a big black & white actioner, shot on location in Texas by Theodor Sparkuhl – not a Western specialist but he had been DP on Wells Fargo the year before. It’s a remake of Paramount’s silent North of 36 of 1924.
The cast was good. Joan Bennett got top billing, not Randy. Bennett had starred with Ronald Colman on Paramount’s Bulldog Drummond films and she was popular with both audiences and critics. This was, however, her only Western. She’s pretty but unconvincing. Scott himself is overly made-up, in a 1930s way, and has frizzy hair. He shows little of the subtlety or acting ability of which he was capable, and this isn’t really one of his better efforts, though he is probably the best actor on the set.
.
. 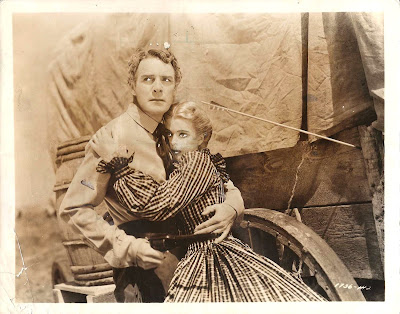 Rather old-fashioned for 1938
.
Walter Brennan, only in his forties but already playing Gabby Hayes-esque cranky old-timer parts, is the ranch foreman Chukawalla in a wig who goes on the cattle drive, ten years before doing the same with John Wayne in Red River. Brennan was in over 100 Westerns, from the silent The Calgary Stampede in 1925 to Smoke in the Wind in 1975, was always enjoyable – and was a better actor than some gave him credit for. Dependable standby Raymond Hatton plays Randy’s sidekick Cal Tuttle, trapper in a coonskin cap, who detests company. He is dry and actually quite amusing. I must do a post on Ray Hatton one day: one half of an early comedy team with Wallace Beery, he was in many silent Westerns all through the 20s, then was very well known as the tobacco-chewing Rusty Joslin in the Three Mesquiteers series. He was also Johnny Mack Brown’s sidekick. He was a key presence in the world of the Western. Good old Francis Ford, elder brother of director John, is, unusually, billed above the line as the colorful Uncle Dud. It was the 203rd of his 250 Westerns, in a career which went from 1910 to 1953. Chris-Pin Martin is a cowhand in a big sombrero.
.
.
It’s a Reconstruction era story. The majority of Hollywood Westerns were heavily slanted in favor of the Union when it came to the Civil War but quite a few were strongly anti-Reconstruction. This one opens with screen text telling us that “The South was ruled as a conquered enemy. Northern politicians wallowed in an orgy of power – of plunder … of tribute and tyranny and death.” Randolph Scott, son of Virginia that he was, himself toed this line: he would make Thunder over the Plains with André De Toth in 1953 which also portrayed the period entirely negatively. The Texans is set in Indianola, Texas in 1865 and opens with a swaggering drunken African-American soldier on the sidewalk and a white man in Confederate uniform snarling, “Look, white men stevedoring” as whites do ‘Negro’ work of heavy lifting. As in Thunder over the Plains, all the Northerners are crooked and/or drunken carpetbaggers. Their leader is the slimy Isaiah Middlebrack (the names are quite enjoyable in this movie) played by Robert Barrat. Barrat, a pal of James Cagney’s, did plummy-voiced lawyers and historical figures at a rate of 20 pictures a year. He’d also been Chingachgook in Randy’s first really big hit, his 1936 Last of the Mohicans.
.
.
.
. 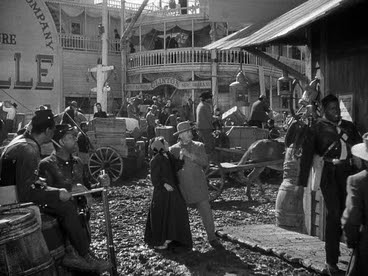 Decent (white) townsfolk beset by swaggering Negroes. Shocking.
.
There’s a picaresque plot of ex-Rebels trying to resuscitate Confederate fortunes after Appomattox. Joan Bennett is running guns for Shelby’s pro-Maximilian campaign and the idea is that Mexicans and French will, in return, cross the border and fight alongside the South in a new war. Hero Kirk Jordan (Scott) doesn’t approve. He wants to reunite the states in a union of fact and spirit. But the movie quickly becomes a cattle-drive picture as Randy convinces Bennett to drive her herd up the Chisholm Trail in order to avoid the evil Northern cattle tax which would cost $10,000. They head for Abilene.
.
. 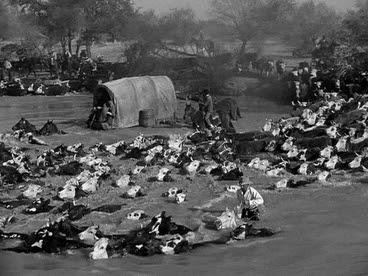 Cattle drive
.
There are Indians (was that a young Jay Silverheels as leader of a Comanche band? Not sure). They set a prairie fire and what with the regulation stampede and a blizzard and a dust storm and the big herd, it’s all quite spectacular. John Qualen has a one-line part as a Mischa Auer-type Swede in Abilene: he says that the cattle go m-m-moo. Randy saves Abilene and the Kansas Pacific (both were on the point of giving up), and announces to the annoying heroine, “I love you, confound you.” He, Ray and she in her frilly finery go off to do a spot of trapping. Plausible it ain’t.
.
. 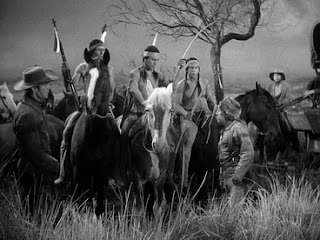 Ray parlays with the Comanches
.
The Texans didn’t have a top director. James P Hogan was a Paramount go-to for B-movies; he had directed their popular Bulldog Drummond pictures. He had been doing oaters since 1928 and did quite a few Buster Crabbe pictures in the 30s. But he did a reasonable job on The Texans, which, though verging on the second-rate, does at least rattle along nicely and makes some (very modest) attempt at character development. 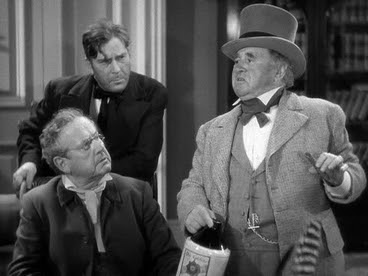 Drunken and crooked politicians in charge. So what’s new?
.
The writing (Bertram Millhauser, Paul Sloane and William Wister Haines) is a bit on the clunky side and seems very dated to us now. There are racist references that were perhaps acceptable in 1938 but certainly don’t pass muster when viewed by present-day audiences, such as when the heroine sings some ‘darkie songs’ to entertain her dinner guests. There are also too many comic or semi-comic characters and as a Western the picture lacks grit. May Robson as the Southern grandma is quite entertaining but what with Ray Hatton and Walter Brennan as amusing types, not to mention the drunken carpetbaggers, it’s all too light.
You could skip seeing The Texans and you wouldn’t have missed a great landmark of the Western genre. But you could also pass a reasonably enjoyable 92 minutes in its company, and no Randolph Scott Western is to be discarded without a care.

PrevPreviousAnnie Get Your Gun (MGM, 1950)
NextHeritage of the Desert (Paramount, 1932)Next

PrevPreviousAnnie Get Your Gun (MGM, 1950)
NextHeritage of the Desert (Paramount, 1932)Next
Jeff Arnold © 2022 – All rights reserved – Designed by BetterCallChris
Scroll Up