Clair Huffaker wrote Western novels and screenplays, sometimes screenplays from his own novels, as in this case. They were competent and workmanlike and occasionally excellent. Some of them were quite big and famous – The Comancheros or The War Wagon, for example, both with John Wayne,
and some were entertaining and exciting, like 100 Rifles or Rio Conchos. Flaming Star was outstanding. In Seven Ways from Sundown he gives us an enjoyable story for Audie Murphy to star in.
.
. 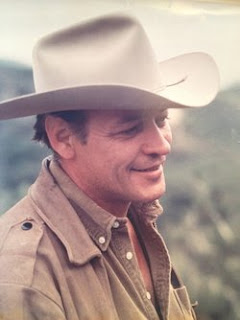 C’est Clair
.
Almost more than an Audie Western (his 20th), this is a Barry Sullivan vehicle. While Murphy plays the straight-and-narrow Texas Ranger determined to bring him in, it’s Barry who plays the charismatic charming rogue who is the object of the hunt, and it is he who steals the picture.
.
. 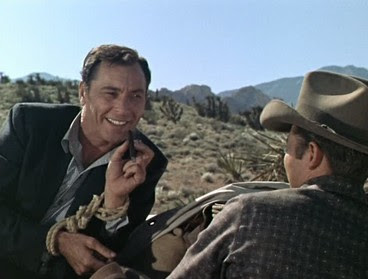 Barry stealing the show
.
It’s the story of frock-coated outlaw Jim Flood, who has a splendid entrance in the first scene, escaping from a saloon and his pursuers. It is Sullivan, of course. This was the year that he became Pat Garrett on TV, in The Tall Man (he was tall actually, though not as vertiginous as Garrett) and he’d been in big-screen Westerns since 1943. He was (a very fictional) Tom Horn in 1949 in Bad Men of Tombstone and he’d been an Earpish marshal in Forty Guns in ’57. He had another charming-rogue part in Dragoon Wells Massacre that year too, and he was a regular on various Western TV shows. Seven Ways from Sundown is one of his better oaters.
You can tell Flood is a good-badman because at one point he is nice to a kid and gives him a knife. If you see a character mistreating an animal or child, especially in the first reel, that’ll tell you right off he’s a baddie, but if you see one patting a dog or being kind to a kid, that’s a sure sign he’s on the side of the angels.
.
. 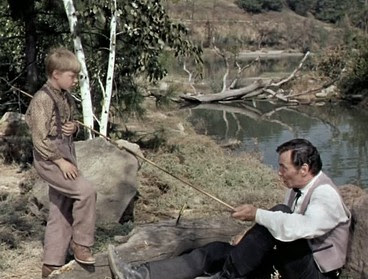 Being nice to a boy? Must be a goody.
.
Huffaker liked colorful names and the movie’s title, it may surprise you to know, is the name of Audie’s character. Audie explains that Mr Jones, his father,  rather unimaginatively called his sons by numbers, not being bothered to think up names, and so Audie was Seven Jones. Two was also a Ranger but was killed (by Flood as it turns out) and that’s why Seven has joined the Rangers at all, even though he can’t shoot a six-gun. Mama, however, didn’t like only numbers for her sons so she added names, One for the Money Jones, Two for the Show Jones, and so on. That’s how Audie got to be named Seven Ways from Sundown Jones. OK, why not. Presumably (though we are not told) there was Three to Get Ready Jones and Now-Go-Cat-Go Jones, though what Five and Six were called is a mystery.
.
. 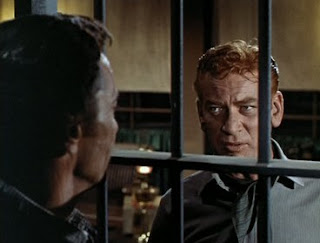 Lt. Tobey
.
Kenneth Tobey is the carrot-topped Lieutenant of Rangers who, it transpires, is not all he’s cracked up to be. The best thing, though, is that the tough Sergeant Henessey, who takes Seven under his wing and teaches him to shoot a sidearm, is John McIntire. He knows Flood of old and they are almost friends. It doesn’t stop him hunting Flood down though. Sadly, however, Flood shoots at his pursuers from a distance, unaware that the man he has killed is his old pal Henessey. Oops.
.
. 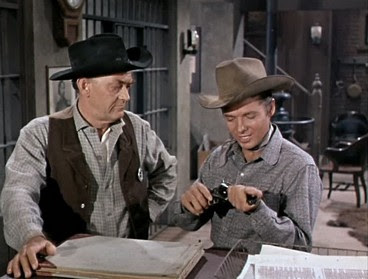 Well, son, that there is called a trigger
.
So it’s a pursuit Western, with Seven and Henessey, then Seven tout seul chasing down badman Flood. Seven acquits himself well and turns out to be tougher and more resourceful than his boyish appearance and rookie Ranger status lead Flood to believe. Classic Audie, in fact.
.
. 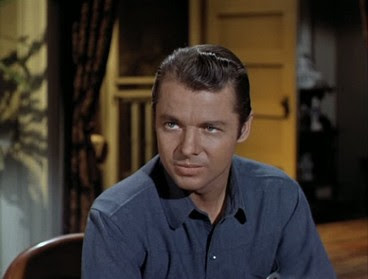 Tougher than he looks
.
Before leaving on the chase Seven just had enough time to fall in love with sultry starlet Venetia Stevenson in the last of only two Western movies she did (the other was the excellent Day of the Outlaw, in which she was good). The best thing about Ms Stevenson in this one, though, is that she has a dog named Apache which Audie saves from a hawk. Seven Ways from Sundown opines that Apache is an odd name, but that’s the kettle calling the pot black.
.
. 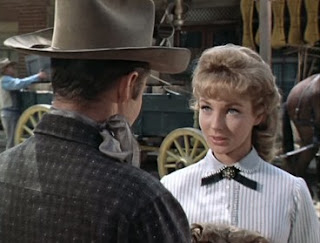 It’s lerve. You can’t quite see but that’s Apache in her arms.
.
Of course howsoe’er charming or simpatico Barry may be, he is a badman and cannot be allowed to get away scot-free. Hollywood mores dictate that he must perish. Nicely, but he’s gotta go. And Audie duly dispatches him.
.
. 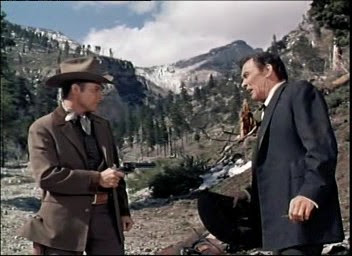 Ranger Audie gets the drop on Barry
.
The ending is very downbeat though, unusually so. It adds a touch of class to an otherwise fairly straightforward mid-budget Western. The New York Times review said, rather dismissively, “Undemanding audiences who have seen it all before should find it no more boring than usual” (very snooty) but actually I think it’s rather better than that. But then I am a bit of an Audie fan. And McIntire will raise any Western a notch too. 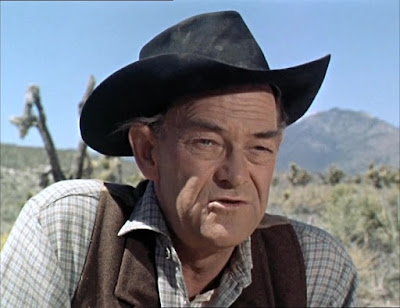 PrevPreviousThe Alamo (Buena Vista, 2004)
NextGun for a Coward (Universal, 1957)Next

PrevPreviousThe Alamo (Buena Vista, 2004)
NextGun for a Coward (Universal, 1957)Next
Jeff Arnold © 2023 – All rights reserved – Designed by BetterCallChris
Scroll Up