Though she was good in a couple of Westerns with Joel McCrea, Barbara Stanwyck is not really my idea of an ideal Western lead. Thus it is a bit difficult to like The Maverick Queen. Still, I have done my best, and can report a few positive features of this mid-50s oater.
.
. 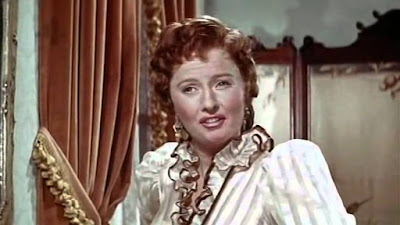 Barbara Stanwyck is a bossy unpleasant cattlewoman. How unusual.
.
Republic pushed the boat out on this one, filming it in their Trucolor and their widescreen ‘Naturama’ in very handsome Colorado locations. I’m a real Durango-to-Silverton railroad fan so it was great to see the train chugging through the gorge, and the robbery was excellent. The DP was Jack Marta, something of a Western specialist who worked on Dark Command and Cat Ballou, among many
others. Visually, it’s a very nice picture and there are almost hints of Loyal Griggs Shanery here and there, praise indeed.
.
. 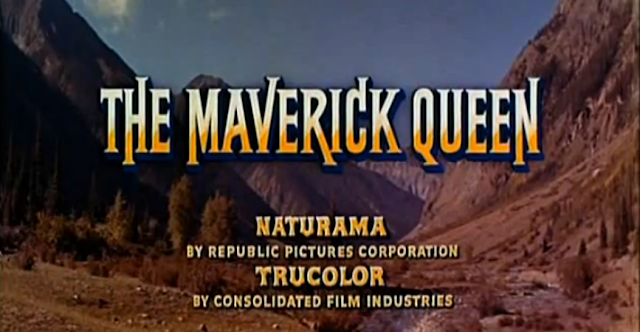 Widescreen
.
And then the support cast. Lots of familiar names pop up: Wallace Ford, Jim Davis, Emile Meyer, John Doucette. Always nice to see them. The stars, apart from Ms Stanwyck, are not at all bad. Barry Sullivan is the leading man. First seen in unsuitable range duds, he soon changes into proper Barryesque frock coat and silk vest, and deals faro in the Maverick Queen (for it’s the name of Stanwyck’s saloon). Sullivan was never in the very top flight of Western actors but could usually be relied upon to turn in a solid performance, especially in a frock coat. He would of course return to co-star with la Stanwyck in Forty Guns the following year (a trashy picture if ever there was one). In fact Stanwyck plays a similar role in both The Maverick Queen and Forty Guns, a bossy, unpleasant cattlewoman with grande dame pretensions.
.
. 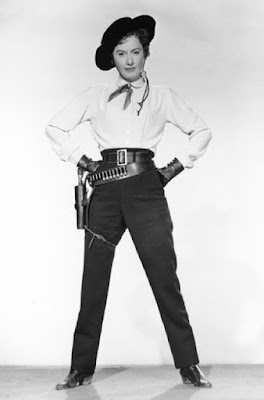 Yes, well. Maybe she was going for the Joan Crawford look.

.
And third billed we have Scott Brady. Now, I am definitely (or mos’ def as they say these days) a fan of Scott and his bros. They were actually Tierneys (pity: we could have called them the Brady bunch) and they all had a bit of a rep for being tearways. Lawrence Tierney was notorious for bar-room brawls, drinking a lot, getting stabbed and the like and brother Gerard (the Scott was a later stage name) didn’t hang about either, with narcotics charges, illegal bookmaking activities and suchlike dogging his career. But both (and Edward too) were great value on the screen, especially as heavies and hoodlums. Westernwise, Lawrence only did five (though he was Jesse James twice) but Scott Brady made quite a thing of them. Many Westernistas will remember him as Shotgun Slade on TV but he started big-screen Westerns in 1949 (one of those awful Yvonne de Carlo efforts), was Bloody Bill Anderson in Kansas Raiders the year after, and he was the Dancin’ Kid in Johnny Guitar in ’54. His first lead part in an oater was that year too, when he was Billy the Kid in Columbia’s The Law vs. Billy the Kid (with the excellent James Griffith as Pat Garrett). Anyway, it’s always good to see Scott Brady with a six-gun, especially if he is a baddy.
.
. 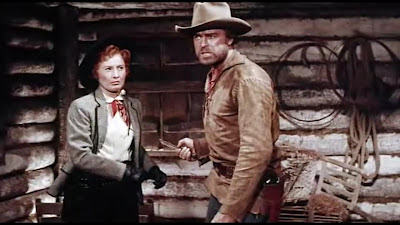 Scott as a mean Sundance Kid. Stanwyck romances him but then throws him over for Barry. Scott doesn’t care for that at all.
.
And he’s a baddy in The Maverick Queen alright; in fact he is the principal baddy, the meanest hombre in a whole gang of outlaws. For this is a Butch Cassidy and the Sundance Kid picture, and Scott is Sundance. But no good-bad Robert Redford-type Sundance he. Nay, he is mean through ‘n’ through. And rather dirty, scruffy and unshaven too. Howard Petrie is Butch Cassidy, and a very commanding leader he is as well, ordering minions about hither and yon (the real Butch was no bandit king and was more or less accepted as the leader at different times). Petrie’s part is much smaller, though, and Butch doesn’t have all that much to say or do. It’s really a Sundance movie.
.
. 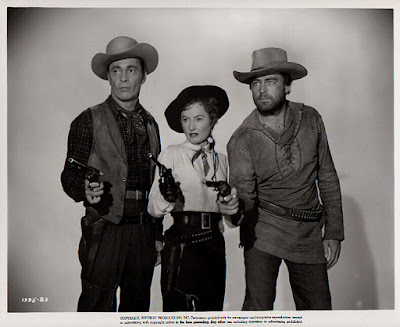 Sullivan, Stanwyck, Brady: a love/hate triangle
.
Among the gang at the Hole on the Wall (the story is set in Wyoming, not Colorado) are George Keymas as Muncie and John Doucette as Loudmouth, but they are the only named desperadoes. The whole Wild Bunch numbers eleven (I counted them) but heaven knows who the others were.
Barry is Jeff Younger, a nephew of Bob and Jim’s. Or he says he is. Various remarks, and the clothes and guns, lead us to believe the story is set soon after the Civil War, which is a bit odd considering that the Wild Bunch didn’t maraud until the 1890s but Westerns are not famous for respecting chronology or historical fact, are they? Later in the movie Jim Davis turns up, also in a frock coat, and says he is Jeff Younger. Well, it’s all very confusing. I don’t think Cole and Jim even had a nephew Jeff anyway. Though Jeff is an Western excellent name, of course.

Wallace Ford is a badman, which is a bit unusual. He appears to be the loyal factotum of the rancher Lucy Lee (Mary Murphy) but is actually a low-down spy for the Wild Bunch. The skunk.
.
. 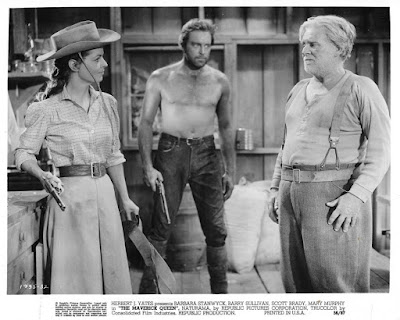 .
Kenneth Gamet wrote it and it’s supposed to be based on a Zane Grey novel. Gamet was capable of good and not-quite-so-good Western work: he did a lot of Randolph Scott oaters and several were really quite classy, especially the outstanding Coroner Creek (based on a Luke Short story). Later he wrote TV shows, especially Casey Jones. The Maverick Queen is tight and professional, I must say, if a tad corny here and there.
The director was good old Joseph Kane, Republic’s top Western director, who worked especially with John Wayne, Roy Rogers and Gene Autry. I like him because he was a cellist (I play too, or used to). He started writing silent Westerns in 1925 and his first as credited director was a Ken Maynard oater in 1934. He was still directing episodes of The Iron Horse on TV in the late 60s. Respect. He does a good job on The Maverick Queen; it’s taut and pacy.
.
. 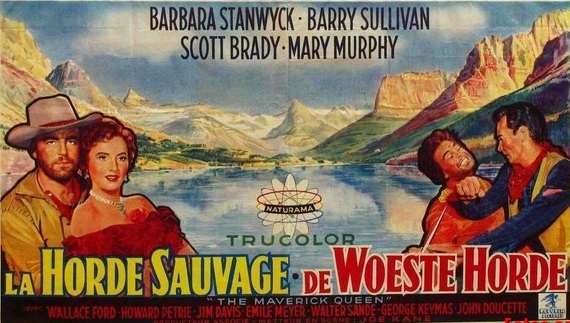 Worth a watch
.
Some of the music is good, by Victor Young, though it occasionally strays into the portentous or overblown. The Ned Washington ballad over the opening titles, sung by Joni James, is, however, dire. And we have to suffer through it twice more during the movie.
If you’re expecting Butch and Sundance to get away and go off to South America, I’m afraid (spoiler alert) you’re going to be disappointed. They did not die under the guns of the Bolivian army but at the hands of Barry and his fellow tough-guy Pinkertons, e.g. Emile.
If you are a Stanwyck groupie you’ll go for The Maverick Queen big time. But even if you are a normal human being you’ll get quite a lot out of it. It’s not great art but it certainly has its points.