Towards the end of his career, in the mid-1960s, Audie Murphy’s contract with Universal ran out. New management was less interested in contract stars and thought Westerns were a thing of the past, the dolts. Audie made a few pictures for Columbia from 1964 to ’67 and other studios too, but there was no doubt that his star was on the wane. Still, the Columbia oaters were very decent, with similar production values and budgets to the Universal ones – that is to say not stellar but certainly adequate. The movies were formulaic but attractive visually, with good camerawork, nice color and fine ‘Western’ locations.
.
. 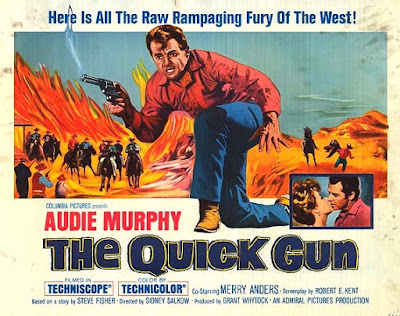 The mixture as before, and still quite good
.
Such a one was The Quick Gun, the second of four films produced by Edward Small’s Admiral Pictures, which was another go-round of the plot about coming back to town after time away gunslinging because Pa has died and the hero wants the ranch back. Then he’s going to hang up his guns, you know how they do. Audie is Clint Cooper and this Clint has gained a rep as a fast gun, I mean a quick gun, and not on the right side of the law either. The townsfolk shun him for this on his return and because he bumped off a couple of their number before departing (though of course it was only self-defense, it was Audie after all).
.
. 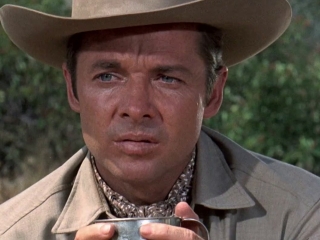 Audie wants to hang up his guns
.
The good news is that Ted de Corsia is Spangler, the outlaw boss of the gang which hitherto counted Clint among its ranks. I always like Ted. Big and brawny with a growl of a voice, he was ideal as a heavy in Westerns, or any other genre come to that. In fact he started as the killer in The Lady from Shanghai. He was a regular of TV Western shows but he also did a great many big-screen oaters, and you can often see him bossing gangs or henching other heavies. Ted plays Spangler as a charismatic but ruthless villain with panache, and he does an excellent job.
The honest sheriff in town, who turns out to be a rival for the gal (Merry Anders as “Helen over at the schoolhouse”) but is awfully decent about it when she opts for Audie, is James Best. Often the bad guy in Westerns, Best could also do good lawmen (I’m not thinking of The Dukes of Hazzard here). He was in over a hundred Westerns altogether, mostly TV shows but he started in a classy big-screen oater, Winchester ’73 in 1950, and he knew Audie well because they had been in the war together: he was Cole Younger to Murphy’s Jesse James in the Civil War yarn Kansas Raiders the same year. In The Quick Gun Sheriff Best sacrifices himself and is cruelly shot down by bandit Ted but his heroism helps to save the town. Actually, it’s mainly the Reverend’s fault: he (Charles Meredith) nags the sheriff into going to reason with Ted, a foolish and doomed attempt that gets him killed.
.
. 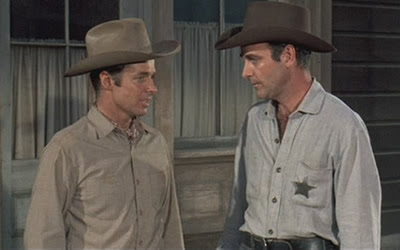 With Sheriff Best
.
Another good thing: Frank Ferguson is a leading townsman, Helen’s dad, who bravely stands by Clint, helps him get the better of the renegades and is shot in the shoulder for his pains. I always like Frank. It’s that droopy mustache and sloping eyebrows. They make him look like an avuncular walrus.
.
.
By the way, both Ferguson and Best teamed up with Audie again soon after in The Cimarron Kid.

Ray Hatton is “Elderly man” and Gregg Palmer (a member of John Wayne’s stock company) is there too. I like to see old familiar faces in these movies.
There are some good brawls, especially one in a barn where the protagonists fight with those hooks they use to grab straw bales. The climactic gunfight when the outlaws attack the town is a bit one-sided: although the townsmen outnumber Ted’s gang and are well positioned behind burning barricades they still manage to get shot down, and the baddies take the town.
.
. 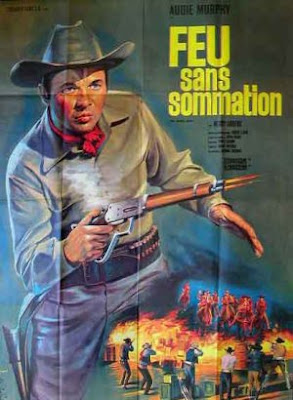 I like the French poster
.
Ted starts with a dozen men but luckily a few are shot down so that when they take the town the gang comprises the right and proper number of seven. As you know, all gangs, posses and suchlike ought to number seven in Westerns.
Talking of shooting, the movie was nicely photographed by Lester Shorr, who had been working on Westerns since the Oscar-winning Cimarron in 1931 and became a regular DP on TV oaters, especially Bonanza. It’s supposed to be 1873 Montana but the California locations did well enough. The director was good old Sidney Salkow, a Columbia steady who had been directing (and writing) cowboy movies since 1952. Probably his biggest efforts were Sitting Bull in 1954 and Robbers’ Roost in ’55, though he spent most of his Western time on TV shows, especially Fury and Tales of Wells Fargo. He does a workmanlike job on this Audie outing and the movie rattles along. There’s a High Noonish bit in the last reel when the heroine shoots the bad guy in the back to save her lover.
.
.
I said above that it was “another go-round of the plot”; well, indeed it was because it was based on a short story, The Fastest Gun, by Steve Fisher and it had already been made as Noose for a Gunman (UA, 1960, also reviewed), with Jim Davis in the Audie part. And entertainingly, Ted de Corsia played the heavy in both! There are also more than a few similarities in the 1955 Sterling Hayden oater Top Gun (see review). So the tale was hardly original.
.
.
Still fun each time, though.