Cowboys Indians and Indians
.
.
Indian Paint is an independently produced mid-60s Western, unusual in that there are no white men in it (well, there are plenty but they are playing Indians) and no firearms appear at all. It’s a story set on the Plains before the palefaces arrived and tells of the coming of age of a young Sioux brave and the tribe’s war with the Snakes.
.
. 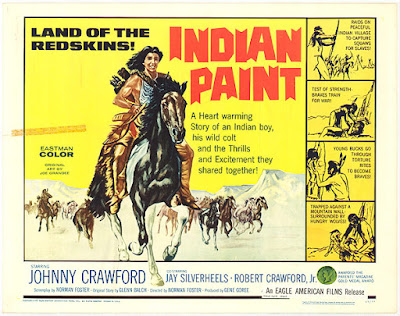 .
Jay Silverheels is the chief. Of course we all know Mr Silverheels as Tonto but he had a whole non-Lone Ranger career aside from that, often playing Indians of various tribes in big-screen Westerns. He was Geronimo several times. He started in the early 1940s in Kut Carson and Western Union and was a regular from then on. You can often spot him, usually as a chief of some kind. In Indian Paint he is well into his fifties and has broadened out (but who am I to talk?) yet he still has that certain authority as leading Native American on the screen.
Western fans, of my generation at least, will remember Johnny and Robert Crawford as the boy heroes of late-1950s shows The Rifleman and Laramie respectively. By the mid-60s they had grown (to the point where Johnny, born 1946, wasn’t all that convincing as a young boy; you wonder why he wasn’t already riding on the warpath with his dad) and together they starred in Indian Paint, which was produced and edited by the boys’ father, Robert Crawford Sr. So it was a family affair. Johnny is Nishko, the star, and Robert is Wacopi, his slightly older rival (actually Robert was younger but never mind).
.
. 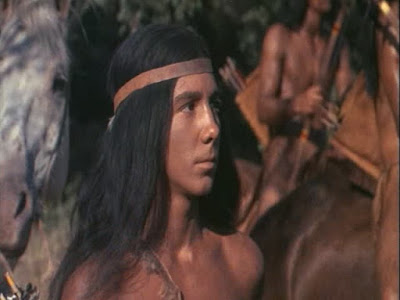 .
It’s very much in the ‘family film’ category, and it’s innocuous, but it isn’t too bland. It mainly concerns a paint colt beloved by Nishko and as such the movie was doubtless aimed at the juvenile market (and maybe their moms).
Sadly, most of the Indians are played by whites (Silverheels and Pat Hogan as the medicine man are exceptions) but that was how they did it in the 1960s.
It was directed and written (from a Glenn Balch novel) by Norman Foster. Foster was no slouch at the Western. He had first directed one (a Cisco Kid movie with Cesar Romero) in 1940 and had gone on to do the interesting Rachel and the Stranger in 1948. Later, he directed and/or wrote a lot of Davy Crockett and Zorro episodes on TV, and film versions of those.
The cinematographer on Indian Paint was Floyd Crosby (David’s dad), no less, very famous for having done the fine photography of High Noon. The surprisingly lush, green locations were in Texas, and rather bucolic.
So this movie was no junker. It had quite a lot going for it. If you came across it one day, you could certainly give it a go.