Spirit of Steamboat by Craig Johnson

Coming after The Serpent’s Tooth, the thirteenth episode in the story of Walt Longmire, Wyoming county sheriff, Spirit of Steamboat, (Viking, 2013) is neither a novel nor a short story (the saga hitherto has been told in nine novels and three short stories). Author Craig Johnson says that it started out as a short story but outgrew that form, not, however, reaching the status of full-blown novel. It’s a novella. 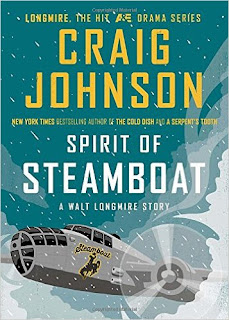 Episode 13
.
It’s an aviation story, and a return to the time when Walt had just become sheriff. Wife Martha is still alive and daughter Cady just a child. Walt’s predecessor Lucian Connolly is more active than in the later books, though still legless. Lucian was apparently a pilot in the Second World War and flew bombers over Japan. Now (Christmas Eve 1988) there is a little Japanese girl who has suffered terrible burns and she needs to get to hospital in Denver urgently. But there’s a humdinger of a storm moving rapidly down from Canada and emergency helicopters can’t fly. In fact nothing can, except maybe a geriatric B25 that had been used by General Eisenhower. And that was exactly the aircraft that Lucian used to fly.
Steamboat was a Wyoming bucking bronc at the turn of the 20th century, a horse that couldn’t be ridden, and it is an appropriate name for an airplane which will lurch and twist in the high winds all the way down into Colorado. Steamboat’s story didn’t end well, though: the horse fell victim to blood poisoning caused by some old barbed wire and the poor beast was shot with a rifle. The airplane named for him fares slightly better.
.
. 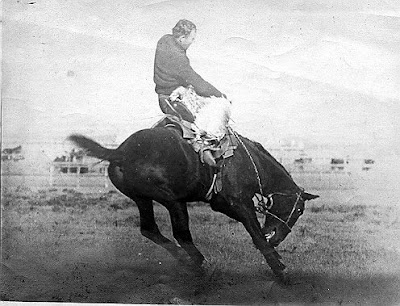 Gary Holt on Steamboat, Laramie, 1903
.
The doc, Isaac Bloomfield, goes along to nurse the child and he performs heroically on the flight to keep the girl alive. The patient’s Japanese grandmother is also there. Walt is needed up in the cockpit to pump a handle to keep the hydraulic pressure up but has to crawl back now and then to act as nurse to the surgeon.
As with all Longmire stories, there is an Old West tinge to it despite the modern setting. The eccentric (and bibulous) Lucian is described and Johnson says “Slim Pickens as pilot. We were doomed.” The gun that was used to put down Steamboat, we are told, once belonged to Tom Horn. When the doc has no surgical equipment and must improvise, he says he is going to “get western”.
Well, there’s much danger and excitement before they reach Denver and Lucian gets there on a wing and a prayer.
.
. 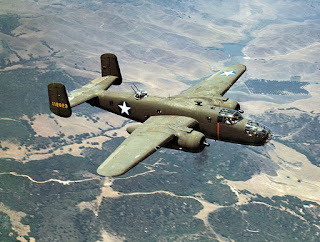 A B25
.
There are occasional infelicities of style. Mr Johnson is one of those (increasing in number) who believes that off is not adequate as a preposition but must have an of added to it: “…some wiseacre had hung an old keychain of the state emblem off of the yellow escape hatch…” We also get, “I wondered at the turn of the fates that would put a hurt Japanese child in such a beast like Steamboat”. These are exceptions. Generally, the English is sound and the style literate.
.
. 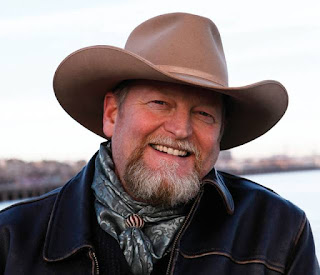 Craig Johnson. Nice hat.
.
Like all the Longmire stories, this one is enjoyable. It can pretty well be read in a sitting, or two anyway. Next in the series came Any Other Name, a full novel, in 2014, which we will read another day.
So long for now, e-pards.