Western icon: the buffalo
.
.
Few animals are more symbolic of the Old West than the American bison (bison bison), commonly known as the buffalo. The horse, maybe, but wild horses play a relatively small part in the mystique of the West, certainly the celluloid West, and the bear and big cat occasionally appear but the buffalo is without rival as far as wild animals are concerned. In 2010 PBS aired a documentary, Facing the storm: story of the American bison, made by High Plains Films and produced and directed by Doug Hawes-Davis. The cinematographer on the film was also the writer, Drury Carr. Messrs. Hawes-Davis and Carr have collaborated on several other documentaries. Their history of the American bison is captivating.
.
. 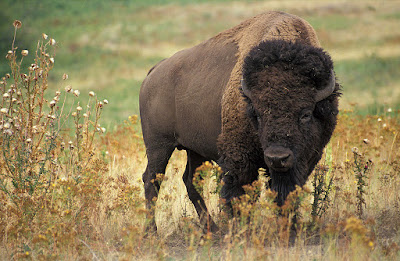 American bison
.
Bison are very old. They go right back to pre-human times and were great survivors – until the extermination on an industrial scale by the white man in the nineteenth century. Nomadic beasts, they roamed the plains for thousands of years, outlasting droughts and blizzards, in vast herds. Exact numbers are of course impossible to determine but the Bureau of Sport, Fisheries and Wildlife estimated in 1965 that there were some 60 million animals up to 1800. It is difficult to imagine such numbers. Certainly the American Indians who lived on them thought of them as an infinite resource. The bison were down to 40 million by 1830, a huge drop, and one wonders why. It was far too early for the white buffalo hunters to have destroyed so many. Were the Indians killing unsustainable numbers? Were there natural or ecological reasons?
.
. 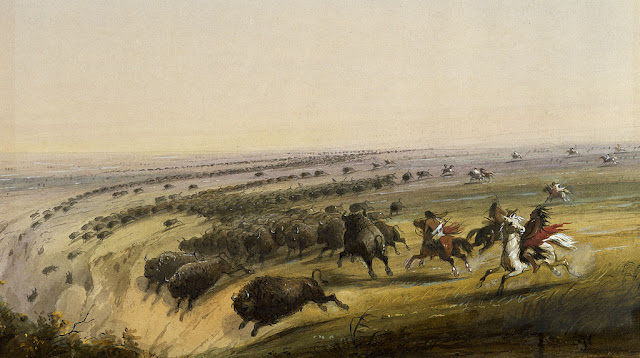 A popular way to kill them was to drive them off a cliff
.
Much is made in the film, especially by Native Americans interviewed, of the mutual or symbiotic relationship between the tribe and the bison. Several interviewees says that the Indian depended on the buffalo and the buffalo depended on the Indian. Plenty of examples are given of the former but none at all of the latter. Just how did the buffalo benefit from the Indians, one wonders? What did the American Indians do that made their life better or easier? We are not told.
.
. 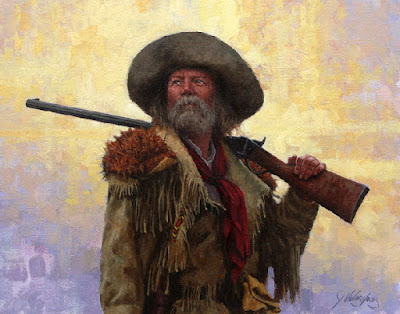 Romantic view of the buffalo hunter
.
The era of the white buffalo hunters was very short: they needed but a few years to annihilate the herds with their big guns. By 1870 there were only 5.5 million remaining but by 1889 there were 541 animals – now they could be counted exactly. It is to us today a horrifying statistic, the wholesale destruction of a species in an act that, had it been humans concerned, would be called genocide. It was done for meat (that’s how Buffalo Bill got his name, killing bison for the railroad gangs and the Army), for profit, for sport and for the more sinister motive of eliminating the means of support of the ‘troublesome’ Plains Indians. The sporting side is illustrated in the film by excursions organized by the Kansas Pacific Railroad in which hunters sometimes did not even have to alight: the train slowed to five miles an hour to enable the marksmen to slaughter animals from their seats.
.
. 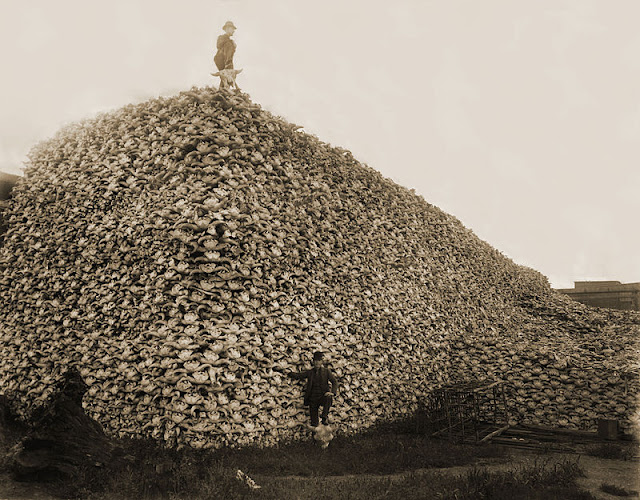 Horror show: buffalo skulls
.
In the 1880s a group of Easterners in The American Bison Society became alarmed at the extinction of the species and organized, not necessarily to save the animals (they thought that impossible) but at least to have some specimens to stuff and mount and display for the edification of Americans. We might consider those aims somewhat limited. A leader in this area was William T Hornaday, taxidermist and author, first director of the New York Zoological Park, known today as the Bronx Zoo, and a pioneer in the early wildlife conservation movement in the United States. It seems paradoxical for a conservationist to send out an expedition to track the few remaining animals in the wild and shoot them. But that’s what happened. When the society launched another such expedition in 1887, however, it failed because they could not find a single one.
One small herd did, however, survive in Yellowstone Park. These were managed and by 1915 there were about a thousand. Since then, buffalo have been farmed but often hybridized with cattle. The Yellowstone herd are the only animals with ‘pure’ genes.
.
. 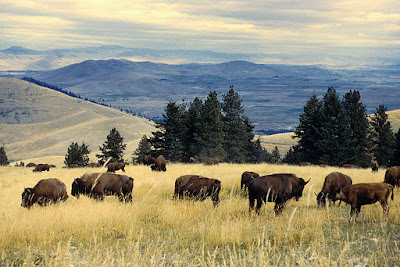 A herd in the wild – a rare sight
.
In modern times the battle between cattlemen and conservationists has flared up. Although, the film tells us, there is no evidence that the disease brucellosis can pass from bison to cattle, you won’t convince Montana ranchers of that and they hate the buffalo. The state backs them and any animals leaving the limits of Yellowstone are hunted, with great glee, by a singularly coarse and vulgar kind of person, to judge from the film. Animal rights activists do their best to stop them, sometimes ending up in court because the law considers it an infringement of human rights (of the hunter) to get between a hunter’s gun and its target. The state of Montana seems to have much to answer for.
The lot of semi-domesticated bison, farmed for their meat, is not a happy one, though. Images of the way these animals are treated (there are up to 400,000 animals in private hands now) are not easy for an animal lover to watch. But there are also groups doing their best to protect the buffalo and create a habitat for them which is, if not wild, then as natural as possible. Fifteen tribes of Indians, for example, have created a body to encourage herds of bison to roam as widely as space permits. We might think of these creatures as producers of free-range burgers rather than factory-farm produced ones.
.
. 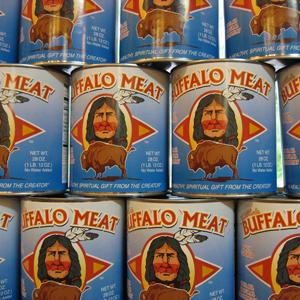 It’s supposed to be better for you than beef
.
In the 1980s the Poppers in Rutgers University proposed the re-introduction of wild buffalo into Kansas, to roam free. The Poppers were and still are vigorously opposed by many Kansas farmers but the Poppers have a valuable convert in the governor of the state, who says that the Kansas plains are now so depopulated that roaming buffalo might be a positive thing.
The film ends with an upbeat suggestion that the 21st century might be a good one for the buffalo after the previous two have brought near-extinction.
Time will tell. Meanwhile, the buffalo remains for us Westernistas a vital symbol. I saw one once, in Yellowstone Park, trotting insouciantly alongside our car. He was a great horned bull but you know he seemed almost elegant, in the way that big men sometimes make graceful dancers. But isn’t it sad that we find a sighting of one animal like that memorable. There were once sixty million to choose from.
.
.

PrevPreviousA Time for Dying (Fipco/Corinth, 1969)
NextRiders of the Rockies (Grand National, 1937)Next

PrevPreviousA Time for Dying (Fipco/Corinth, 1969)
NextRiders of the Rockies (Grand National, 1937)Next
Jeff Arnold © 2022 – All rights reserved – Designed by BetterCallChris
Scroll Up