I’ve come to the conclusion that I quite like Rory Calhoun Westerns. I know that may seem to be damning with faint praise but I don’t mean it like that: I would say that 1950s black & white Rory
Calhoun Westerns were the vin ordinaire of the genre. Now I am a great defender (and consumer) of vin ordinaire. A Château Lafitte 1955 is all very well if you can get it, but you wouldn’t want it every day. I wouldn’t anyway, even if I were a billionaire. The wine I imbibe every day is labeled mis en bouteille en France, a pretty clear indication that it is a mixture of rough reds from, perhaps, Romania and Morocco, but it is cheap, cheerful and light, and what’s wrong with that? A Rory Western is in the same league. The Searchers would be your premier cru but  I wouldn’t want to watch it every day. Most days a Calhoun Western will do you.
.
. 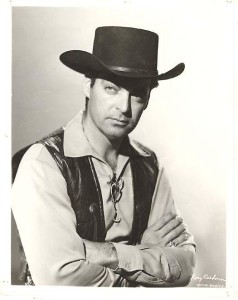 Rory being Rory
.
Mind, this one is hardly high art. It has the look of a TV show (though it was made for theatrical release) and is a quite interesting example of reverse-engineering, as TV oaters, influenced by big-screen Westerns, gained ground and in turn started to influence big-screen films right back, which began to look like lengthened episodes of Gunsmoke. There are painted Monument Valleyesque backdrops for the sequential studio scenes.
.
. 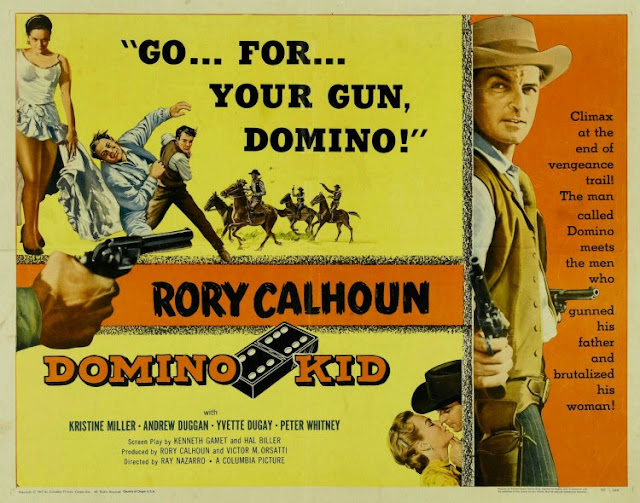 Well, I’ve seen worse
.
It starts well. Gunslinger Domino (Rory, a tad aged perhaps, at 35, to be playing ‘kid’ roles, but hey, who’s counting?) enters a cantina, and tells the saloon keeper that he is there for a high-8 o’clock showdown gunfight. He duly dispatches his enemy and rides out. Yup, he’s a tough hombre alright.
You see, Domino has been away fighting for the South in the War and when he comes back, his ranch has been raided, his daddy murdered and the whole place gone to rack and ruin. He is cross. So he sets out hunting down the five villains who did it. The one we saw in the opening reel was one of the five, and he proceeds to gun down a couple more (though they draw first, of course). These are a portly frock-coated Roy Barcroft (you expect him to pull a derringer but he doesn’t) and a splendidly malevolent James Griffith, one of my fave Western character actors. The thing is, though, as the avuncular pipe-smoking sheriff (Robert Burton) explains in order to aid plot development, no one, inc. Rory, knows who the fifth man was.
Well, I thought it was Andrew Duggan. He is smoothie Wade Harrington, who wants to buy up the whole valley, and I pegged him for the villain right off. For one reason, it was Andrew Duggan. But it’s one of those implausible Westerns in which the prima facie villain suddenly turns goody and switches to the hero’s side. No, the real 5th man turns out to be someone else, a character introduced late in the action, a nasty cowardly bully. There is quite an interesting final scene in which hero Rory finds himself in the middle of Main Street with a gunman opponent both behind and in front of him. Awkward.
.
. 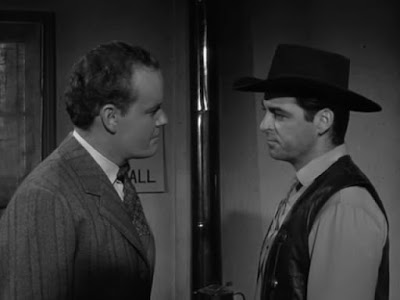 Andrew has to be the villain, surely?
.
There is quite a complex lerve interest, as Rory’s sidekick Juan (Eugene Iglesias) loves saloon gal Rosita (Yvette Duguay) who loves Rory, who loves Barbara (Kristine Miller) who is loved by Andrew Duggan. So that adds spice to the conflict. Of course Barbara wants Rory to give up his vengeance quest, and indeed gunslinging generally, as women in Westerns tend to do, while he tells her that a man’s gotta do what a man’s gotta do, etc.She should’ve known that, surely. 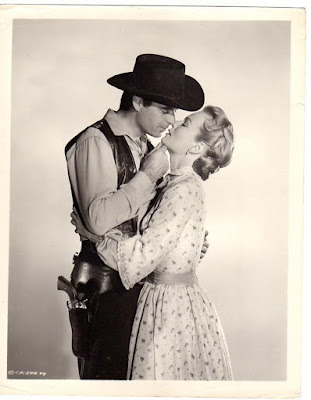 Kristine Miller lerves Rory
.
Actually, I quite liked Barbara: she is an independent woman with her own freighting business and no pushover for Mr Duggan. I liked her spirit. Ms Miller, daughter of a vice-president of Standard Oil and probably not short of a buck or two, was quite well known in the world of lower-budget movies. Westernwise, she was Margaret Jones in Stories of the Century on TV and did a lot of Western TV shows but occasionally appeared also in mighty big-screen epics of this kind.
Rosita does a pretty good dance in the cantina (it might be worth watching this movie for that).
.
. 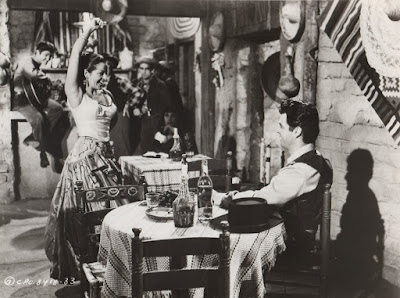 Wow
.
Denver Pyle makes a brief appearance as a henchman but is soon written out. Probably not worth watching it for that.
Well, as you may guess, Rory, though wounded, wins through and gets the girl. We kinda knew he would.
.
. 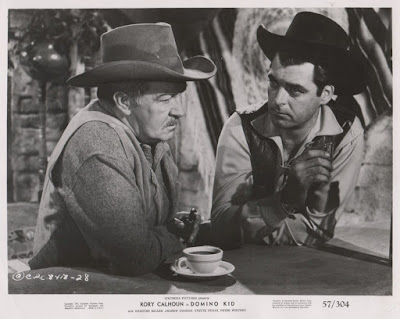 Avuncular sheriff
.
All in all, no great shakes, and if you missed this Western you would not repine for evermore, but still, you could watch it if you were a dyed-in-the-wool Western fan.
Oh, you too?