.
Slim in a Roosterish eyepatch
.

The TV film, television movie, TV movie, telefilm, telemovie, made-for-television film, direct-to-TV film, movie of the week (MOTW or MOW), feature-length drama, single drama or original movie, call it what you will, has become an entertainment staple. The genre went right back to the immediate post World War II period but it really captured audiences in the 1960s. I am informed that in 1996, 264 made-for-TV movies were made by the five largest American television networks at the time (CBS, NBC, Fox, ABC, and Warners), averaging a 7.5 rating. By 2000, only 146 TV movies were made by those five networks, averaging a 5.4 rating, but the number of made-for-cable movies made annually in the US doubled between 1990 and 2000.
Made-for-TV Westerns can be bland and safe, and watched at a sitting, with their periodic fades-to-black for ads and modest budgets, they can be uninspiring. But at least they are out there, and occasionally you find one that isn’t too bad at all. Some of them can be dire, though.
Today we’ll go back to the early 1970s and have a look at one, The Gun and the Pulpit, a 74-minute ABC offering. I fear it was closer to the dire category than the not too bad one. Still, a Western’s a Western, n’est-ce pas?
.
. 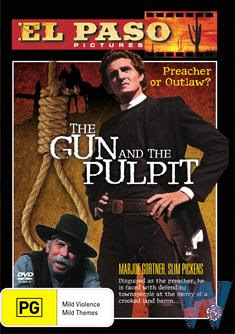 Eminently missable
.
It opens reasonably well, in nice Old Tucson saguaro-ish locations, with Jeff Corey leading a lynch mob, and soon we see Slim Pickens in a Roosterish eyepatch. Mmm, we think, the omens are good. Sadly, though, it’s downhill from there on in. The makers went for a semi-comic approach and it falls flat. Irritating ‘comic’ music (George Aliceson Tipton) indicates which parts are supposed to be funny (we wouldn’t have known otherwise). It was directed by Daniel Petrie, who evidently was a serious professional but he didn’t know Westerns; apart from an episode of Hec Ramsey and a Playhouse 90, this was his only oater.
.
. 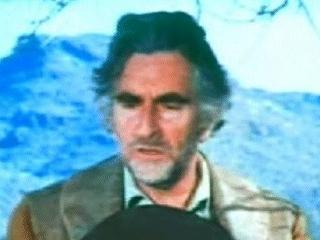 Jeff leads the lynch mob
.
And it stars Marjoe Gortner, who had been ‘ordained’ a minister at the age of four (his name is apparently a combo of Mary and Joseph), sang in a rock band and then went into acting, doing a series of dismally bad films that caused his career to sink into obscurity. I suppose he was an appropriate choice for a gunman who takes on the identity of a preacher to escape Jeff Corey’s pursuing posse and then ministers to the town of Castle Walk in a rather unorthodox way. Preachers with a gun were of course quite popular in Westerns – one thinks especially of Glenn Ford in Heaven with a Gun and Robert Mitchum in 5 Card Stud – but I fear Mr Gortner was not of this august company. In fact as a Western lead, he was, frankly, hopeless. He was also having a bad hair day every day of the shoot.
.
. 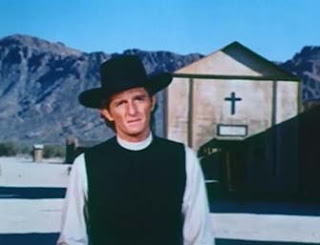 Marjoe Gortner is the preacher with a gun
.
Jeff is sadly soon written out but Slim takes over as saving grace and we get to enjoy a typical Pickens performance, happily.
.
. 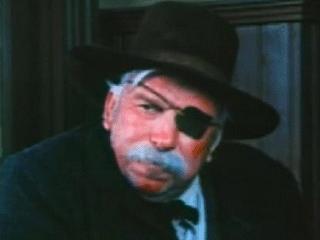 Slim in great form
.
He is the unimaginatively named Billy One-Eye and he sidekicks the gunman-preacher in the struggle against the bad guys, for, yes, a villain has treed the town. Was there ever a town in the West which didn’t have an evil rancher/saloon keeper wanting to take over? Not if we are to believe Westerns. This one is Mr Moss (though the preacher ostentatiously refuses to use the Mr part of his name) played by David Huddleston, the ‘other’ Big Lebowski, Dr Jones in Rio Lobo, the saloon keeper in Billy Two Hats (the same years as this) and Olson Johnson in Blazing Saddles (also the same year).
.
. 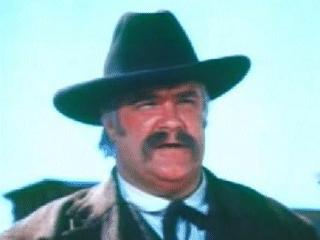 Huddleston has treed the town
.
Ross hires a feared gunslinger, Jason McCoy, called Jake (Clint accomplice Geoffrey Lewis, High Plains Drifter, Bronco Billy, etc) and we know there’s gonna be a showdown. Actually, though, the
Main Street quick-draw at high noon is a bit of an anti-climax.
A girl falls for the preacher, of course, Sally (Pamela Sue Martin) but once the town is saved from the villain, the preacher prefers to go back to lone gunslinging and so she doesn’t get to ride off into the sunset with him. She’ll get over it.
Well, it was good to see Corey (briefly) and Pickens, but really the rest of this rather spaghetti-ish TV movie is, honestly, grim.