The Gangster Movie and the Western

Six-gun vs. tommy-gun
.
.
This blog concerns itself with the West and the Western. We do not discuss other, weaker genres such as thrillers or sci-fi, still less (perish the thought) musicals or rom-coms. Nay. Still, we do have a rather broad church view of what constitutes a Western, and furthermore we have been known (on rare occasions) to watch other, non-Western movies. And today I thought we might take a little ride off the trail we normally follow and examine for a moment, briefly, another type of film, the gangster movie.
When you watch a picture like Last Man Standing, you realize what an overlap there was between the Western and the gangster movie. Effectively a remake of A Fistful of Dollars  (itself of course a remake of a Japanese film which was a remake of a gangster story Red Harvest) it tells of Prohibition-era gang war and a lone hero who plays one side off against the other. OK, they have automatics, tommy-guns and automobiles but Last Man Standing, directed by well-known Westernista Walter Hill, who once said in an interview that he considers all of his films as a director Westerns, is a Western by any other name.
.
. 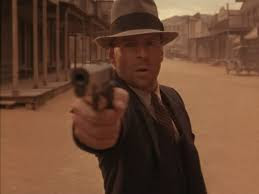 A Western by any other name would smell as sweet
.
And in real life too, the careers of such figures as John Dillinger (1909 – 34), Pretty Boy Floyd (1904 – 34), Baby Face Nelson (1908 – 34) or Bonnie Parker (1910 – 34) and Clyde Barrow (1909 – 34) [and we see that 1934 was not a terribly good year for post-Western outlaws] have more than a little of the James Gang or the Dalton brothers about them.
In Public Enemy (Warner Bros, 1931), Tom Powers (James Cagney) and his sidekick Matt (Edward Woods) kill a horse after the animal has thrown and caused the death of their gangster boss. The real-life basis for this story (such as it was) concerned one Louis ‘Two-Gun’ Alterie, so-called for his habit of using two pistols to shoot out the lights in saloons. [As an aside I may add that this is something I have always wanted to do and Richard Thompson’s Shoot Out the Lights may be my favorite song, but anyway, where were we?] Mr Alterie (1886 – 1935), of French origins, was born in Colorado and was another of these Western/gangster crossover figures. After Al Capone had mobster Dean O’Banion assassinated in 1924, Alterie became a celebrity by challenging O’Banion’s killers to a Virginian/Trampas-style showdown gunfight. It never happened but it was a sign of Alterie/Cagney’s Western credentials, and of the similarity between Westerns and gangster movies.
.
.

Louis ‘Two-Gun’ Alterie
.
Public Enemy was probably the seminal movie of the whole gangster genre. There had been mean streets/crime dramas as early as 1906, The Black Hand, and 1916, with DW Griffith’s Musketeers of Pig Alley, but the fully-fledged gangster movie was born in 1931, with, later in the same year, First National’s Little Caesar, and United Artists’ Scarface following on in ’32. Let is not forget that WR Burnett wrote Little Caesar and also worked on the screenplay of Scarface, and Burnett was a leading figure of the Western genre – with such quality oaters as The Westerner and Yellow Sky to his credit. He also wrote works which crossed over admirably, such as High Sierra, which became Colorado Territory, and The Asphalt Jungle which was remade as the Western The Badlanders.
.
.
Richard Slotkin, in his 1998 book Gunfighter Nation: The Myth of the Frontier in Twentieth-Century America, a stimulating but overlong book which I will review on this site if I ever finish it before dying of old age, draws interesting parallels between Public Enemy and a Western we reviewed only the other day, William S Hart’s Hell’s Hinges (1916).
Both Hell’s Hinges and Public Enemy start in an urban slum and then move to wide-open boom towns – Placer Gulch and Chicago respectively. Tom Powers (Cagney) and Hell’s Hinges hero Blaze Tracey (Hart) are both badmen who associate with racketeering saloon keepers (Silk Miller in Placer Gulch, Paddy Ryan in Chicago). These saloon keepers enlist our heroes to prevent the “psalm-singers” from shutting down the rackets.
.
. 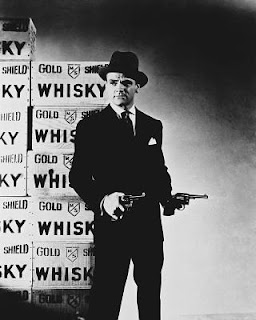 Two-Gun Jimmy
.
Both men might be redeemed by the love of a good woman – a standard theme of both Western and gangster flick. In both genres women tend to be either saintly and pure or whores with a heart of gold, and it’s the pure ones that the heroes usually end up with. Gangster movies and Westerns have something else in common: they often culminate in a climactic shoot-out. 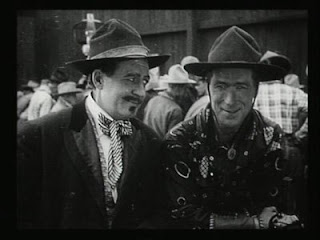 Hero starts in cahoots with saloon keeper racketeer
.
OK, the gangster film modernized the settings, and the firearms, costumes and means of transport are different, and these were very important to the Western, but essentially, as Slotkin writes, “[This] did not fundamentally transform the underlying structure of the myth itself; nor did it drastically depart from the narrative conventions of the Western genre.”
So, then, we can count gangster films as Westerns?
Nope.
There are key differences. When you look at Tom Powers’s dealings with women you see pretty strained, not to say Freudian relationships, suited perhaps to the intense urban settings and modern pace of life. Powers is spoiled by his mother (he has a brutally abusive father) and dallies with the racy Gwen, glamorous gangster moll, and then a prostitute, rejecting both at the end and opting to go out with his male buddies in a blaze of gunfire. Slotkin: “…for the gangster hero all women are snares and all streets are dead ends.”
And gangster vengeance plots indeed tend to end with failure and death. There is no going off to California (an equally mythical new frontier) with the loved one, as Blaze did in Hell’s Hinges and countless other Western heroes were subsequently to do. The gangster dies in a hail of bullets with his schemes in ruins. In Hell’s Hinges the final conflagration is purging, and civilization and moral rectitude the result. In gangster films there is no such salutary outcome: the real fight is just between one gang (our hero’s) which is slightly more “honorable” in mobster terms than another, and often it’s not even the “good” gang that wins. And as for Christianity and moral rectitude, gangster movies take a less rosy view of bourgeois American pieties: they are associated with the legal hypocrisy of Prohibition, and treated slightingly.
.
. 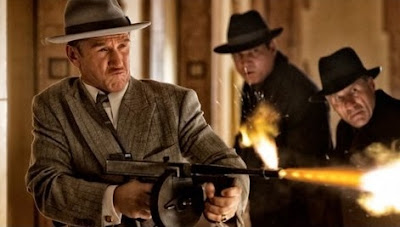 A hail of bullets
.
Gangster movies were more ‘political’, relating their subject matter more directly to contemporary concerns – the stock market crash and the Depression. The failure of honest hard work and saving to bring security led to the popularity of the genre in a society disillusioned with the American way of life. That is perhaps why the genre became so popular in an era when the Western was very much in the doldrums (it did not revive as a serious adult A-picture till 1939). Westerns do sometimes make reference to ‘contemporary’ issues, the Johnson County War, for example, or the prepotency of the railroads, but these are vague references, more nods really, and the real story is about an individual doing what a man’s gotta do. And they do not question the basic rightness of the all-American way of life. Gangster films tell of urban corruption and the death of the ‘hero’ while Westerns (at least until the revisionist 1970s) can be read as an American success story and the march of progress.
Interestingly, actors never seem to be really comfortable in both genres. The likes of Cagney and Bogart did the occasional Western but were most unconvincing, and similarly Western stars didn’t quite fit as gangsters. There were exceptions: Edward G Robinson was in five Westerns and not at all bad in them (though always playing an urban/Eastern character). Alan Ladd was known as a hard-boiled sort in crime movies (in fact I think he was better in them than in Westerns, Shane notwithstanding). But generally the two were like oil and water.
.
. 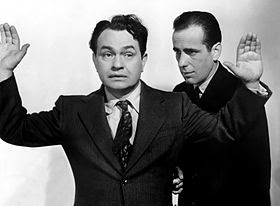 .
Writers, though, can sometimes move easily between the two genres. Think of famous criome writers like Robert B Parker or Elmore Leonard. They both wrote splendid Westerns.
.
.
One thing the two genres share: examples of both are still being made despite all predictions of their demise. Luckily.
And I shan’t mind if you occasionally skip a Western in order to watch a gangster movie. Don’t tell anyone but I’ve even been known to do that myself.