Adiós, Sabata, also known as Indio Black, sai che ti dico: Sei un gran figlio di…, which we might translate as Indio Black, you know what? You’re a great son of a …, is of only passing interest because of the weird and wonderful firearms that litter it and the appearance, ten years on from The Magnificent Seven, of Yul Brynner. Otherwise it’s just another interminable spaghetti western of little discernible merit.
For those who care about these things, after the success (in spaghetti terms) of Sabata with Lee Van Cleef in 1969, two hasty rip-off unofficial sequels followed and, annoyed, producer Alberto Grimaldi and director Gianfranco Parolini (under the name Frank Kramer) decided in 1970 on their own ‘official’ sequel. In a curious reversal, Van Cleef was back in the States taking Brynner’s part of the leader of the magnificent seven in a weak sequel, and Yul returned the compliment by coming to Spain to take over as Sabata in this sequel – whether it was weaker than the original may be in some doubt as they were both dire.
We are in the Mexico of Maximilian, 1867, and the baddies are cruel Austrians oppressing the locals. Gringo Yul is down there fighting for Juarez. I think Mongolians from Brooklyn are clasified as gringos. It was 1970 and Yul appears in a flared and fringed black costume all ready for the disco dancing craze about to get under way. He seems straight-faced about it, though. In fact he is stony-faced throughout, trying, perhaps, to give some weight or gravitas to a terminally silly script.
.
.

Ready for the disco
.
I can’t really be bothered to describe the plot in detail to you. It is in any case far too convoluted and badly-written (Parolini with Renato Izzo). The film is unconscionably long and seems interminable. Its 104 endless minutes could and should have been cut by at least a third. At least the good old bad B-Westerns of yore only came in at about an hour. It’s some daft story about gold (obviously) and everyone trying to steal it (even more obviously). There are a couple of scenes ripped off from The Wild Bunch when they discover the sacks they have stolen do not contain gold and when a bridge is blown up to avoid pursuit. 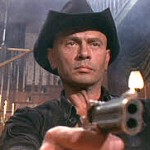 The only good thing about the movie really is the very high derringer quotient. They all have them. There are some top-hatted henchmen in black, and they use derringers, and various other characters fire them too. You know how besotted with derringers I am. As for Yul, well, he has loads of them, including a triple-barreled one. Naturally he still manages unerring marksmanship with them across a crowded saloon.
There are also many other WMD, including several Gatling guns, nitro (which Yul carries around the range in his saddlebags, doh) and a curious sawn-off proto-Winchester he wears, Josh Randall-style, in a holster, with a magazine of cartridges and a cigar in the last slot, which is quite groovy, I suppose. Sadly, the movie is not listed on the Internet Movie Firearms Database so we don’t get an expert assessment of what these guns were. Maybe they were just invented. A certain Giuseppe Mattei is credited as being in charge of firearms on the film. Perhaps we need to ask him.
.
. 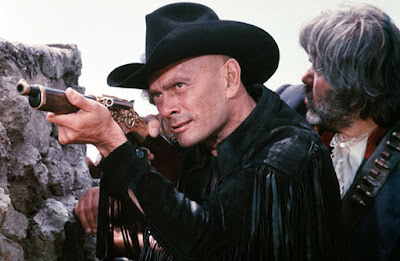 Fancy rifle or carbine
.
There’s an evil Austrian colonel with a monocle (Gérard Herter). The director/writer has given him the 1912 Rodolfo Fierro atrocity of shooting Mexicans who have been allowed to run away for the purpose. He also assassinates a minion with the lethally loaded cannons of a model ship.
.
.

Evil colonel
.
Dean Reed is in it and as you may know he had an interesting career. It’s perhaps worth quoting the IMDb bio of him:
Dean Reed was born September 22, 1938, in Denver Colorado. He went to Hollywood where he signed a record contract with Capitol Records in 1958, but his third single, “Our Summer Romance” was so popular in South America he went to tour there. More popular than Elvis Presley, he stayed to enjoy his incredible fame in Chile, Peru, Argentina. He made albums, starred in movies and had his own television show in Buenos Aires. He was known as Mr. Simpatia because he worked free in barrios and prisons and protested US policy, nuclear bomb tests etc. His politics moved to the left but he never joined the Communist party. He was deported from Argentina in 1966 and ended up in Rome, where he made “spaghetti westerns” for several years. He made his first concert tour of the Soviet Union in 1966 and became a mega star there and in Eastern Europe. He continually got into trouble with US State Department for protesting Vietnam War and attending International Peace Conferences. He moved to East Germany (GDR) in 1973, made numerous albums, starred in several films, and wrote and directed his own. His last visit to the States in late 1985 encouraged him to dream of making a career for himself back home, especially if he could return with his current project in hand, a movie about the war between AIM and the FBI at Wounded Knee, 1973. A GDR/Soviet Union co-production, the film had taken years to get off the ground. Just days before shooting was due to start in the Crimea, Dean Reed’s body was found in the lake near his home outside of East Berlin. He had been missing for several days. Many close to him in the GDR suspected suicide; his family and friends in America believed he was murdered.
He appeared in eight spaghetti and Eurowesterns, 1968 – 75, then directed and starred in his own Sing, Cowboy, Sing in 1981, which I haven’t seen. Doubtless it was a masterpiece. In Adiós, Sabata (probably his most famous movie) he is the blond co-star of Brynner, a charming-rogue type who is after the gold for himself (as indeed they all are). He and Sabata are supposed to be cultured and they play a Schubert piece for four hands on an out-of-tune saloon piano. Reed either did his own riding stunt, in which case full marks because it was pretty impressive, or they had a stuntman who looked just like him.
.
. 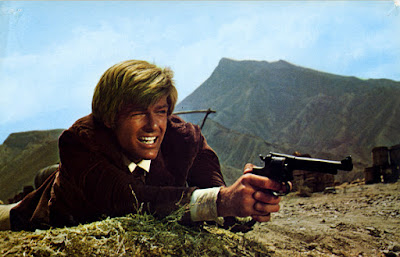 Reed
.
Spaghettistas will recognize the portly Ignazio Spalla as the equally roguish Juarista Esscudo and Gianni Rizzo as the sinister schemer in a suit (also large). They were both in the original Sabata with Lee and you often see them in junk spaghettis.
There are the obligatory acrobats – spaghettis had to have these, for some reason.
The music (Bruno Nicolai) is pretty bad, as usual, with much whistling. It’s annoyingly repetitive.
It’s shot in Almeria and Lazio, with interiors at Cinecittà, so par for the course.
The ‘heroes’ escape a firing squad and there’s quite a good bit where the evil Austrian colonel dies behind his portrait. It ends with a mixed spoken/read screen as Reed calls the others “Sons of …”.
.
.

Fill in the dots
.
For those hooked on the genre, Sabata came back for a third (official) outing in 1971, The Return of Sabata, and it was Lee again. I suppose Adiós, Sabata is no worse than other spaghettis but what kind of credit is that? Verging on the unwatchable, you might just give it a go, once, for Yul and the guns, but yul probably regret it. 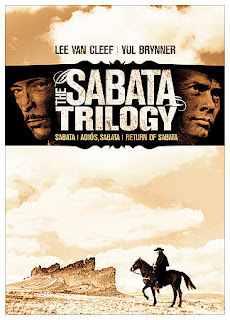 For the masochists
PrevPreviousMasterson of Kansas (Columbia, 1954)
NextOnce Upon a Texas Train (CBS TV, 1988)Next

PrevPreviousMasterson of Kansas (Columbia, 1954)
NextOnce Upon a Texas Train (CBS TV, 1988)Next
Jeff Arnold © 2022 – All rights reserved – Designed by BetterCallChris
Scroll Up