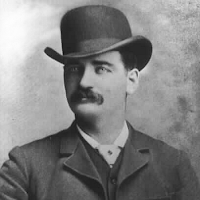 Bat Masterson has appeared many times in Western movies and TV shows,
impersonated by a host of actors – Albert Dekker, Randolph Scott, Monte Hale, Frank Ferguson, Kenneth Tobey, Joel McCrea, to name but a few, and, famously, on TV, Gene Barry. Most of these portrayals were pretty phony but few have been as implausible as George Montgomery’s Bat in Masterson of Kansas. I know you have to make allowances and not expect any historical accuracy in this type of Wstern but jeepers, you really do have to make allowances on this one.

The casting was very much on the not quite great side. George Montgomery had done B-Westerns for years, appearing in Gene Autry and Roy Rogers oaters, and had first led in one as Lassiter in the 1941 Riders of the Purple Sage. He got a break as Philip Marlowe in Fox’s The Brasher Doubloon in 1947 but blew it with a pallid performance and so it was back to the Stetson and sixgun. He was Jack McCall, Desperado in 1953, which if possible was even phonier than Masterson. He did have sometyhing in Westerns, being tall and granite-jawed and all, but I don’t think he ever got too hopeful when Oscar time came round again. .
As for the other actors, they were pretty bland. Bruce Cowling as Wyatt Earp had had small parts in Westerns (including Montgomery ones) but was pretty well unknown, and Donald Murphy as Virgil Earp only did three Western movies and some TV shows (including episodes of Bat Masterson). They are pale and forgettable Earps, and the low-grade writing anyway relegates them to supporting roles.
They all look silly now in their 50s pants and ridiculous two-gun rigs. Masterson in this one is ‘sheriff of Dodge’ while Wyatt (Bruce Cowling) was sheriff but is now “a federal marshal”. Virgil (Donald Murphy) is reduced to a minor-character obedient deputy. The picture’s sole asset is James Griffith as an entertaining Doc Holliday.
.
. .
As we know, in Dodge in the 1870s there was a Ford County sheriff (Masterson for a time) and a town marshal (Bat’s brother Ed for a time) with Virgil and Wyatt, among others, acting as deputies or assistant marshals at one time or another. Still, I’m not one to blame a Western movie for being unhistorical, not unless it claims to be historical.
Despite the dire Douglas Heyes screenplay, Griffith (below) is a good Doc. He manages to transmit murderous menace and cynical don’t-give-a-damn, with a hint of charm (very little) and a soupçon of tragedy. I always thought Griffith was a much better actor than many of the parts he took on warranted. Holliday has come to Dodge from Tombstone, so the chronology is out of kilter, despite being posted by Sheriff Bat, and the movie opens with a stupid Masterson vs. Holliday walk-down, and a lethal quick-draw gunfight between them being stopped at the last moment by Wyatt Earp.
.
. .
At one stage Montgomery comes up with one of the stupidest reasons ever for his name, telling how he used to shoot bats for target practice when he was a boy. Who on earth comes up with this nonsense? Well, writer Heyes, I suppose. The director was William Castle and Mr Castle definitely has his fans. He was famous for low-budget horror movies and gimmicks of all kinds in both the production and the promotion of his films. He was under contract at Columbia in the mid-50s and with producer Sam Katzman (with Castle, left) did quite a few Westerns there, such mighty epics as Jesse James vs. the Daltons (with Griffith as Bob Dalton) and The Law vs. Billy the Kid (he liked vs. titles) with Griffith as Pat Garrett. Castle went for the lurid end of the Western genre, with even less respect for the historical niceties than was usual at the time (and heaven knows, there was already precious little).
It was Columbia so the production values weren’t rock bottom. Henry Freulich was DP (he did a lot of Westerns, several with Montgomery) and there were some very nice (if unKansan) Californian locations at Corriganville and the Iverson Ranch. It’s in Technicolor and the then-new 1.85 aspect ratio. There is bold and martial music from Mischa Bakaleinikoff (Columbia house composer and conductor who did loads of Westerns, including some of those excellent Bud Boetticher/Randolph Scott ones in the late 50s).
But when it comes down to it, Masterson of Kansas is very weak.
Jay Silverheels plays the belligerent chief of an unnamed tribe who threatens to kill Bat if their friend is executed for the murder of an army colonel, a murder he did not commit. Bat accepts this suggestion without demur.
The idea is that the ruthless cattlemen want the Indian reservation grasslands to fatten up their cattle before sale in Dodge, so they murder the colonel to stir up trouble with the Indians. Or something.
The chief villain is another unknown, William Henry, who had been the young lieutenant in the 1939 Geronimo but otherwise had had small parts in forgettable B and TV Westerns.
The villain uses his henchmen to whip up the townsfolk to a lynching, including one absurd moment when he argues that they shouldn’t wait half an hour till the legal hanging. Then he and his
cronies ride out for Hays City (spelt Hayes on a sign) through the Kansas mountains (you didn’t know Kansas had mountains?) via the small town of Quolari, which I thought was in Uttar Pradesh, India but appears to be between Dodge and Hays. However, they are driven off by Bat and Doc who use six-guns from a bluff about five hundred yards away from the posse and shoot them all. Oh dear.
.
. 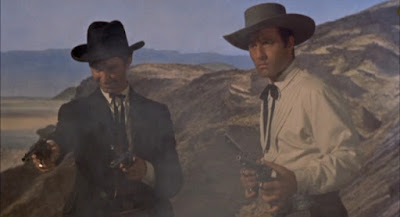 .
Doc is a doc, by the way, not a dentist. Luckily, because he patches Virgil up when he gets shot.
There a couple of dames, naturally, the respectable Amy (Nancy Gates, who would later be Randy Scott’s schmooze in Comanche Station) and the saloon gal Dallas (Jean Willes, ‘the other woman’ in many B and TV Westerns). Doc sets his Stetson at Amy but she has fallen for Bat and they ride off together at the end for the East where Bat, who has “laid down his guns”, will become “a famous newspaperman”.
.
. .
Bat bluffs one bad guy by saying he has a derringer under his hat but of course he hasn’t: the villain should have known that derringers are for louche gamblers and not very respectable saloon women, not for noble lawmen fighting for right.
There’s a final walk-down with Doc, Bat and Wyatt side by side, shooting down all the many bad guys  and not getting a scratch themselves.
Poor.
PrevPreviousRide Out for Revenge (UA, 1957)
NextAdiós, Sabata (PEA/UA, 1970)Next