Another lurid and historically silly Apache story came from the team that would the following year give us an equally absurd Masterson of Kansas, producer Sam Katzman and director William Castle. Written by DeVallon Scott, who had worked (with several others) on The Big Sky the year before, Conquest of Cochise has a complex plot which hinges on the idea (very common in Westerns) that the Indians are split into two factions, with a statesmanlike chief ready to deal with the palefaces and a firebrand group that prefers the warpath. It’s made much more intricate by the fact that there are two groups of Indians, Apaches and Comanches, and both are riven in the same way, and their enemies are too: the Mexican aristos have a wise party that wants peace and an Indian-hater who wants blood, and the white eyes have a noble cavalry officer who wants a treaty and a slimy town boss who foments discord for pecuniary gain. You see, I told you it was complicated.
.
. 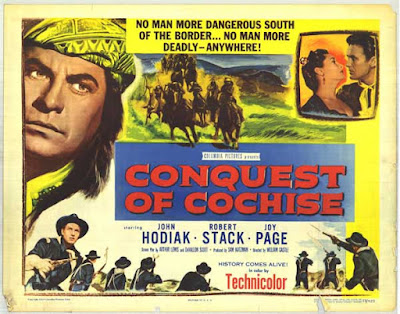 .
Cochise usually got a positive treatment from Hollywood. In 1950 burly New Yorker Jeff Chandler had portrayed him as a noble and wise chief ready to listen to reason in Fox’s Delmer Daves -directed Broken Arrow, and Chandler returned as Cochise in The Battle at Apache Pass two years later and yet again in Taza, Son of Cochise two years after that. In 1956 Broken Arrow became a TV show, with Michael Ansara being noble and peace-loving. Actually, even before the big-screen Broken Arrow, Jhn Ford’s Cochise had been statesmanlike and all-American in Fort Apache (1948). These screen Cochises were brave warriors, yes, but always ready to smoke the peace pipe. Conquest of Cochise continued in this tradition, with John Hodiak as the chief. 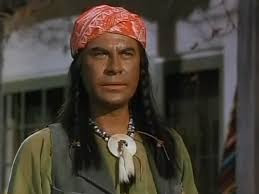 Hodiak (left) was one of those who in the 1940s filled a gap left by big stars serving in the armed forces. His early death in 1955, of a coronary thrombosis at the age of 41, meant that he did not become one of the really big Hollywood names and he was only in five Westerns: he was in the musical comedy The Harvey Girls in 1946 (if you call that a Western), then rather good as the Army captain opposite Robert Taylor in Ambush, an excellent movie, in 1950. In ‘51 he appeared with Clark Gable in MGM’s turgid Across the Wide Missouri and he finally topped a Western bill himself in two 1953 Columbia mid-budget efforts, Ambush at Tomhawk Gap, another Apache story (though Hodiak was a white man, not Cochise) and this one, Conquest of Cochise. He wasn’t bad, in general, but he makes a very unconvincing Cochise. 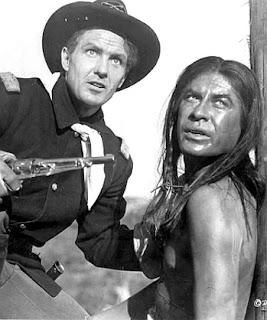 The shrewd and wise cavalry major who is his white-eyed counterpart is Robert Stack (right, saving Cochise from the Comanches). Like most people I think of Mr Stack as Eliot Ness but he had been at Universal since the 1930s. Badlands of Dakota (1941) was his first Western, and he only made six, generally eschewing the genre, even in its 1950s heyday. One of them was War Paint, another cavalry Western in which he was a heroic Army officer, the same year as Conquest of Cochise. Actually, he wasn’t bad and it’s a pity he didn’t do more oaters.
Conquest of Cochise was shot in bright Technicolor (the print is
still good today) by experienced Henry Freulich in mostly Vasquez Rocks locations (with, in the first reel, a little bit of Saguaro National Park by the look of it). Columbia didn’t stint on this. Castle’s direction is OK for the action scenes but the picture as a whole is on the clunky side, largely because of the lousy script.
We are expected to believe that there are forty thousand marauding Apaches on horseback in Arizona in 1853, firing 1894 model Winchesters.
There has to be a love interest, of course, so the writers invent a very silly romance between Cochise and a Mexican lovely (Joy Page). The crooked town boss would ideally have been Victor Jory or maybe, in ’53, Lyle Bettger, but it’s Robert Griffin, who is very forgettable. It’s a daft part anyway. Actually the adjective forgettable sums up most of the cast, and as for the story, would that it were forgettable. Unfortunately, it’s too idiotic for that. Really, Castle and Katzman should have stuck to schlock horror.
PrevPreviousFive Guns West (ARC, 1955)
NextIndian Uprising (Columbia, 1952)Next