.
Better than it ought to have been
. American Releasing Corporation (ARC) was the forerunner of American International Pictures (AIP), and both released independently-produced low-budget films usually packaged as second features. Their first movie was the 1955 The Fast and the Furious, and the B-Western Five Guns West later the same year was the second. Five Guns was made for the astonishingly low budget of $60,000. Even in the mid-50s sixty grand didn’t go very far. The eponymous armed men must have got hardly anything each. And the money had to stretch to color film, too. Second-feature B-Western or not, it was shot, by Floyd Crosby, no less, in Pathécolor.

It was directed by Roger Corman (right), one of the colorful figures of Hollywood. Corman had written The Fast and the Furious and became a leading light in ARC/AIP. Five Guns was the first of over 50 B-movies he would direct. IMDb’s biography of him says:
With hundreds of movies to his credit, Roger Corman is one of the most prolific producers in the history of the film medium and one of the most successful–in his nearly six decades in the business, only about a dozen of his films have failed to turn a profit. Corman has been dubbed, among other things, “The King of the Cult Film” and “The Pope of Pop Cinema” and his filmography is packed with hundreds of remarkably entertaining films in addition to dozens of genuine cult classics. Corman has displayed an unrivaled eye for talent over the years–it could almost be said that it would be easier to name the top directors, actors, writers and creators in Hollywood who DIDN’T get their start with him than those who did.
The top-billed stars of Five Guns are John Lund and Dorothy Malone. Nordic-looking Lund was a romantic lead with the likes of Olivia de Havilland and Marlene Dietrich but wasn’t really suited to Westerns. He appeared in a few of them, such as The Battle at Apache Pass, Chief Crazy Horse and White Feather, but it’s funny: blond men don’t suit Westerns somehow. Odd, that. The gorgeous Malone, equally blonde and usually described as “sultry”, won an Oscar two years later. She was very beautiful and a fine actress. Unlike Lund, she ‘did’ Westerns and she was quite an experienced Western hand by the time of Five Guns.
.
. 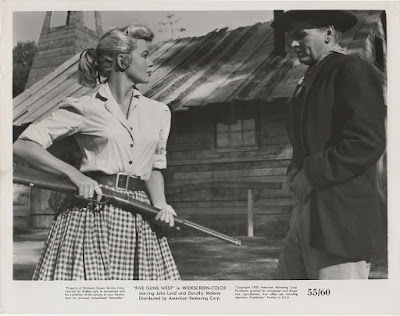 Malone and Lund doing their Baxter/Peck impressions
.
The other members of the cast, however, were slightly also-rans. You see, it’s a dirty dozen-type plot, with five renegades pardoned to undertake a Civil War mission on behalf of the Confederacy. The budget being what it was, they couldn’t even make the dirty half-dozen, so there were five gunmen. Lund is the self-appointed leader and the others are slick gambler Hale Clinton (Mike Connors), the Ben and Billy Thompson-ish Candy brothers, John and Billy (Bob Campbell, who also wrote the screenplay, and Jonathan Haze) and, the best actor among them, Paul Birch as tough old-timer JC Haggard. Birch was Mike Malone in Cannonball (one of my favorite series as a boy) and would be the original Marlboro Man. He’s excellent in Five Guns, despite the iffy script.
.
. The other four guns West, Birch (the best actor) standing
.
To be fair to both director Corman and writer Campbell, there is an attempt at character development, even if the plot is a bit on the hackneyed side. I think Corman and Campbell must have seen both Yellow Sky in 1948 and Rawhide in 1951. Malone plays a feisty girl with a cranky old uncle in a remote stage station and there were definite echoes of Anne Baxter’s performance in her part, and the idea of the stage station being occupied by bad guys while waiting for the stagecoach to arrive is more than a little Rawhide-ish. Sadly, though, Five Guns is not a patch on either of those noir Westerns. Still, considering its budget and scope, Five Guns West is rather better than it should have been, and you could watch it.