.
Worth seeing for Chill and Jack
.

High Lonesome ought really to have been a very good Western. Made in color with quite high production values, and starring quality Western actors of the caliber of Chill Wills and Jack Elam, it was written by Alan Le May. Now Mr Le May, as doubtless you are aware, was a leading light of the Western genre. He wrote two great novels which were made into great movies by great directors, The Searchers and The Unforgiven. He also wrote the source novel of the rather charming Along Came Jones, produced by and starring Gary Cooper, and wrote or co-wrote the screenplay of North West Mounted Police (also starring Coop), two Randolph Scott Westerns (adapting a Zane Grey novel for Gunfighters and using his own story for The Walking Hills) and two Errol Flynn ones (San Antonio and Rocky Mountain), as well as the little-known but rather fine Raoul Walsh work Cheyenne. It’s quite an impressive record for a writer.
.
. 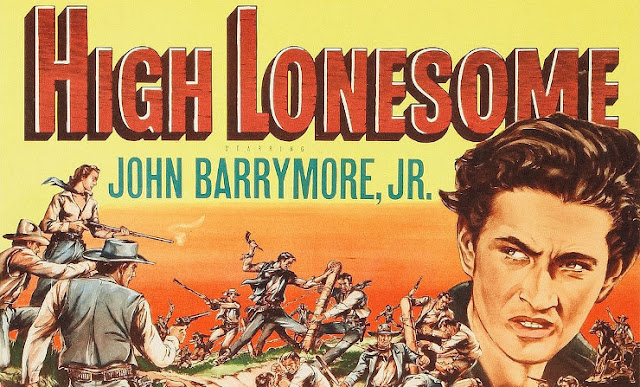 .
Sadly, though, as director (and High Lonesome was his only picture in that role) he didn’t have much of an idea. John Ford or John Huston he wasn’t.
The film was made and distributed by Eagle-Lion, an Anglo-American outfit set up by J Arthur Rank in 1947 when he acquired PRC Pictures (often referred to as Poverty Row Corp) but the movies they made and released were often above average in terms of quality. High Lonesome was produced by George Templeton, who was involved with Westerns from 1944, when he produced another Le May effort (also starring Wills and Elam), the 20-minute short Trailin’ West, until Sam Peckinpah’s The Ballad of Cable Hogue in 1970. So he knew the genre.
High Lonesome and its companion piece The Sundowners the same year launched the career of John Drew Barrymore, son of John and nephew of Ethel, who plays a neurotic and mysterious youth who apparently sees ghosts. Unsurprisingly, the Texas locals take him for a liar or madman or both. Barrymore had a tempestuous career marked by significant drug and alcohol use and he was an intense actor, let us say. These two pictures were his only big-screen Westerns and it was TV shows after that. He bore an uncanny resemblance to a young Sean Penn. Mr Penn was -10 when the film came out; otherwise I would have sworn he was in it.
.
. 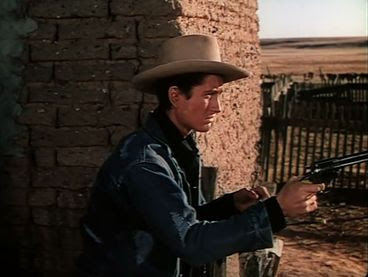 .
The late 1940s were of course the high point of noir Westerns and curiously perhaps the Technicolor does High Lonesome no favors. If it had been in black & white, shot by James Wong Howe perhaps, directed by Raoul Walsh, say, and had starred, instead of Barrymore, Robert Mitchum maybe, it could have been as good as Pursued or Blood on the Moon. As it was, it didn’t make that grade, despite some obviously classy writing here and there.
For it has a sinister tinge and the basic idea is that the troubled youth sees long-dead victims of an old Texas feud, shadowy figures whom none but he perceive. Of course we know there must be some rational explanation, as indeed there turns out to be, but meanwhile we can enjoy the apparent other-worldliness of the spectral gunmen. The poster contained the slogan Haunted! Hunted! Hounded!
The patriarch of the ranching Davis clan is Horse Davis, played by an austere and authoritative Basil Ruysdael, former bass-baritone at the Metropolitan Opera and then radio announcer, turned character actor who played generals, judges and doctors and the like, who appeared in seven big-screen Westerns. He wears no gun but has a stout walking stick and you feel that that would more than suffice. He has a beautiful daughter, Abby (Kristine Miller, a protégée of Hal B Wallis’s) and she is the fiancée of local rancher Pat Farrell, of the clan the Davises used to feud with, played by Western regular John Archer (below), in his fourth oater. Archer was born Ralph Bowman but won an RKO contract in the name of John Archer in a competition so went from being a Bowman to an Archer. However, the old feud rears its ugly head again and Abby and Pat go their separate ways.
.
. 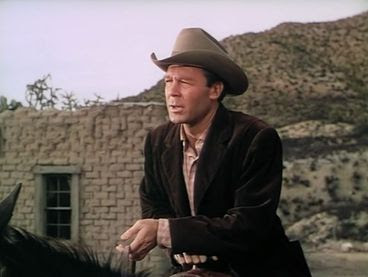 .
Meanwhile, the youth nicknamed Cooncat (Barrymore) takes a shine to Abby’s younger sis, Meagan (Lois Butler, in her only Western) – or rather she takes a shine to him. He seems rather bewildered at the idea.
.
. 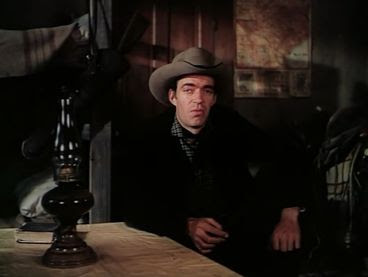 .
The good news is that the mysterious and to most people invisible gunman is Jack Elam (above), billed simply as Smiling Man. He smiles in that pitiless, cruel way that villains adopt. He has a henchman whom he bosses about unmercifully (Dave Kashner, former cattleman and a trick whip artist, a superb portrait of whom is below). Elam was in the early stages of his career and for some time to come was to take minor roles as henchman himself – ‘Knife murderer (uncredited)’, for example – and was to get a name as One-Reel Jack because of his propensity of being shot to death before the second reel of the film had begun. But here he has a key role (even if only appearing intermittently) as the main bad guy. And he doesn’t get shot till the last reel. How I love Jack Elam, one of the best baddies ever.
.
. 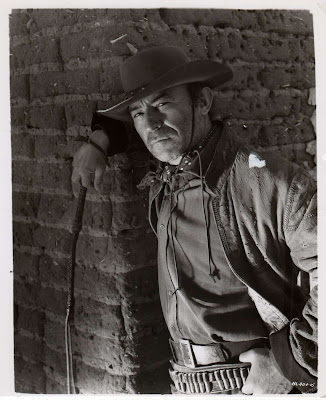 .
Chill (he’s the Davises’ foreman) calls the square dance and then sings a song (he had a fine voice). There’s a good bit where Chill and Meagan choose a hat for the boy. They take some time before arriving at the right item and the importance of the hat in Westerns is the subject of profound and philosophical investigation (hem hem) on this blog, which you can read here. 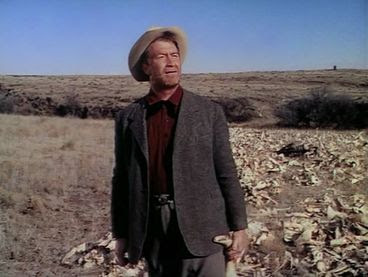 .
At one point someone asks the youth who he thinks he is, Billy the Kid? And at another point, Abby asks, Who do you think I am, Calamity Jane? So there are plenty of references. They don’t help to date the action, though. The characters wear rather 1950s clothes and hair, especially Barrymore who is clearly going for a James Dean vibe – a vibe intensified by the fact that the Big Bend country the film was shot in was the same as the setting for Giant.
There are a couple of good Le May lines, such as when Meagan says that men don’t fight about a reason. They fight about they got in a fight. That’s true as often as not, I reckon.
Do watch High Lonesome. You’ll probably enjoy it. It’s not The Searchers or The Unforgiven but it’s not bad either. 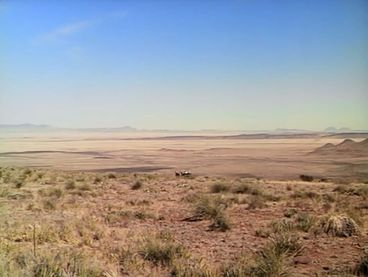