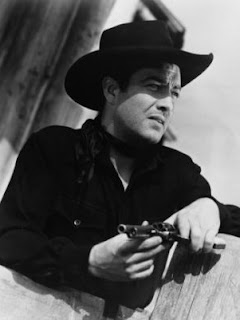 I know Robert Taylor is probably more usually thought of as an MGM leading man in wartime romance-dramas or in the legendary Middle Ages but in fact he grew up on the plains of Nebraska, rode well, loved the West and always wanted to be in Westerns. He had been Billy the Kid  in 1941 but really started to concentrate on proper films (Westerns) in the 1950s. In the early 50s Westerns like Ambush and Devil’s Doorway (both 1950) were really classy and in the case of Westward the Women (1951) great. There followed Ride, Vaquero!, Many Rivers to Cross (weak, and hardly a Western at all), and The Last Hunt. At the end of the decade we had The Law and Jake Wade, Saddle the Wind and The Hangman (Taylor’s first non-MGM Western). It was a very good saddle-and-sagebrush CV. By the 1960s, however, he was showing his age – he was 52 in Cattle King and despite suspiciously black hair looked older. He wasn’t well. A chain smoker, he was to develop lung cancer and die in 1969.
Taylor is the big rancher of the title, a little as he had been in Saddle the Wind. Hollywood liked titles like Cattle King or Cattle Empire (that one had Joel McCrea as the Emperor). Barbara Stanwyck was the Cattle Queen of Montana. Rich cattlepersons are often the baddies in Westerns, acting arrogantly against the interests of the brave small homesteader. Here too, the small ranchers are generally the good guys. However, just for a change, local cattle king Sam Brassfield (Taylor) is decent, honorable and more than half on their side – like rancher Donald Crisp in Saddle.
.
. 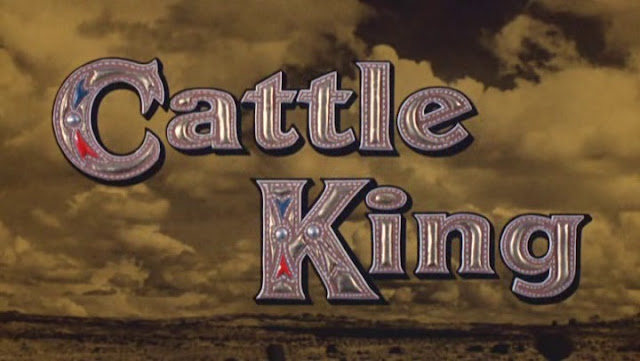 .
The real villain of the piece is a perfectly splendid Robert Middleton as Big Clay Mathews. What a good Western actor Middleton was! He handled besuited badman roles especially well. He was famous as a non-Western screen villain in the likes of Desperate Hours, The Court Jester and as Edwin Stanton in The Lincoln Conspiracy, his last film role (he passed away the same year, 1977) but he also did a large number of big- and small-screen oaters from the mid-50s on, starting with a 1955 episode of Gunsmoke and a part as a very improbable Charlie Siringo in the Elvis Western Love Me Tender in ’56. Watch him as Rufus Henshaw in Red Sundown (he was the ruthless rancher in that one), as horse theft maestro Dutch George in a 1956 episode of Gunsmoke, as the smiling but bad outlaw pal of Jack Palance in The Lonely Man, as one of Richard Widmark’s outlaw gang in The Law and Jake Wade (also with Taylor), or indeed in any number of other roles. He was superb as the Clantonesque Charlie in Day of the Badman with Fred MacMurray. He was always terrific. He doesn’t let us down here as the hefty (he was never slim) rich man who will stop at nothing to get his way and bring Brassfield down.
.
. 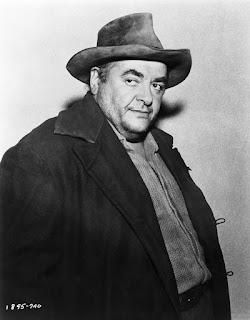 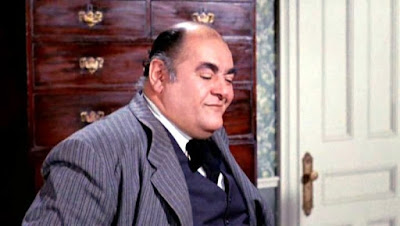 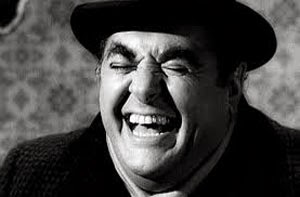 The splendid Robert Middleton
.
Cattle King is an early 60s Western but in many respects it’s a 1950s one: it’s played straight in the classic tradition. The Brassfield part could have been taken by James Stewart, Gregory Peck, Henry Fonda or a number of other Western leads of the time. But Taylor does it really well, bringing the right degree of Western grit and decency to the part.
.
. 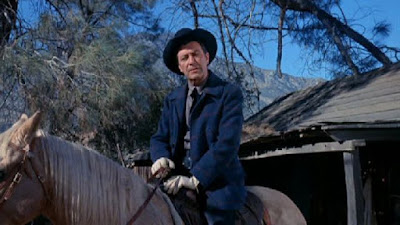 Tough but decent cattleman
.
He is well supported, notably by Ray Teal as his foreman Ed (I have always been a great Teal-ist) and a young Robert Loggia, rather good as a firebrand Mexican top hand on Brassfield’s Teton Ranch (it’s a Wyoming story). Larry Gates has a prominent part and is rather presidential as Chester A Arthur (he would be President again, Hoover this time, in Backstairs at the White House on TV). President Arthur comes out to Wyoming to visit Yellowstone and avert a range war at the same time if he can. He and rancher Brassfield bond.
.
. 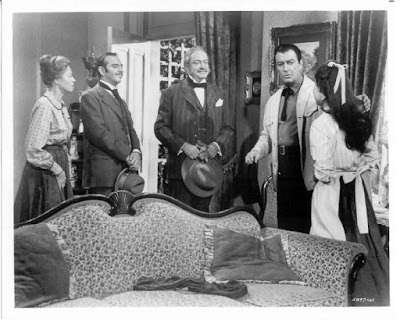 The President drops in for dinner
.
I also thought Malcolm Atterbury was terrifically good as the cantankerous but gutsy homesteader Abe Clevenger. It’s a memorable part. Atterbury was a regular of TV Western shows but also often featured in feature films, from Man Without a Star in 1955 to Cattle King in ‘63 – his last, more’s the pity. I remember him especially in the Audie oater Hell Bent for Leather (Middleton was in that one too).
.
. 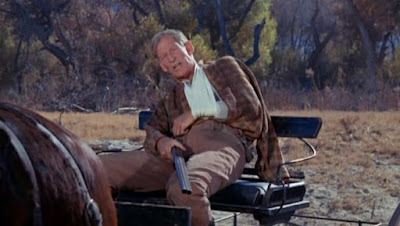 Atterbury excellent as homesteader Abe
.
Joan Caulfield as Sharleen, Brassfield’s fiancée (who has rather bright scarlet lipstick for 1880s Wyoming ranch life but never mind), Virginian Christine as Ruth, the foreman’s wife who runs the home, and Maggie Pierce as Brassfield’s niece June all are adequate-to-good. I especially liked the way Ruth reprimanded the President for not wiping his boots before entering. 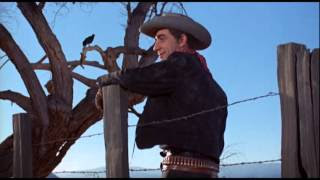 The weakest link, sadly because it was a key part, was Richard Devon as the Texas gunslinger Vince Bodine, hired by villain Middleton to kill Brassfield’s crew and otherwise do his dirty business. Characters with names like Bodine or Bodeen were usually evil gunslingers, I don’t know why. But watch out for them. Ten to one men with -een names will be baddies. However, where it needed a real toughie for the role, Leo Gordon maybe, or Robert J Wilke perhaps, Richard Devon was a TV actor who had bit parts in a few big-screen Westerns. He was unconvincing in a key part in Cattle King, looking, as one reviewer has said, “like an accountant in costume”. 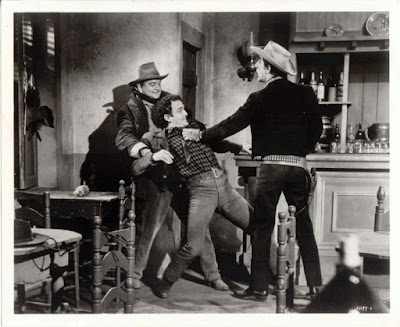 Bodine does Middleton’s dirty work
.
The MetroColor is bright and the picture quality on my DVD good. There are some nice (Californian) location shots (DP William E Snyder, of The Man from Colorado fame). There’s nice Paul Sawtell music. The movie was written by Thomas Thompson, also credited as an associate producer (his only film as such). Thompson was a TV writer (especially of Bonanza and Temple Houston) and only wrote two feature Westerns – the other was the screenplay for another Robert Taylor Western, Saddle the Wind, in 1958. The script for Cattle King isn’t bad, in fact.
.
. 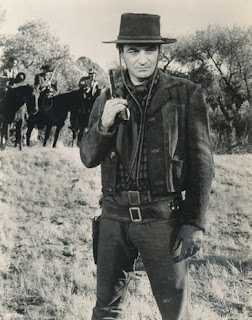 Loggia likes women and fighting
.
The ensemble was directed by Tay Garnett, probably most famous for A Connecticut Yankee in King Arthur’s Court and the 1946 version of The Postman Always Rings Twice, but not really known for Westerns – in fact I think Cattle King was the only big-screen Western he directed. He does a fair job, it must be said, and the picture moves along at a brisk trot, with some good action scenes – the final showdown is well handled.
I quite like this movie. It’s no great Western, and it’s certainly not Robert Taylor’s finest, but it rattles right along in a 50s sort of way and is enjoyable. You could certainly watch it. 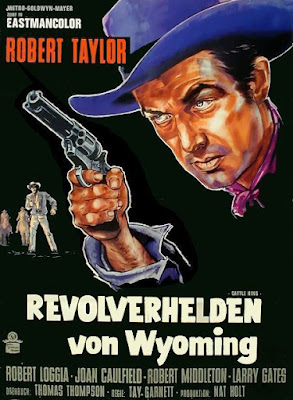