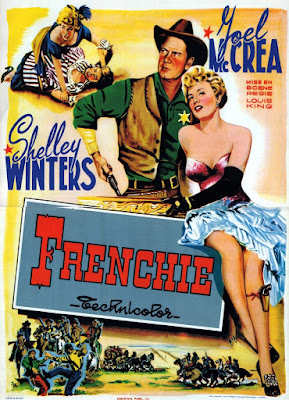 The Destry story was popular at Universal. Most famously, James Stewart and Marlene Dietrich had been Tom Destry and Frenchy in 1939’s Destry Rides Again, itself a remake of the studio’s 1932 Tom Mix talkie of the same title – although the story is different in that one. Even the 1932 one bears little resemblance to the original 1930 Max Brand magazine story, Twelve Peers (see index) whose Harry Destry does indeed wear guns, though he is reluctant to use them. The ‘Again’ part of the Tom Mix title was odd as Destry had never ridden on screen before. In 1954 George Marshall, director of the Stewart/Dietrich one, would make it again, in color, as Destry, this time with Audie Murphy and Mari Blanchard. It would be very similar in many ways. But in between the 1939 and 1954 versions came yet another, Frenchie, with Joel McCrea and Shelley Winters doing the honors. And then in 1964 Destry migrated to TV with John Gavin in the title role. So that’s quite a lot of Destries.
Frenchie was not avowedly a Destry remake. It had a different director (Louis King, brother of Henry) and the hero is Sheriff Tom Banning (McCrea), not Destry. It is certainly different in tone from the ’39 and ’54 ones, being less an overt comedy Western, with fewer Marshall belly laughs, and played straighter. But it’s Destry alright.
It was written by Oscar Brodney, known for having worked with Stewart on Harvey and The Glenn Miller Story but not really for Westerns. Felix Jackson had done the 1939 one and DD Beauchamp the 1954 one so this was a departure. There are some goodish lines (I like it when smarmy Paul Kelly says he’ll be seeing Frenchie again soon and she replies that she’ll be listening for his rattles) and it’s quite interesting the way McCrea’s character starts off gunless, contrasted with Winters’s character using her pocket pistol and as the story develops the roles are reversed. 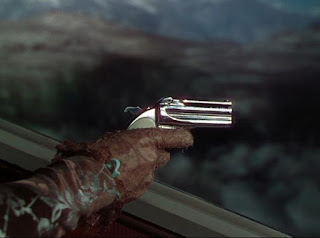 The best thing about Frenchie is that it’s a two-derringer
picture. Well, actually it’s the same derringer but first Shelley’s Frenchie uses it on the stagecoach, then, in a rather saucy bit, in the saloon Joel reaches under her skirt and draws it from her garter holster to get the drop on the bad guy. Derringers always add to a Western. Mind, it’s rarely the hero who uses one. Usually it’s a saloon gal (such as Frenchie) or a gambler or a no-good crooked town boss, Victor Jory maybe. But enough of derringers. Let us return to Frenchie.
One of the differences is that Frenchie comes to Bottleneck to get revenge. The opening scene shows her as a little girl and her dad is shot in the back and killed by his crooked partners. She grows up, becomes a madam in a New Orleans ‘gambling house’ (euphemism) and when she has made her pile arrives in Bottleneck to get vengeance. She knows who one of the villains is. It’s saloon owner Pete Lambert (Paul Kelly) but who is the other partner, Lambert’s accomplice in the murder of Frenchie’s pa?
She buys the moribund Scarlet Angel saloon from owner Dobbs (Frank Ferguson), does it up and sets up as rival to Lambert.
.
. 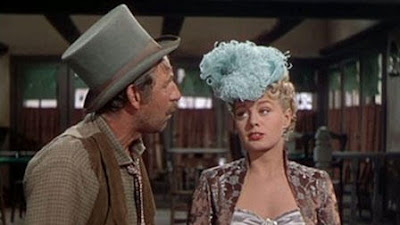 Frank sells her his saloon
.
She has met the pacific Sheriff Banning on the stage. He showed a dislike for guns, even when the stage was pursued by bandits, and appropriated Frenchie’s derringer to prevent her using it. Banning becomes a sort-of friend, whittling in the saloon, despite his respectability and the townsfolk disapproving of her and her saloon.
We meet banker Clyde Gorman (John Emery) and his wife Diane (Marie Windsor) a former flame of the sheriff’s. The plot thickens.
.
. 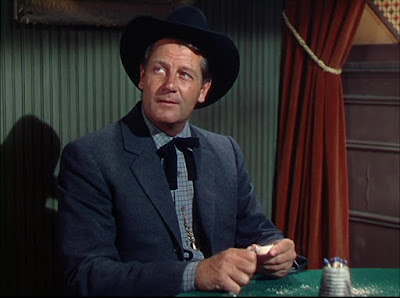 McCrea. Fine actor.
.
The acting is very good, in fact. McCrea was a fine actor in a quiet way and always top notch in Westerns. I’m not a great fan of Ms Winters in Westerns. She was in seven and never really convinced in them, being more suited in my view to gangster-moll roles. The same year as Frenchie she was in Winchester ’73 (with the previous Destry, Jimmy Stewart) but had a rather supernumerary part in that. In Frenchie she was already rather, ahem, ample of frame, an aspect made more noticeable, not less, by her very tight gowns. Still, she was bright and amusing as Frenchie Fontaine and she tries for a Mae West vibe. Mae West herself had of course done a Western, My Little Chickadee, back in 1940, also for Universal, but she didn’t get on with co-star WC Fields, there was no spark, and the movie was rather a dud. Shelley Winters carries this one off with more sparkle.
.
. 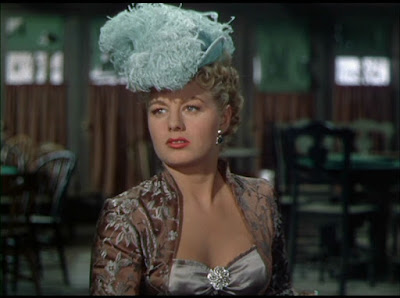 Doing her Mae West act
.
But the support acting was very good. 3rd-billed Paul Kelly made a very good Western villain. Kelly had served time for manslaughter after a fistfight with his lover’s husband led to the man’s death. In films he was usually a tough cop or sadistic bad guy. He didn’t do many Westerns, more’s the pity, but he was a memorable villain in Springfield Rifle with Gary Cooper and San Antonio  with Errol Flynn. He’s excellent as the ruthless and crooked saloon owner rival to Frenchie.
.
. 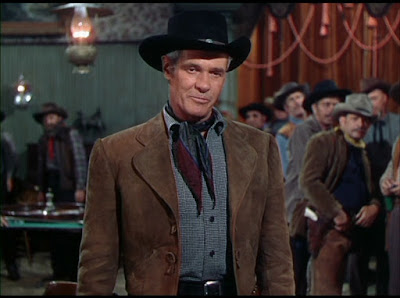 Kelly a good bad guy
.
Good old Marie Windsor plays ‘the other woman’, Diane, the sheriff’s former girlfriend now married to the banker. I always thought she was good in Westerns, though usually consigned to B-movies
and best known for gangster flicks and noirs. She was in a great many bigscreen and TV Westerns from 1947 to 1975 and was always good. 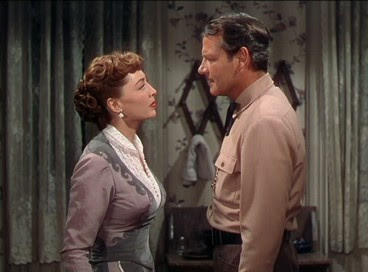 Marie still loves him but she made the wrong choice
.
Then Frank Ferguson as Frenchie’s saloon manager was always good value. He was never bad in a Western. John Russell is there too, as Frenchie’s slick gambling boss who really loves her. He has a perfectly splendid hat. Paul E Burns is entertaining as the comic relief old-timer Rednose. Chubby Johnson is an (uncredited) miner, Jack Perrin is an (uncredited) voting clerk and Hank Worden is the assayer. It’s a good line-up.
.
. 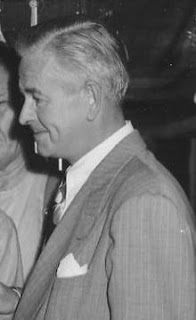 Louis King
.
Louis King certainly did not have the talent of his brother Henry. He directed a lot of children’s films and B-Westerns for various studios, doing mostly TV work in the 50s, especially The Deputy and The Adventures of Wild Bill Hickok. Powder River (1953), a sort of poor man’s My Darling Clementine which is, though, a decent Western, with Rory Calhoun, and Frenchie were about his best big-screen oaters. He didn’t do badly on Frenchie. It rattles along.
.
. 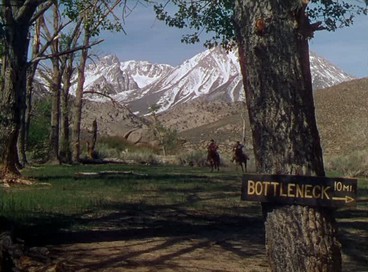 Some lovely location shooting
.
It’s in bright Technicolor and there are some really lovely Inyo locations shot by Maury Gertsman (28 Westerns). The print I have is a Sidonis DVD, very good quality. The series has annoying subtitles you can’t turn off, a lousy catalogue you can’t search unless you know the French titles and very poor extras in the shape of meandering waffle from Patrick Brion and (especially) Bertrand Tavernier – perfectly dreadful. But as I say, the picture quality is very good.
.
.
.
I like this Western. True, I am a Joel fan so I would be bound to, but actually I think anyone would find it pretty good. Even without the derringer. 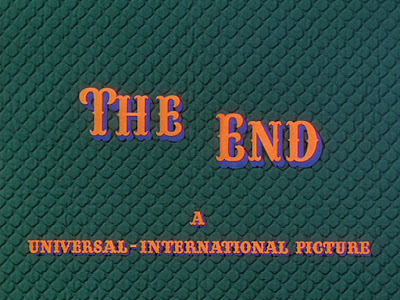