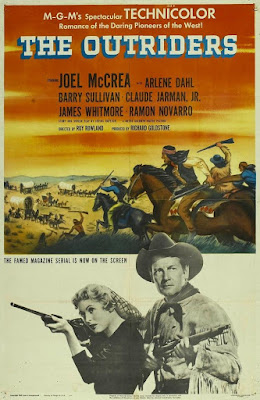 Three Joel McCrea oaters came out in 1950, four if you count Stars in My Crown as a Western. They weren’t the big epic Westerns of his pre war career like Wells Fargo and Union Pacific. They were smaller-scale than that. But they were still good. McCrea was an excellent Western actor.
The Outriders was written by Irving Ravetch, of Hud and The Cowboys fame, and directed by Roy Rowland, who married the niece of Louis Mayer and, quite coincidentally of course, was promoted from script clerk to directing. This was only his second Western, after the stunning success (not) of the Van Johnson epic The Romance of Rosy Ridge, about which I shudder to talk. Still, he seems to have done a competent job with Joel. The action scenes are well staged.
It’s a Civil War story, like South of St Louis the year before, with three Reb soldiers (McCrea, Barry Sullivan, James Whitmore) escaped from smallpox-ridden Fort Benton, Missouri prison camp in 1865. After being rumbled by farmer Russell Simpson (Joel says he was a Union soldier at Pittsburg Landing, unaware that the Yankees call it Shiloh), they stumble upon evil Jeff Corey, a Quantrillesque guerrilla leader out for his own ends, basically a bandit. Corey makes them an offer they can’t refuse: they are to go out West and expropriate $1 million in silver (or was it gold, I forget) being transported from Mexico.
.
. 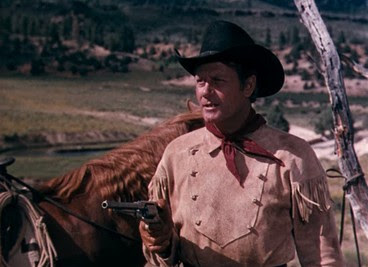 Good man Joel
.
One of the three is a sergeant, a decent man with scruples – no prize for guessing who took that part. Another is a bloodthirsty type, Jesse (not James but) Wallace – clearly meant to be a Jesse James-ish figure, and he is played by Barry Sullivan. And the third is the slightly Walter Brennanish old-timer role, James Whitmore, on Joel’s side when the going gets tough. This was only Sullivan’s third Western (after The Woman of the Town and Bad Men of Tombstone) and was a full decade before The Tall Man on TV. I was never a great Barry fan but he’s OK, I guess, as the homicidal and basically bad-egg compadre of Joel. Whitmore is entertaining, as he usually was.
.
. 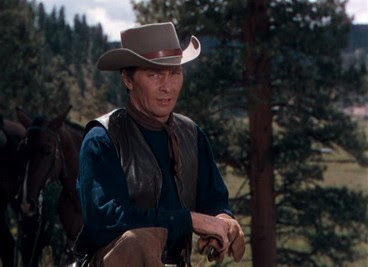 Bad man Barry
.
There’s a Route 66 moment as a voiceover recounts all the places they travel through to get out West, and then they get to Santa Fe and join up with the wagon train carrying the bullion (hidden under hides). The boss of the train is Don Antonio (good old Ramon Novarro) and he has, naturally, a beautiful woman among his charges (all wagon trains did in them days; I think it was compulsory), Mrs Gort (Arlene Dahl, who was indeed very beautiful and who earlier the same year did another Western, also for MGM, the rather good Ambush with Robert Taylor). Obviously – and we see it coming a mile off – Joel and Arlene will get it together.
.
. 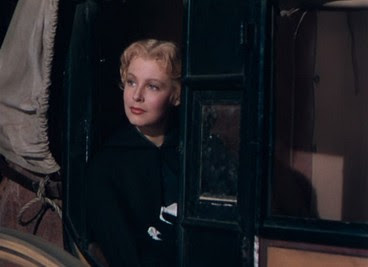 Very beautiful
.
Mrs Gort has a young son, Roy, played by Claude Jarman. Jarman was a talented actor and would be absolutely superb as John Wayne and Maureen O’Hara’s son in Rio Grande later that year but sadly he has too little to say or do in this one and cannot shine at all. He is soon sacrificed, drowned in a dangerous river crossing.
.
. 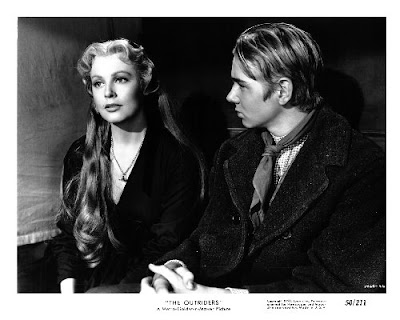 Jarman sacrificed
.
There are also Apaches and Pawnees to be fought off and much derring-do. Some nice Kanab, Utah locations are well photographed by DP Charles Schoenbaum, to the tune of stirring music by André Previn. However, the majority is shot on very obvious sound stages in the studio and this does detract from the epic sweep. MGM was always especially guilty of this.
.
. 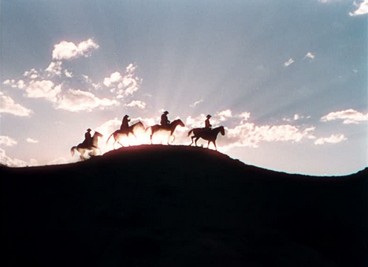 Fine photography
.
There’s a slightly Fordian dance scene with Joel sensuously putting green slippers on Arlene’s feet before waltzing her to a secluded corner of the studio. Daring stuff.
.
. 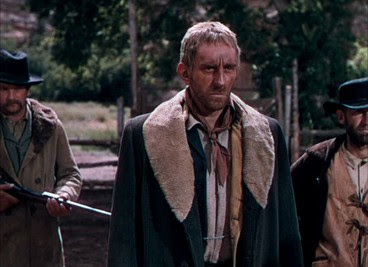 Quantrillesque Corey
.
It all comes to an action climax (I mean fighting with Corey’s guerrillas, not Joel and Arlene – please). The bad guys are vanquished and Joel gets the girl – no spoiler here.
It’s all a rather unoriginal but enjoyable Technicolor excursion out West, with plenty of gallopin’ and shootin’. Not Joel’s finest Western, by any means but you’ll enjoy. The best scenes are those between McCrea and Sullivan.
PrevPreviousThe Hangman (Paramount, 1959)
NextCheyenne Autumn (Warner Bros, 1964)Next