The not quite so magnificent seven
.
.
Now, before reviewing the new Magnificent Seven, I must declare an interest. You see the original has been with me ever since I first saw it on its release in 1960, when I was twelve, and I have watched it countless times since, never tiring of it, in various countries I have lived in, and I pretty well know the dialogue by heart in at least three languages. When I was a boy I thought it was the best Western ever made and very likely the finest film in human history, and I was probably right.
So how could a remake ever live up to that? Well, of course it couldn’t, and for me the new one, just seen on DVD, was a disappointment. Not that it was bad. It just wasn’t as totally brilliant.
Remakes can be OK, or even better than OK. I mean who now remembers the 1931 version of The Maltese Falcon? And Westernwise, the Coen brothers’ True Grit and the 50th-anniversary 3:10 to Yuma were very good efforts. But when you have so much memory invested in a film, pretty well any attempt to make it again is doomed.
Of course even the ‘original’ was a remake. We all know the story of how the plot of The Seven Samurai was, er, recycled. And, to be fair, this new Mag 7 is very different from the 1960 one.
Being the 21st century, we had to have a black actor in the Yul Brynner part, and they got Denzel Washington, so that was quite a coup. Fair enough. There were African-American lawmen in the old West, even if Hollywood has always pretty well ignored them. This leader of the seven is a sworn peace officer, you see, not just a freelance gunslinger like Chris. And the petitioner who seeks the help of the band for the beleaguered village cannot be a meek Mexican man but must be a feisty widow (Haley Bennett) with plunging neckline and a pistol on her hip. And of course the seven must include a Native American (‘Comanche’ Martin Sensmeier), an Asian-American (Byung-hun Lee, from The Good, the Bad, the Weird) and a Mexican-American or ‘Texican’ (Manuel Garcia Rulfo) too. So it’s ticking those PC boxes. The seven are still all male, mind.
.
. 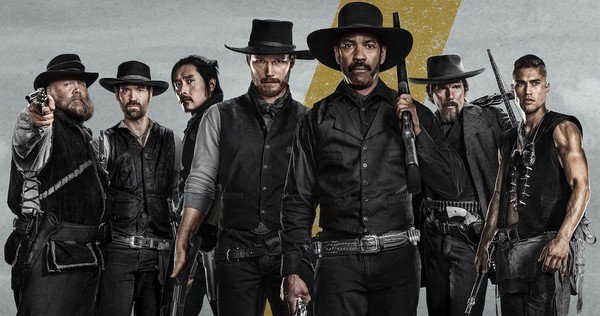 All in black, not just Yul
.
It is true that apart from Denzel the rest of the seven were pretty well unknowns (to me) but then we sometimes forget that in 1960 most of those seven were obscure young actors too. Charles Bronson would have been known to ardent Westernistas, they would have recognized Steve McQueen as bounty-hunter Josh Randall from TV, and Brad Dexter had done the odd oater,  but pre-UNCLE Robert Vaughn, James Coburn, and Horst Buchholz were unknown quantities to many.
By the way, I once won a night’s free drinking for my friends in a wine bar by accepting the bet of the landlord (foolish fellow, little did he know he had Jeff Arnold in his bar) that I couldn’t name all seven of characters from the 1960 movie and the actors who played them. He was rather crestfallen when I did. I went round the next day to apologize to the fellow (I think he had been fairly well oiled too) and met his wife, who was rather angry at how much alcohol we had got through. But as her husband decently said, a bet’s a bet. Anyway, where was I?
They got the rights to use the Elmer Bernstein music, though it was definitely underused, really just a quotation. Most of the score is by James Horner and much less stirring. Who can forget (well, I can’t anyway) the moment when Chris and Vin turn that hearse round and rattle back down the hill and the music surges in triumph? In fact that scene, among the very best in the John Sturges picture, is altogether absent from the new picture, sadly.
They re-used a couple of moments from 1960, though, such as the gun v. knife fight, but these scenes had little of the magic, I fear. Some of the 1960 dialogue pops up here and there too, such as Denzel saying he’d often before been paid a lot but never everything, or the man falling from a five-story building. There are some good new lines (Richard Wenk and Nic Pizzolatto). “I gotta family, Mister,” pleads one character. “They’d be better off without you,” says the villain. Bang. Or when one of the seven promises to use one-syllable words from now on and elicits the response, “What’s a syllable?” But some of the dialogue is anachronistic or wrong, such as when the woman from the village says she was the only one with balls enough to seek revenge, or someone says that “Statistically speaking…” or “It is what it is.”
As for the seven, Denzel has Burt Lancaster teeth which he flashes in the occasional crocodile smile, blinding all around. He is named Chisum or Chisholm (in the credits it says Chisolm) so that’s a good Western name.
.
. 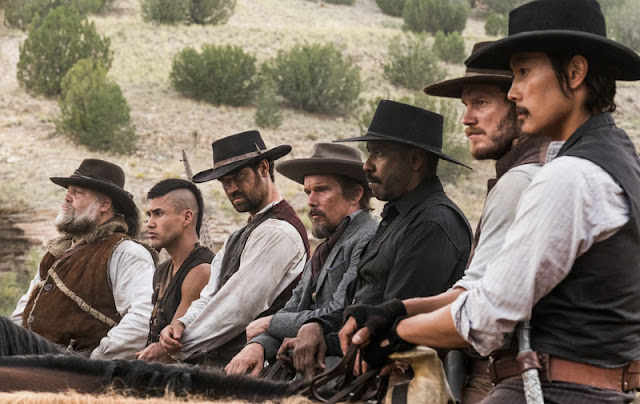 Not quite so magnificent
.
Ethan Hawke (I’d heard of him at least) was a character with another famous Western name, Goodnight, though that’s his first name apparently; he’s Goodnight Robicheaux. He’s alright, I guess. He is the pardner of the Korean chap, Billy Rocks, who is suitably adept with his knives.
The Vin character is named Josh (in-joke for Western fans) and is played by Chris Pratt, rather blandly, I thought. He does card tricks. He also has a mare’s leg cut-down rifle, for the cognoscenti.
Colorful was a sort of mountain man figure, Tom Horn I first heard, but it turned out to be Jack Horne, played by Vincent D’Onofrio.
And like the Korean fellow the Indian is suitably silent and lethally effective with his chosen weapon, the bow. He is named Red Harvest, presumably a reference to Dashiell Hammett’s story adopted by Kurosawa for another Japanese ‘Western’.
The Garcia character is supposed to be charming, though he rather spoils the effect by telling the woman that he is “Enchanté, mon cher.”
There is no ‘kid’ part as such and no love-interest in the village for the youngest one to fall for and remain there at the end of the battle.
This picture is more of a shoot-em-up than the first one, and the bad guy has far more than forty men (mind, in the 1960 picture too, though Calvera is said to have forty bandidos in his band, well more than forty are shot, should you be pedantic enough to count them, which I’m not, obviously). But this time they have dynamite and a Gatling gun so it’s a bigger and louder affair.
The bad guy was quite good. He is Bartholomew Bogue (Peter Sarsgaard) and he has a good entrance as he and his henchmen burst into the church where the townsfolk are gathered. He looks like Vincent Price playing Richard III on a bad day. He terrifies a child in the first reel, a sure sign of baddiness. Then he murders a man who protests and burns the church down. He really is very naughty. He is a corporate villain, not a roving bandit chief, and he argues that democracy equates with capitalism and capitalism is Godly, so anyone who opposes him must be an undemocratic heathen. Quod Erat Demonstrandum. The town, Rose Creek, is firmly in the US, not in Mexico. The idea of the hero(es) using guns to rid a treed town of its crooked boss is one of the oldest plots in the Western book but that’s OK.
It’s set in 1879 and there is none of the ‘end of the West’ tinge to the picture, or the sense that the gunslingers are dinosaurs doomed to extinction. In 1960, when the Western genre was in decline after the glory days of the 50s, it was common to have this theme, and the likes of Sam Peckinpah  continued it through the 60s with pictures like Ride the High Country or The Wild Bunch, introducing automobiles as symbols of the modern age which will render the horse obsolete. But The Magnificent Seven version 2016 is played ‘straight’ and harks back to the less self-doubting days of the horse opera.
The producer and director of the movie is Antoine Fuqua, known for Training Day (with Denzel) and for music videos. Surprising then that he didn’t make more of the music, though I suppose it wasn’t quite in the vein of Heavy D & the Boyz or Coolio’s Gangsta Paradise. Still, he does a competent job, I guess.
Like most Westerns these days it is high-class visually, this time with Mauro Fiore of Avatar fame photographing Louisiana and lovely New Mexico locations.
There are occasional references (Mr Fuqua says in the making-of part that he grew up with the Western). I thought the final show-down slightly Silverado-ish and there’s a rope-burn scar as has been done before. There’s almost a derringer. A pocket pistol anyway. There are the usual ridiculous credits which go on longer than the movie.
Curious that both MGM and Columbia should be responsibe. That would never have happened in the old days.
The whole thing is agreeable enough and you definitely need to see it, just as you should watch the 1998-2000 TV series. But I don’t think any twelve-year-olds will be bowled over, learn the dialogue by heart and never forget the experience for the rest of their natural born days.
PrevPreviousRed River (United Artists, 1948)
NextMr. Horn (CBS TV, 1979)Next