.
Not the world’s greatest Western but Fred superb
.
.
Not everyone thought Fred MacMurray the greatest Western star but, you know, in Quantez, his seventh of eleven oaters (depending on your definition of a Western) he is absolutely superb.
.
.

.
The movie itself is good without being great. It was a rather typical Universal offering of the 1950s, which had some good cinematography of attractive Western locations, workmanlike directors and writers, and quality acting of a slightly sub-stellar kind. Universal didn’t have the wealth of MGM, Paramount or Warners but they did produce solid, even quite classy ‘smaller’ pictures, and this is one.

Quantez was directed by Harry Keller (left), who had been an editor at Republic for years (he worked on the delightful John Wayne picture Angel and the Badman), doing lower-budget Westerns and noirs, before graduating to directing Allan Lane oaters in 1951. Quantez was his first Western for Universal, and the following year he would direct another one with Fred, Day of the Badman, which was rather good.
The chief weakness of Quantez is that although we get some nice and typical Universal out-of-doors shots at the start and end (Sonoita and Coronado, AZ locations) the majority of the picture is done on unconvincing studio sound stages. In many ways the small cast (really, it’s just five outlaws and a visiting drifter) and the intense interaction between them, as well as the studio settings, combine to make it a stage play, more suitable to the theater. The CinemaScope was wasted. Fortunately, the writing and acting is good enough to carry it off. Often, Westerns that have limited action and outdoors settings and are very talky are pretty weak. In fact The New York Times review of the time said, “Very little happens, and what does happen, mostly snarling conversation, could hardly be duller. In an era when even the poorest Westerns manage to vibrate with flying hoofs, bullets and arrows, this one remains static, turgid claptrap.” That was too unkind. This Western gets away with it. It is tense and powerful.
.
. 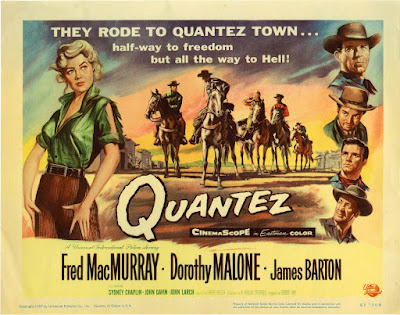 .
We open to dramatic Herman Stein music as five riders cross a desert. We soon discover they are outlaws being pursued by a posse. They are led by sneering tough-guy Heller (John Larch). Gentry (Fred) is a shrewd and canny number two. And we have Teach, a young gunman (John Gavin) and El Gato (Sydney Chaplin), a ‘man who knows Indians’. And there is the gorgeous Dorothy Malone as Chaney, Heller’s woman. They avoid the posse and take refuge in Quantez, a dusty border village which is strangely deserted (not the first time this has happened in Westerns, eh, e-pards?)
.
.

They arrive in Quantez
.
Right away Larch has gloated over shooting down a man in the robbery and Fred has said that there was “no need to kill him”. Fred is also gallant to Dorothy and cares for the horses (rather like Robert Ryan in The Professionals) so we know he’s a classic good badman, in the William S Hart tradition (though more gritty and modern). And indeed, this is the persona he develops when they are holed up in the ghost town. MacMurray handled it with consummate skill. Unshaven, taciturn, good with a gun, he is totally convincing as a badman, yet he clearly has good-guy qualities. And indeed he proves finally heroic. 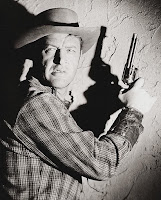 John Larch (right) was rarely better (maybe as Dirty Harry’s chief of police). Usually a policeman, soldier, attorney or politician on TV, Larch had a good line in Western TV shows and big-screen oaters too, starting with a small part in a Bill Elliott oater in 1954, then bad guy Bodeen in Seven Men from Now (and by the way, men with –een names are invariably baddies in Westerns), Man from Del Rio, and, in 1957, a small part in another Fred Western, Gun for a Coward. His craggy face and bulbous nose are instantly recognizable. If anything, in Quantez, he is too bad, and the writing and direction should really have moderated the badness a little. Westerns which have good guys with weaknesses and bad ones with saving graces are always better. But he’s pretty damn objectionable as the gang leader and we are happy when he gets his just deserts.
As for Ms Malone, I think I am in love with her still. Oscared and Golden Globed as she was, I couldn’t care less about Peyton Place, I just think of her losing out to Anthony Quinn as Henry Fonda’s amour in Warlock, being Jeff Chandler’s lady-love in Pillars of the Sky, hovering between Rock and Kirk in The Last Sunset, dallying with Randy in The Nevadan, being ‘the other woman’ in Colorado Territory, and being John Lund’s squeeze in Five Guns West (same writer as Gun for a Coward). Best of all, for me, was her going to the aid of her man Jack Slade with a derringer in a bar fight. That’s my kinda gal. Anyway, she was fab. And here, she is in many ways the central character. All the gang fancy her (and she flirts with them all in her attempt to escape). She is frightened, vulnerable, yet gutsy. It’s a great performance.
.
.

La Malone
.
El Gato turns out to be a double agent (spoiler alert, oops, too late) because though white, he grew up with Cochise’s Apaches and hates the white eyes. Ironically, the Apache he betrays his fellow gang members to is Cochise – well, it’s Michael Ansara anyway, who was Cochise in the 1956 – 60 ABC serialization of Broken Arrow. It doesn’t so El Gato any good, though. He falls, pierced by an Apache arrow. (Oops. Again.)
.
. 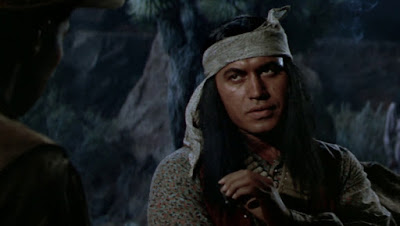 Ansara is an Apache but not Cochise
.
The fight in the horse waterhole is pretty good and there’s a pianola (I do like Victorian gadgets in Westerns).
When Puritan, a wandering minstrel, appears (James Barton) we get La Malone at her sexiest, for he is also a portrait painter and she sits for him in a red décolleté plongeant. But I guess you have to be a man. Anyway, more importantly for the plot, he sings a song of one John Coventry, gunfighter extraordinaire, and it pretty well immediately becomes apparent that Fred’s character ‘Gentry’ is really this Coventry. He is on the run from gunslinging and has vowed never to kill anyone again. Ah, but will he keep his vow? For there is bound to be a Larch/MacMurray showdown in the final reel…
.
. 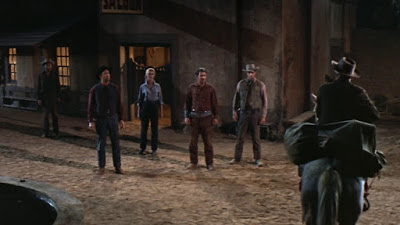 The minstrel arrives
.
It’s all exciting stuff.
No, it is, actually, within the limits of 1950s Universal mid-budget Westerns.
The ending symmetrically mirrors the opening, when the (surviving) gang members gallop out pursued by Indians, just as they had galloped in being pursued by the posse. Finally, Fred…
.
. 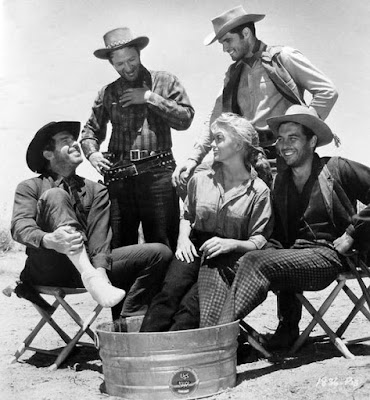 On the set
.
No, that would be a spoiler too far.
Good Western, though, despite the limitations, and MacMurray was rarely better.